Arsenal star and national vice-captain Steph Catley (94 caps) will be joined by Melbourne Victory young gun Kyra Cooney-Cross (12 caps) in the squad that will playoff against the U.S Women's National Team at Stadium Australia in Sydney (27 November) and McDonald Jones Stadium in Newcastle (30 November).

The first game of the series will mark the first time the Commonwealth Bank Matildas will play at Stadium Australia, as they look to break their attendance record of 33,600 set against Sweden at the Sydney 2000 Olympic Games.

"There truly is a no more exciting challenge for the team than to be taking on the world number one team, in front of thousands of passionate fans, in the stadium where the FIFA Women’s World Cup final will be played in 2023,” Gustavsson said.

“This could not be a better dress rehearsal for a World Cup final and we are going to treat it in the same way. From when we arrive, to those match days with what we hope will be record crowds, this is our chance to prepare for the big moments that want to be a part of in 2023.”

Captain Sam Kerr and vice-captain Steph Catley headline the 21 players returning from October’s Brazil series. While experienced England based duo Hayley Raso and Emily Gielnik are recalled following recovery from injury, with the latter in line to record her 50th international appearance for the Commonwealth Bank Matildas.

At the other end of the spectrum, Commonwealth Bank Young Matildas centre back, Jessika Nash and forward Charlize Rule will receive their first senior team introduction as they join the significant cohort of players in 2021 to be provided with the opportunity to experience the national team training environment.

“In selecting the squad, balance was at the heart of the decision making,” said Gustavsson. “We know that this is our final occasion to see the group together before announcing the squad for the AFC Women’s Asian Cup next year, and our focus remains on this crucial preparation.”

“However, with another camp at home, we didn’t want to miss the chance to expose another two young players to our standards and team philosophy, and to find out whether they can be a part of the building of depth towards the FIFA Women’s World Cup in 2023.”

The final matches of Australia’s 2021 international schedule, fans are eagerly taking advantage of the affordable ticket prices with junior registered participants, 12 years and under, accessing $5 tickets across all ticket categories with an accompanying adult or concession ticket purchase.

Network 10 will broadcast the two-match series live and free, with coverage simulcast on 10 Play. 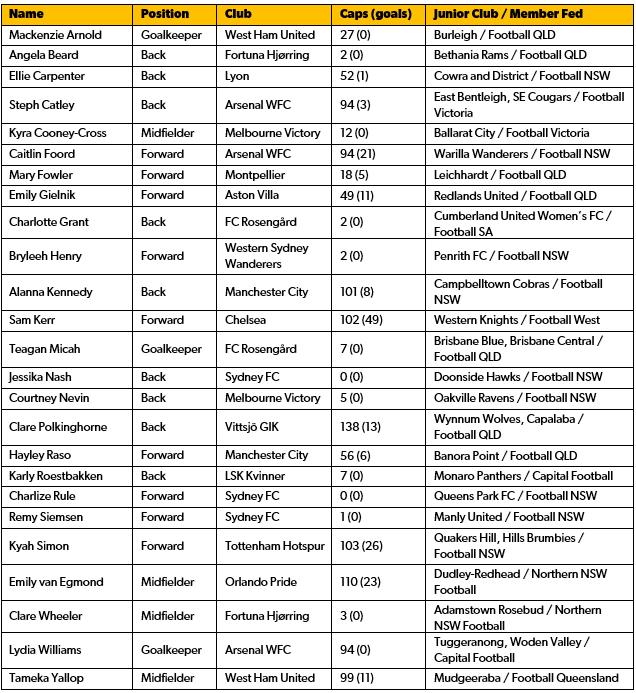