A third of the 2021 NPLW Victoria season is now in the books and, with each side having now played each other at least once, the intense battle for positioning amongst the top-four shows no signs of abating.

Thanks to a quirk in the scheduling, the Victorian top-flight’s top four sides each met a member bottom-four of the table across the most recently completed weekend and, in a blow to the romanticists amongst us, the results were about what one would expect. 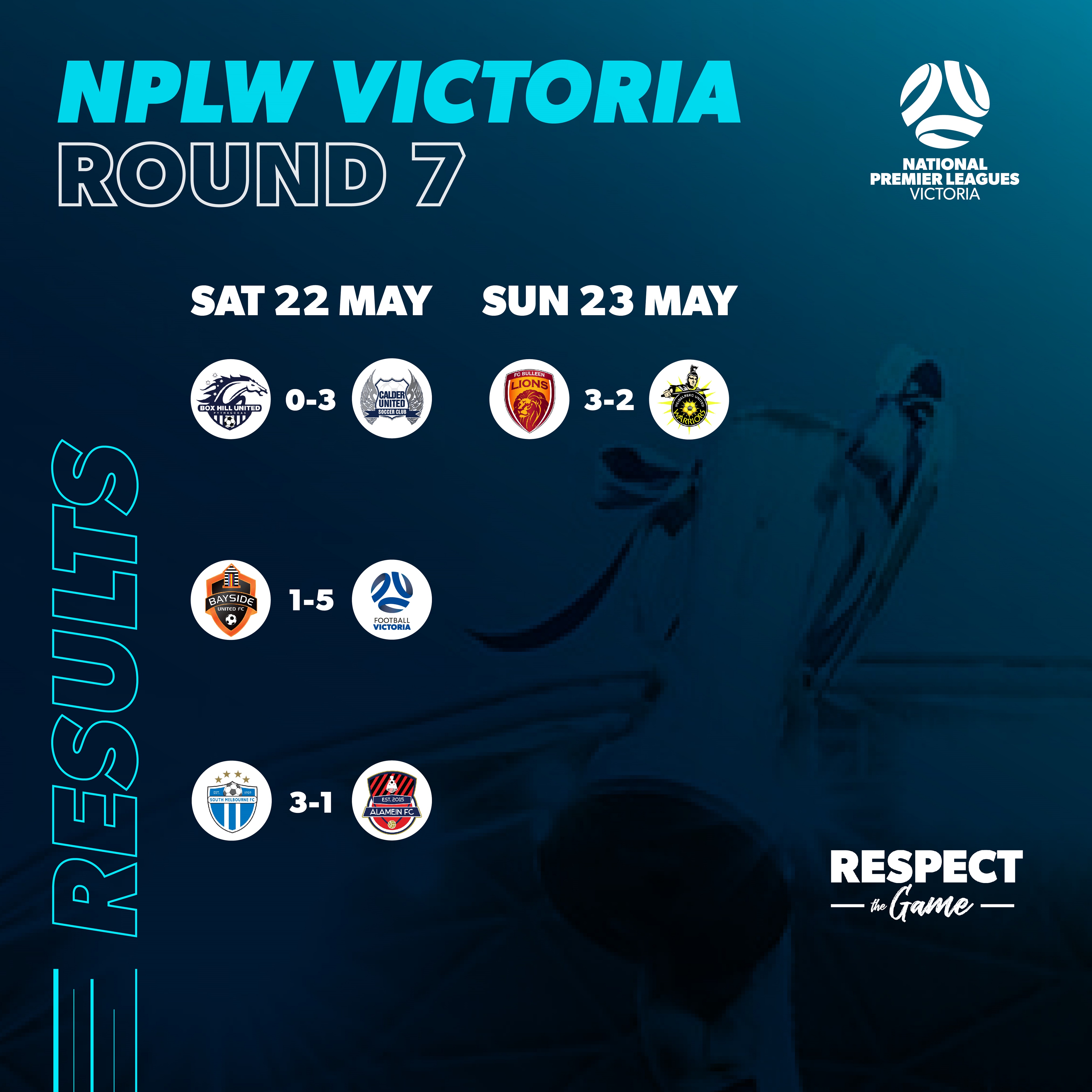 First placed South Melbourne, second-placed Calder United, third-placed FV Emerging and fourth-placed FC Bulleen Lions all triumphed in their games across the weekend - keeping their jostling for position amongst themselves tight whilst further widening the gap between themselves and the chasing pack.

Hoping to keep pace with league-leading South, defending 2019 champions Calder opened the round by heading to Wembley Park on Saturday afternoon seeking to take three points off second-bottom Box Hill.

And things did start brightly for the visitors when, running onto a ball played in behind the Box Hill defence in the 12th minute, Harriet Withers smartly fired past Erin Hudson to net her fifth goal of the season and make it 1-0.

Hudson proved up to the task of denying the former Melbourne City attacker when a turnover in the 40th minute enabled Calder to spring forward rapidly in transition but, alas for Pythagoras fans, she could do nothing to prevent Aleksandra Sinclair from collecting the loose ball and firing home to make it 2-0.

It took a while, but Sinclair then grabbed her second of the game and 8th goal of the 2021 campaign when she was picked out in acres of space by a superb Catherine Zimmerman cross and strongly headed beyond Hudson in the game’s final minutes.

Elsewhere on Saturday afternoon, FV Emerging snapped a two-game losing run and got back to their winning ways by recording a comfortable, 5-1 win over Bayside United down at Kingston Heath Soccer Complex.

Leia Varley got things going for the visitors when she fired past a statuesque Lauren Farrugia from the penalty spot in the 35th minute and Alana Murphy then netted her fifth goal of the season and made it 2-0 on the stroke of halftime when she pounced on a ball Farrugia had been forced to palm away after a high Varley free-kick.

It was a relatively comfortable 3-0 in the 59th minute when Ellie Vlaeminck waltzed down the right flank and cut the ball across for a simple tap in for Holly Furphy, and it was subsequently 4-0 just seconds later when Murphy got down the right again and whipped a ball into the back post that Francesca Iermano headed home.

Rachel Stirton did get one back for the hosts when he burst forward into space and dinked a high effort in on goal that, despite Sophia Varley getting a hand on it to force it skyward, nestled into the back of the net.

Emerging, though, had one left salvo left to fire and made it 5-1 in the 72nd when Ashley Jordan cut inside on a fine solo run and lashed a nigh-unsavable effort in from outside the penalty area.

Table-topping South's meeting with Alamein FC on Saturday afternoon was made notable even before a ball had been kicked; Hellas announcing prior to kick-off that Matilda Jenna McCormick had signed a deal with the club and was set to start at the heart of their defence.

A former Adelaide United, Melbourne Victory and Melbourne City enforcer, the 26-year-old was a participant - alongside new teammate Melina Ayres - in a recent Matildas’ training camp in Sydney and has worn the green and gold on four occasions.

Things didn’t start all too swimmingly for the South Australian-born defender’s time at South, however, after Alamein’s Jennifer Lum hustled and bustled her way into the host’s penalty area and won her side a penalty on the half an hour mark.

Caitlin Storay made no mistake with her subsequent effort - sending it in off the shins of goalkeeper Melissa Barbieri to make it 1-0.

Spurred to life by their fifth-placed foes taking the lead, some fantastic interplay from South delivered them a leveller in the 40th minute of the opening stanza after Reona Omiya was played in on goal and made no mistake with her subsequent effort against Beth Mason-Jones.

Omiya then turned provider four minutes past the hour mark when she collected the ball in her own half, looked up and placed a perfectly weighted lob over the Alamein defence and into the path of an onrushing Caitlin Pickett - who finished one-on-one with Mason-Jones - who was vital to Alamein's efforts to keep the game close - to make it 2-1.

Sprung by a well-threaded pass in behind the visitor’s defence from Ayres, Lucy Johnson then sealed the result for Hellas by firing into the bottom corner of the net.

The win by coach Sam Young’s side ensures that they remain three points clear atop the NPLW Victoria after seven games - with their loss against FV Emerging the sole blot on their copybooks.

FC Bulleen Lions were forced to sweat a bit more than they likely expected in the weekend’s final matchup but, eventually, were able to ensure it was a clean sweep round for NPLW Victoria’s top four by recording a 3-2 win over Heidelberg United at the Veneto Club.

Heidelberg opened the scoring after just seven minutes on Sunday evening when, after a rare mix-up between stalwart Bulleen contributors Kayla Morrison and Rachel Quigley and some alert defending from 16-year-old debutant Maxine Di Blasi, they broke quickly in transition through Sidney Allen.

Gathering herself, Allen then lifted a ball into the exact space that Keely Lockhart needed to allow her to place a side-footed lob over the head of Bulleen keeper Gaby Garton and make it 1-0.

But the hosts were able to level things up when Quigley, reacting quickest after Penny Bakopoulos blocked a Claudia Fruscalzo cross in her direction, pounced on the resulting loose ball and fired beyond Melissa Maizels to make it 1-1 in the 41st minute.

Disastrously for Alexander, though, that wasn’t where the first half damage by the hosts ended, with Bakopoulos inadvertently turning a Lara Shannon cross into her own net seconds into the opening stanza’s injury time.

Forcing a turnover in the 54th minute, the Lions then made it 3-1 when they worked the ball forward to Quigly in transition, with the number ten promptly cutting a ball back across the face of the goal for Lia Privitelli to fire home.

Her Berger side continuing to battle, Lockhart went down under a heavy challenge from Tiffany Eliadis in the 74th minute to win her side a penalty promptly dispatched into the bottom left corner of the net by Allen.

Unfortunately for coach Johno Clemente’s side, that was the extent of the scoring out at David Barro Stadium - coach Caitlin Friend’s Bulleen making it five wins on the bounce and doing their bit to keep up with the final’s race. 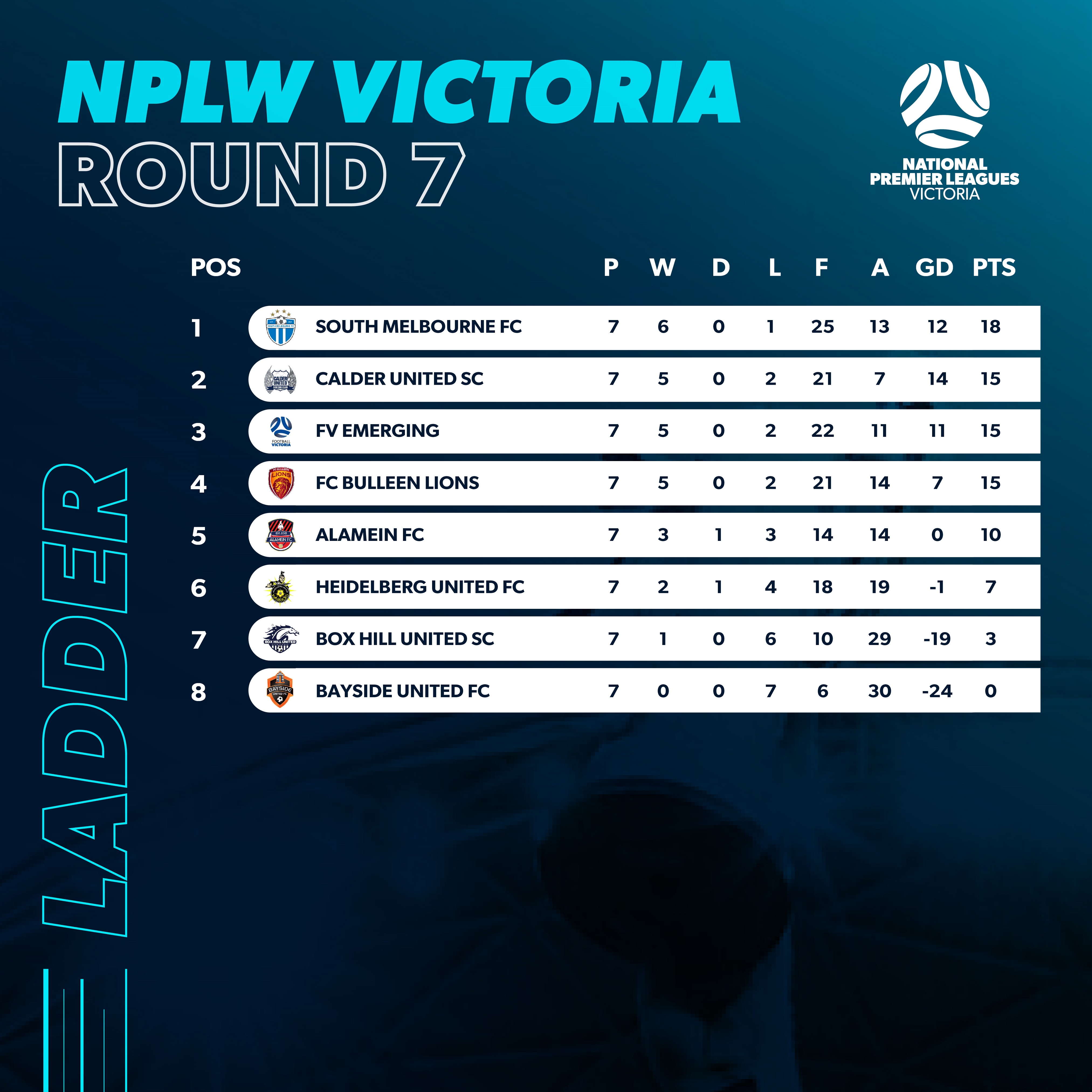