Round 10 of NPLW Victoria action saw four contests separated by a single goal. The league leaders have been knocked off their perch while some sides near the bottom of the table made positive strides. For others, there were positive signs but they find themselves still languishing at the wrong end. The middle of the table is starting to bunch closer together as the gap to the top gets wider, but as we’re only just hitting the mid-point of the season, there is still everything to play for heading into Round 11.

Alamein can’t seem to catch a break of late. For the second time in as many weeks they have been at the wrong end of an injury time winner as they went down 1-0 to South Melbourne on the weekend.

Tonight they hope to turn their fortunes around when travel to Wembley Park to take Box Hill United.

Box Hill ended a three game run without a win last Saturday when they edged out Bayside United 1-0 at Kingston Heath. A strike from Sofia Sakalis within the first five minutes proved all that was needed to earn a welcome three points.

The win saw them jump ahead of Alamein in the table thanks to their two extra goals so far this season. Both sides competing tonight are level on both points and goal difference, with outright fourth in the table up for grabs for the winner. 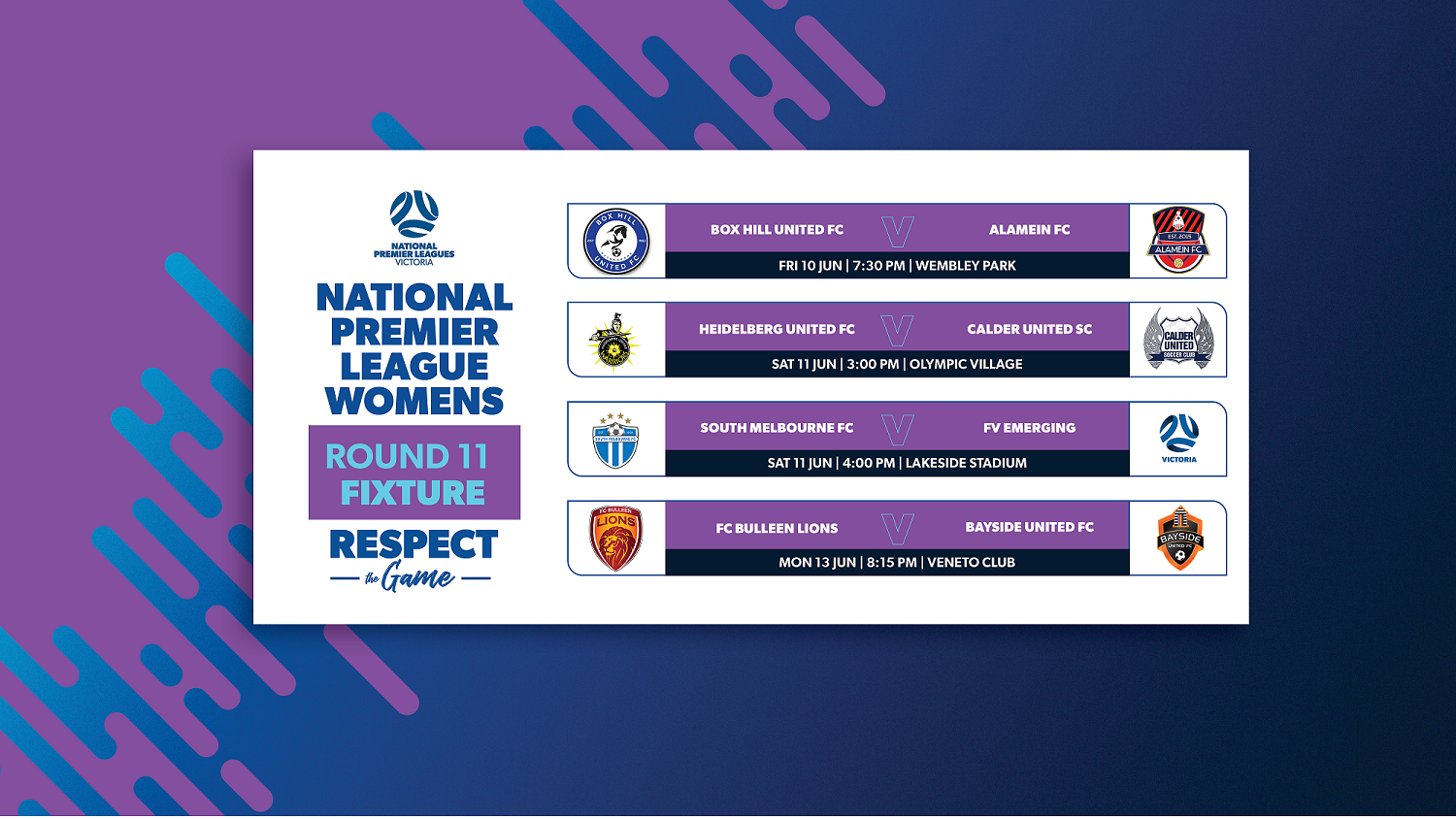 Kat Smith will be hoping her side have used up all their bad luck for the season, and that they can start to turn the tide this weekend. They will need to start finding the back of the net a bit more frequently, as a stout defence can only get you so far. Alamein’s 10 goals this season is the second lowest tally of all the NPLW Victoria clubs.

There really is little to separate these two sides, as along with their shared amount of points and goal difference, they also shared the spoils when they last faced each other back in April.

On that day it was Alamein who benefitted from some late drama, as Jamilla Hull equalised in the 93rd minute to secure a point.

Calder United’s relentless form has seen them finally take their place atop the NPLW Victoria tree. Their narrow 1-0 victory over Bulleen Lions was enough climb above Heidelberg United who were stunned by FV Emerging on Sunday.

This weekend Heidelberg welcomed Calder to Olympic Village for a delectable top of the table clash. The Bergers seemed to be coasting with a 2-0 lead at Knox on the weekend, before a huge second half fight back from FV Emerging saw the young guns steal all three points in injury time.

They can’t afford another lapse like that this Saturday against a rampaging Calder side. Having only conceded three goals in all competitions this season, the new league leaders’ defence hasn’t been breached since April. They have no trouble scoring either, their 27 goals this season the most of any team in the league.

Interestingly, the last time they conceded a goal was when they conceded two against Heidelberg back in Round 4, when the Bergers handed them their only loss so far in 2022.

If the women in yellow and black are to repeat that result they will need captain Steph Galea to continue her rich vein of form. Galea netted her ninth league goal of the season on Sunday, her 11th in all competitions this season.

For Calder, their six straight league wins have seen 12 different goal scorers, with sharing the load a theme for the side from Keilor Park this year. Captain Aleksandra Sinclair, who celebrated her 100th game on the weekend, will hope nothing changes as her side look to extend their lead at the top.

This week they welcomed an FV Emerging side fresh off a thrilling, last gasp win of their own against Heidelberg. Emerging had been looking for a spark after a run of underwhelming results, and they got exactly that when they came out after half time to overturn a 2-0 deficit.

The week got even better for the young side a few days later when three of their squad (Isabella Accardo, Ava Briedis and Alana Cortellino) were selected for the upcoming Junior Matildas training camp later in June.

Helen Winterburn’s side are now looking up the table as a win against South would see them well and truly back in the hunt for a finals place.

The same can be said for South, however, who have looked a team reborn in recent weeks and all of a sudden could find themselves in the top four with a win on Saturday.

Janna Lawson’s goal of the month candidate was her 15th in all competitions and fifth in her last three games. The star forward also scored when South last played Emerging back in Round 4.

Meanwhile, Emerging’s Candice Kilderry netted a brace against the Bergers including the injury time winner for her side. She sits equal with captain Sarah Cain on three goals as joint top scorer this season. Cain netted twice in what was a wild six goal thriller the last time these two sides met.

After a strong start to the season, FC Bulleen Lions have been on a lean run recently. They are without a win in their last five, which has seen them lose touch with the top two in the table.

Now sitting only three points above Box Hill and Alamein, they could use a spark to avoid being dragged into a mid-table scrap. On Monday night they welcome the struggling Bayside United to the Veneto Club to round out this weekend’s NPLW Victoria action.

It’s been tough going for Bayside, who sit bottom of the table without a win yet this season. After some heavy defeats in recent weeks it can be hard to find positives, however there were signs of improvement over the weekend.

Despite the 1-0 defeat to Box Hill, Bayside showed a defensive stoutness that has been lacking of late. They were able to hold their opponents off for large portions of the game, and created chances themselves, with Julia Budiongo unlucky not to find the back of the net on a couple of occasions.

The Bayside faithful will be hopeful that their side can build on this come Monday night.

For the Lions, despite their lean league form of late, they were able to progress to the semi-finals of the Nike F.C. Cup last week. They will also head into this clash with the confidence of knowing they put seven past Bayside when the two sides met earlier this season.

Another performance like that would come at the perfect time to get their league campaign back on track.