Five rounds of the NPL Victoria season are now in the books and though no side has truly emerged as the class of the competition, two very familiar names reside atop the state’s summit.

Holders of six national titles between them, Melbourne Knights and South Melbourne have emerged as the out-right first and second on the ladder respectively after the Victorian top-flight’s opening quintet of games; coach Steve Bebic and Esteban Quintas’ teams making good starts to their quests to add more silverware to their club’s overflowing trophy cabinets in 2021. 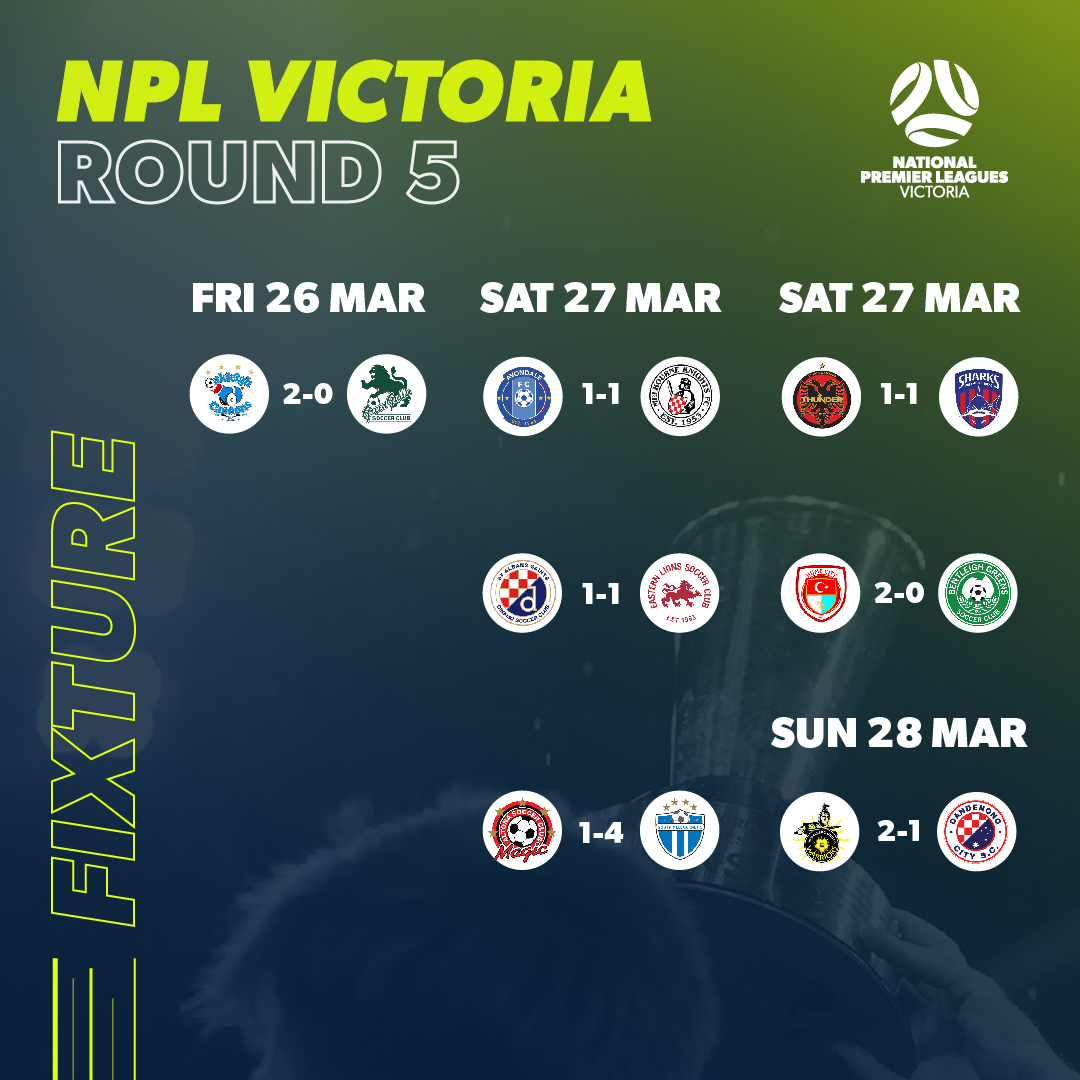 Entering round five atop the Victorian heap, Knights faced one of their stiffest tests of the season to date when they travelled to the Reggio Calabria Club to take on Avondale FC on Saturday afternoon; the Avengers entering the game knowing that three points would see them leapfrog the visitors in the standings.

And when Joey Katabian picked out Yusuf Ahmed with a perfect cross-field diagonal ball in the 78th minute and the attacker promptly cut inside and blasted a shot beyond Tom Manos at the near post, it appeared as though coach Zoran Markovski’s side was well on its way.

But Croatia refused to go down without a fight and was rewarded for their endeavour in the 93rd minute when Caleb Mikulic rose to meet a cross and perfectly placed an unchallenged header into the back of the net to secure the visitors a valued point.

The disappointment for Avondale would subsequently be compounded later that evening when South Melbourne - having previously served as one of the competition’s most profligate sides, despite their undefeated nature - exploded into life with a 4-1 win over Altona Magic at Paisley Park.

Admittedly, thumping a reeling Magic unit still looking for its first win of 2021 and that had just replaced John Markovski with Archie Davis in the dugout - the first coaching change of the season - may not carry the same weight as a hammering of Knights, Avondale, or Oakleigh - but it’s unlikely Hellas fans care much.

They likely would have been perturbed, however, when the Magic’s Antonee Burke-Gilroy opened the scoring for the hosts in the 29th minute of play, only to then be somewhat placated when Marco Jankovic squared things back up in the 36th.

Harrison Sawyer was off spot-kick duty after his miss against Port Melbourne the previous week, Gerrie Sylaidos stepped up to convert a penalty won by Jankovic in the 44th minute, before the defender secured his brace in the 57th minute with a close-range, left-footed effort.

Daniel Clark then added one late - his first of the season - to put the contest to bed and send South second.

Not to pick on the Avengers, but further consternation arrived for them throughout the weekend as heavyweights Oakleigh Cannons, Heidelberg United and Hume City all moved equal with them on points; only Avondale’s league-leading record in front of goal keeping them in third place on the table.

Coach Chris Taylor’s Cannons were the first to make their move onto eight points when they downed Green Gully 2-0 at Jack Edwards Reserve on Friday night for their second win on the bounce and Gully’s second defeat in succession.

Tyson Holmes sent home a Wade Decker cutback for his first goal of the season in the 16th minute to put Oakleigh in front, a lead which was doubled four minutes later when Matt Thurtell - who had looked very dangerous early on - slid in to send a loose ball beyond Gully keeper Jerrad Tyson following a chaotic Cannon corner.

In the first game staged at Heidelberg United since it began its much-anticipated renovations, the Bergers did their best to dissuade any late arrivals from even bothering to rock up: taking a commanding, 2-0 lead over Dandenong City after just six minutes of play.

It was new signing Eoin Ashton that delivered the devastating combination for George Katsakis’ side; driving an effort from atop the penalty area beyond Jasmin Keranovic in the third minute of play before reacting quickest to a saved Dusan Bosnjak shot three minutes later and sliding the ball into an open goal.

Though the win brings Alexander’s unbeaten run to four and makes it two wins on the trot, the result piles further pain on Dandenong City: Hajduk still looking for their first win in 2021 and holding onto just a solitary point from their round one draw with Dandenong Thunder.

The Thunder, for their part, backed up their first win of the season last week by playing out a 1-1 draw with Port Melbourne Sharks at George Andrews Reserve.

Benefiting from some excellent setup work down the left flank by Giuseppe Marafioti, Nahuel Bonada continued his strong start to the season when he put hosts ahead in the 34th minute, only for the Sharks - playing without first-choice keeper Andrew Withers due to suspension - to return the game to an equilibrium in the 67th minute when high-profile new addition George Mells shot true.

That result keeps the Thunder and Sharks level on five points and in the tenth and eleventh place on the table respectively, with the pair prevented from slipping down the ladder by St Albans late, late fight-back against Eastern Lions on Saturday afternoon.

The Lions - who have rebounded well from their heavy, opening day defeat to Bentleigh Greens - opened the scoring at Churchill Reserve in the 37th minute of play when Chris Droutsas met an in-swinging corner off the left peg of Ziggy Razuki and nodded home.

Heartbreakingly for coach Daniel Puşcaşu’s side, however, Dinamo was able to rally and - much like sister-club Knights had done earlier that day - find an equaliser during extra-time: Mate Barisic calmly depositing the ball into an open-net from atop the six-yard-box after some superb build-up play from Joey Monek.

In the weekend’s final contest, Hume rebounded from their first defeat of the campaign the previous week to down Bentleigh at ABD Stadium: moving into the aforementioned four-way tie between third and sixth position on the table and consigning coach Nick Tolios’ Greens to their second defeat of the season.

Getting to a Harry Bingham cross ahead of Javier Lopez in the 68th minute of play, Mark Delic nodded home to give coach Nick Hegarty’s side the lead in the fixture, before Mitch Cooper doubled Hume’s advantage and won them the game when he came off the bench to score his first goal of the campaign in the 81st minute of play.

Falling to ninth as a result of the defeat, the Greens will have to lick their wounds and recover quickly if they want to bounce back at the first available opportunity, with every game of round six of the NPL Victoria season - passing the five rounds the 2020 season managed before its COVID-enforced cancellation - set to be staged this Wednesday evening. 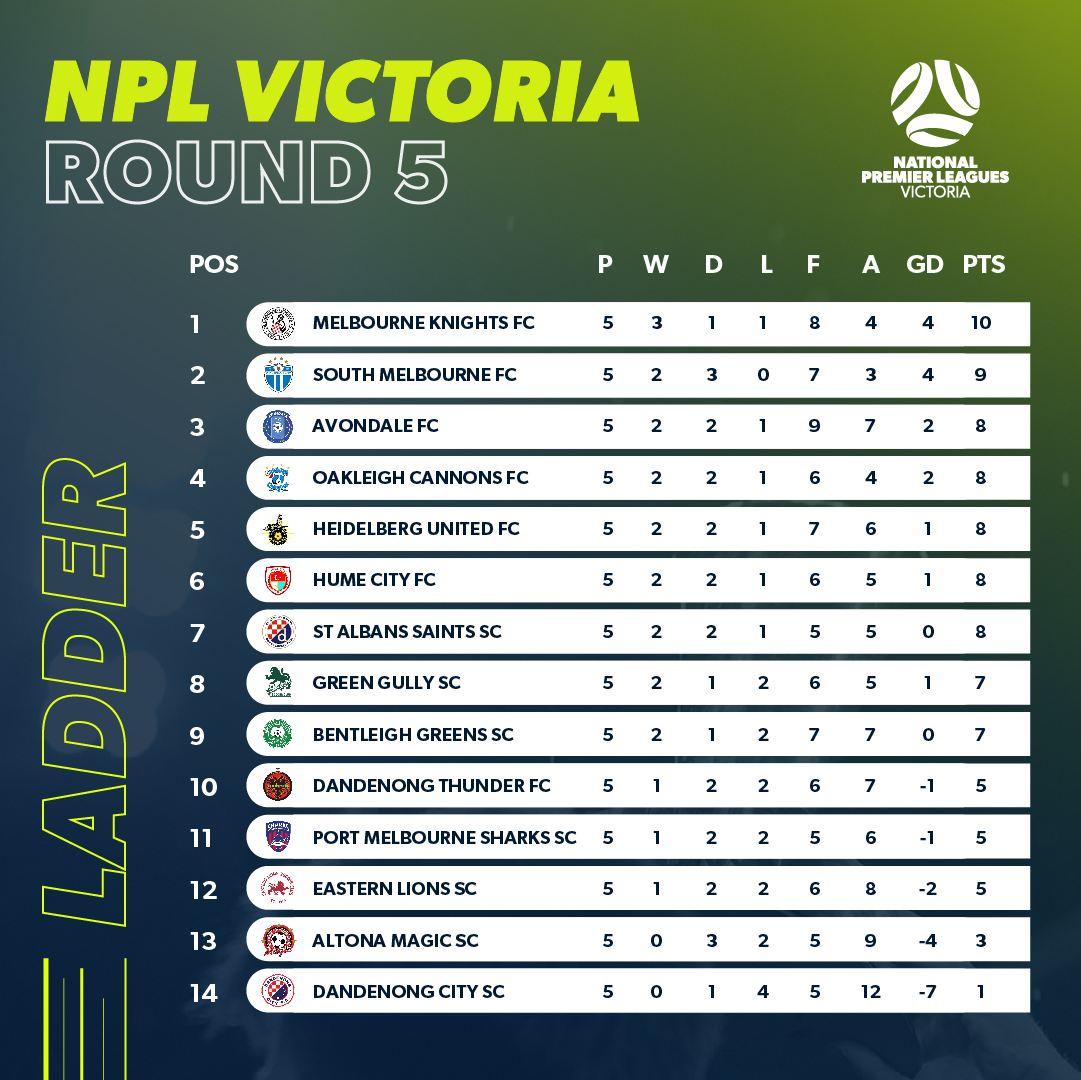