It began back in February, when 55 clubs from Victoria’s State League 5 and regional leagues squared off. Across the weeks and months that followed, 155 more clubs would join them across fields all across the state.

As a reward for their survival, these four clubs from the Victorian top-flight will do battle on Tuesday and Wednesday evenings for the right to face off for one of the oldest and most celebrated trophies in all of Australia football: the Dockerty Cup. 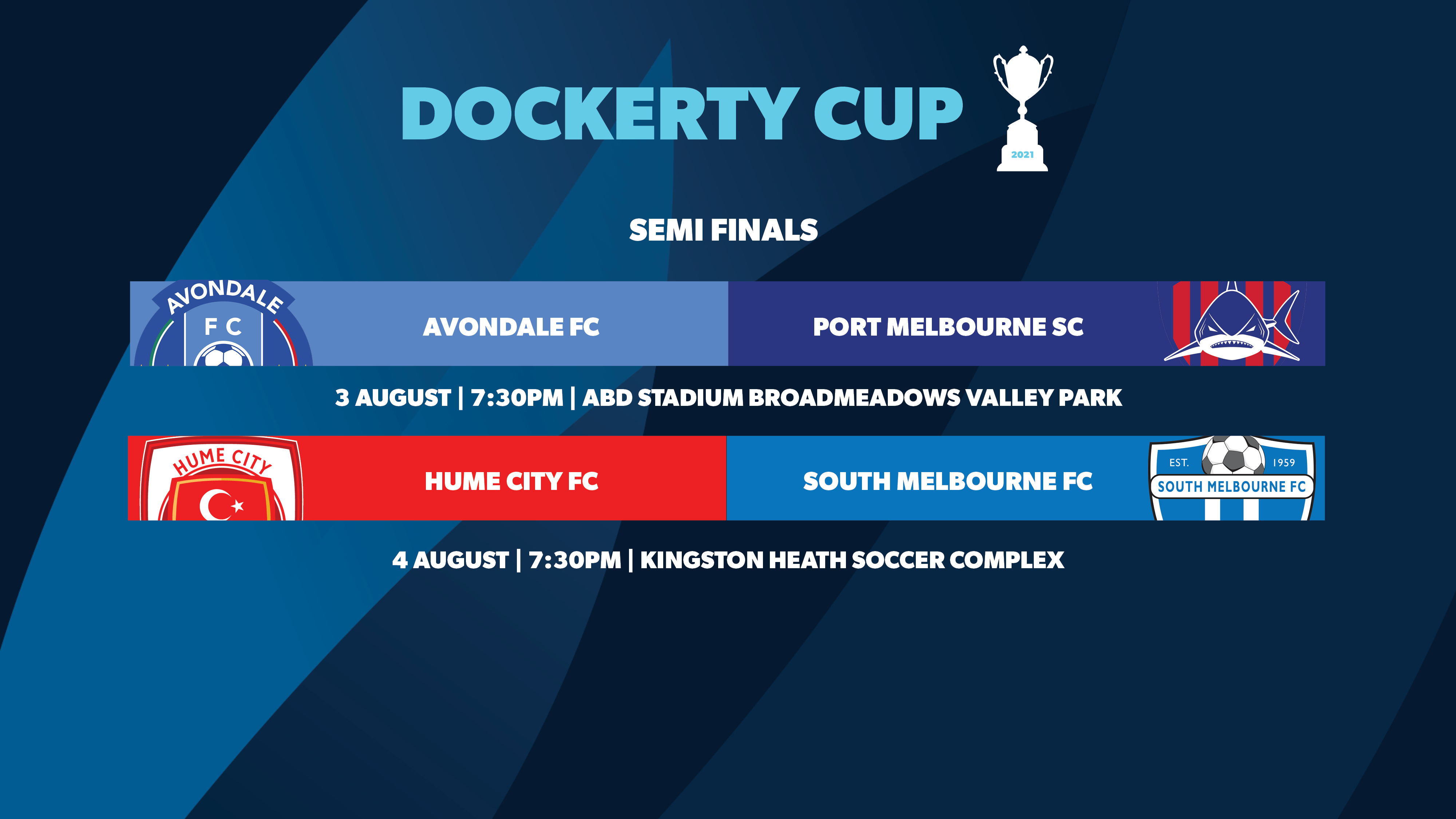 Named for the man that donated it, Football Victoria Hall of Famer Harry Dockerty, the trophy was first won by Carlton United FC in 1909 and, with a few periods of hibernation mixed in, has been a regular part of the Victorian football scene in the 112 years since -- Melbourne Knights the most successful club in its history with nine wins.

These days, the competition shares its preliminary stages with the FFA Cup -- before splitting into unique semifinal matches at the onset of the latter’s national stages.

And due to last year’s iteration of the competition lost to COVID-19, Hume will run out onto Kingston Heath Soccer Complex’s surface to do battle with South Melbourne on Wednesday as the reigning holders.

Having fallen at that hurdle in 2015, 2016 and 2017, the side from Melbourne’s Northwest finally got the semifinal monkey off their backs when they downed Moreland Zebras 1-0 in the semis of the 2019 iteration, before dashing Knights’ hopes of a tenth crown in the final at Kingston Heath Soccer Complex.

Torrential conditions prevailing overhead, it was current Nunawading City player James Brown’s 28th-minute goal proved the difference maker between the two sides on that day -- securing a 1-0 win for his side.

This year, coach Nick Hegarty’s team had a 3-0 walkover against Warragul United to begin their journey through the Cup before comfortably dispatching State League side Frankston Pines 3-0 in the next round at ABD Stadium.

A 3-0 win triumph over fellow NPL Victoria side Bentleigh Greens followed, before State League side Monbulk Rangers’ fairytale Cup run was ruthlessly ended via another 3-0 margin at the Monbulk Regional Soccer Facility.

At the tip of a high-powered Hume spear that has the pace and power to strike at a moment’s notice, former Central Coast Mariner Josh Bingham looms as the potential difference-maker for his side: the striker netting 13 goals thus far in the 2021 NPL Victoria campaign.

For their part, Bingham’s foes in South Melbourne can equal old foes Knights with nine Cups should they triumph in this year’s iteration -- a ten-year ‘drought’ broken when they last saluted in 2015.

Hellas’ quest for this year’s crown began by defeating NPL2 side Werribee City 6-3, with a nervy penalty shootout win over Knights following in the next round.

Goals from Marco Jankovic and Lirim Elmazi subsequently propelled them past Eastern Lions before, in dramatic scenes at Jack Edwards Reserve, coach Estaban Quintes’ side won their way through to the national stages of the FFA Cup and the semifinals of the Dockerty Cup via a penalty shootout win over Oakleigh Cannons.

South, undoubtedly, have the ability to keep Hume at bay in the coming contest -- possessing the second stingiest defence with just 18 goals conceded. However, this steadfastness at the back has been accompanied by profligacy up front that they will need to overcome: their 19 goals scored their equal-third worst total in the top-flight.

In a bit of a twist, Wednesday’s contest will arrive just four days after the two last locked horns: Henry Hore putting Hellas ahead 1-0 seconds into the second half on Saturday evening before Alex Walter netted in the 79th minute to force a 1-1 draw at ABD Stadium.

On Tuesday, ABD Stadium will play host to the Cup’s other semifinal as high-powered Avondale FC do battle with Port Melbourne Sharks.

Dominant in league play for more than half a decade without much in the silverware to show for it, the Avengers of Avondale’s chances of a breakthrough Dockerty Cup win has never been better than they are this year: coach Zoran Markovski’s side seven points clear as the runaway leaders of NPL Victoria.

The side from the Reggio Calabria Club began their 2021 Cup campaign by putting six past State League side Beaumaris SC, before downing another State League side in Yarraville FC 2-0 at B.T. Connor Reserve. A 5-1 procession past North Geelong Warriors down at Elcho Park then followed, before they eased past Pascoe Vale 4-1.

On Saturday, the club made it 19 games undefeated in all competitions when they defeated St Albans Saints 2-1 thanks to a brace from the new leader in the NPL Victoria Golden Boot race, Stefan Valentini.

Like Avondale, Port Melbourne -- semifinalists back in 2018 -- will be seeking their first-ever Dockerty Cup in the coming weeks -- Port Melbourne Slavia’s win in 1967 the only previous occasion that the trophy has made its way to Port Philip Bay.

The Sharks started their 2021 Cup campaign with a 9-1 win over Berwick City back in April, which was then followed up with a 1-0 win over NPL2 side Manningham United Blues and a 4-1 triumph over Sydenham Park.

In a re-match of their dramatic 2018 meeting, coach Adam Piddick’s side was then forced to do it the hard way again Moreland Zebras to book their place in the semifinals; coming from behind to secure a 2-1, extra-time win at JL Murphy Reserve. It must be noted, though, that the Sharks were missing key-man Chris Duggan through suspension in that contest.

However, Port’s preparation for Tuesday evening hit a snag on Saturday: downed 1-0 by Oakleigh Cannons thanks to a Joe Guest goal and falling out the NPL Victoria top six.

With restrictions on community sport still in effect, only essential personnel are permitted to attend the semifinals, but fans can watch both live and free on Football Victoria’s Facebook and YouTube pages.