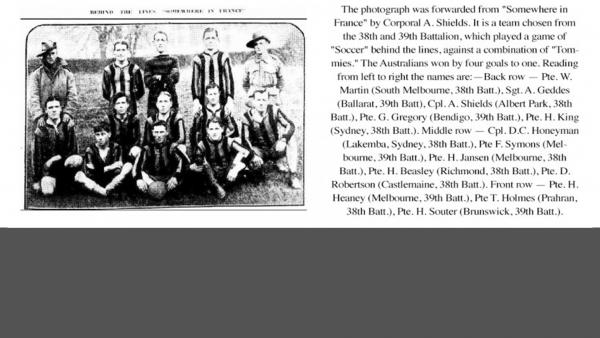 Behind the lines: Victorian soccer and WWI

Originally published 20th April 2015 Dr Ian Syson explores the connection between soccer and WWI. For many Australians, this 1918 photograph and text from the Melbourne Weekly Times (3 August 1918, p.

The Lowe brothers from St Kilda

Originally published 24th April 2015 Four footballing brothers from St Kilda enlisted to fight in the Great War; one never came home, writes Ian Syson. Tales of brothers at war have a powerful emotional appeal. The movie, Saving Private Ryan is a good example of the way

The strange case of Thomas Witham and Whitmore Pink

Originally published 21st April 2015 From starving on Melbourne's streets to a heroes' homecoming in MIrboo North; this is the story of soccer players Thomas Shoesmith and William Preston, written by Dr Ian Syson. On 28 September 1913, two men walked into the Russell St Pol

A gentleman of the game

The last Dockerty Cup before the Great War

Originally published 23rd April 2015 The 1914 final was a stalemate to foreshadow the mind-numbingly futile military campaigns to come, writes Victoria University academic Ian Syson. Unbeknown to many at the time, the Dockerty Cup Final of 1914 was to be the end of a brief