A refereeing legend and FV Life Member, Mike literally coached hundreds of referees to fantastic careers officiating the world game and he will be sorely missed. 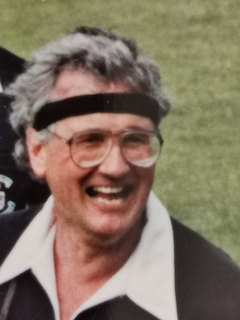 Over the years, he achieved an excellent career as an Assistant Referee in the Philips League and National League.

Due to his distinguished appearance and greying temples, Mike was nicknamed "Clark Kent " or "Superman" by colleagues, players and spectators alike.

His famous head band, was his trademark.

In addition to a distinguished career, Mike organised the Mallacoota Cup Tournament for over 40 years.

When he retired, he became a doyen among referee Assessors, being influential in the careers of hundreds of match officials. This includes our current crop of Hyundai A-League and Westfield W-League officials, with his insightful but honest coaching methods always present.

Mike is a Life Member of FV for his contribution to Referees. Vale Mike Gaut.