The Victorian U17 squad came up against a very strong opposition in the form of Newcastle Jets on Day 2 of the competition. Newcastle tried to press early but were unsuccessful as Victoria broke out of the press easily and controlled the game from the start, looking threatening in the mid to front third of the pitch. The girls penetrated the Newcastle defence through a variety of creative plays, resulting in shots on goal which unfortunately weren’t converted in the first half.

The second half saw a defensively organised Victorian team who were able to prevent Newcastle from getting any success moving forward. The girls continued to control the game with comfortable possession from the back line through to the front including smart forward runs and creative attacking play in the front third. The players continued to find different solutions tactically whilst confidently showing their individual ability. Final score was Victoria 1 to Newcastle Jets 0.

After group stage of the tournament, the Victorians finished first in their group after winning all matches with 8 goal scored and only one conceded. 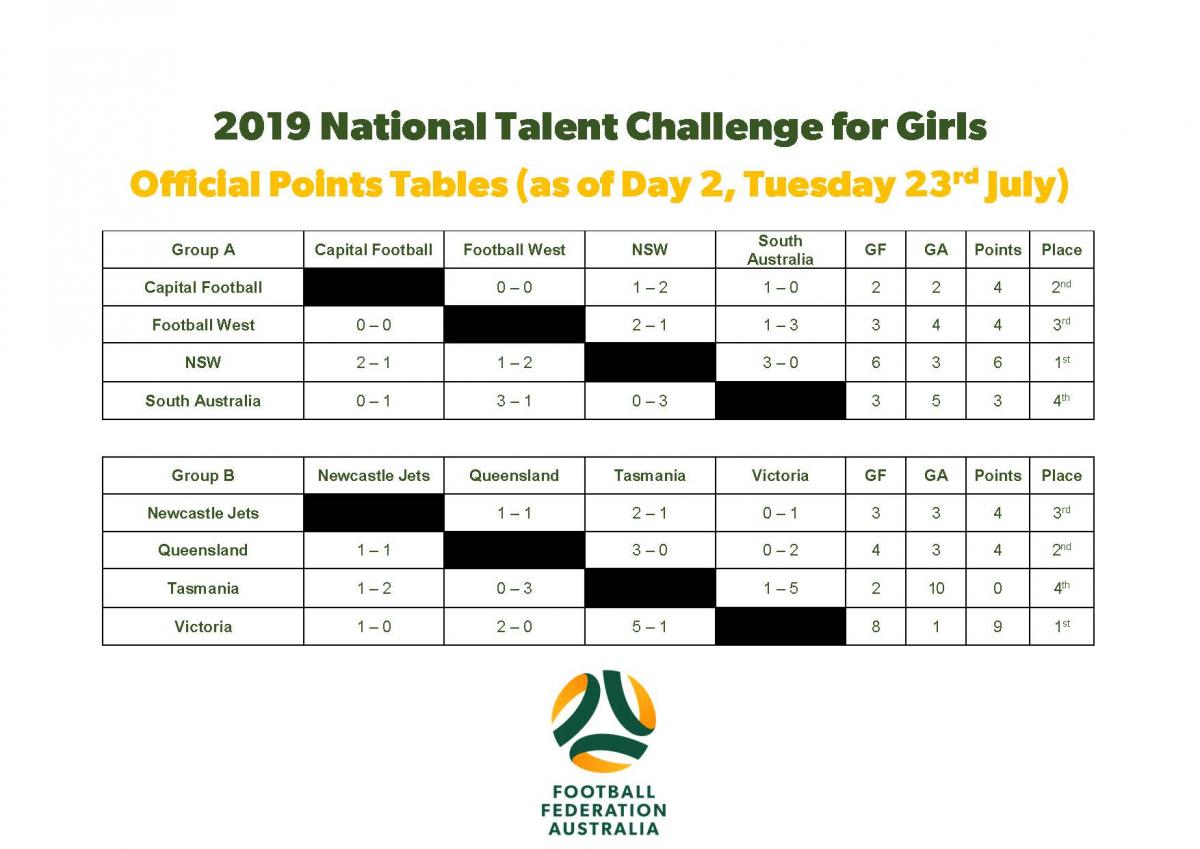 Day 1 saw the Victorian U17 Girls Squad kick off the 2019 NTC Challenge with a match against Tasmania. The team got ahead by applying some pressure early in the game and controlling possession of the ball. A dominant first half saw the team take a 3-0 lead with some aggressive attacking play and positive defensive structure.

7 substitutions were made at half time to allow players to settle into the tournament during the first match. The second half saw the Victorian team continue to break down their opposition in the attacking half but conceded a goal with a nervous error made while playing out under a high press. The players bounced back quickly by creating multiple goal scoring opportunities and converting two. The squad started the tournament on a high by finishing the first match off with a final score of Victoria 5 to Tasmania 1.

Match 2 on Day 1 of the tournament witnessed another dominant performance from the creative Victorian side. The team played out under an organised defensive set up by finding different solutions all over the pitch. The girls continued their relentless attacking play from earlier in the day by taking numerous shots on goal including some shots hitting the crossbar and just flashing past the face of goal. The Victorian team put the Queensland side under stress with a well organised high press which resulted in an intercepted ball leading to a neatly tucked away goal.

With the backing of the one goal lead, the girls went into the second half with more confidence. This enabled the squad to play with more freedom and lead to more creative goal scoring opportunities. Victoria’s second goal came from a mix of a well-structured high press and some individual brilliance, with the fullback intercepting a ball and driving forward to slip a ball past the Goal Keeper into the back of the net. Final score was Victoria 2 to Queensland 0.