Football Victoria extends sincere and deep condolences to the Grace family on the passing of Eddie Grace.

A Tribute to Eddie Grace by Ian Greener

It is with a sad heart that I inform the Victorian football community of the passing of Eddie Grace, or Mr Goalkick as he was known to many. Eddie passed away last month after battling health issues sustained over a long period of time. It has been many years since Eddie retired from Football Victoria but his legacy has lived on, having given tens of thousands of children from all over Victoria, their first experience of football. Eddie was not your typical looking Sport Development Officer but whatever Eddie did was not ‘typical’ of such a position. He was the epitome of the expression, “Don’t judge a book by it’s cover”.

Before I talk about Eddie’s days in football, some background information on the young Mr Grace, courtesy of one of his long-term friends, Michael Connop.

Eddie was born on 8th March 1952 in Deniliquin, or as he used to call it, “God’s country”. Eddie played local cricket in Deniliquin in the 1960’s and was as keen as mustard. He even turned up for one game when not selected, to substitute field for one of the players late on in the game, yet Eddie sat there the whole day in 40-degree heat, in full-whites just to field for ten overs. He was a quality batsman who played the game hard, but fair and soon started to manage the representative teams in the area, guiding young players through their careers. He managed the Bendigo Week representative teams from 1977-1987 and did all the tasks no-one else was keen to do, whilst keeping everyone motivated and enthusiastic with his humour. He also managed the Murray-Goulburn representative team at the State Carnival in Mildura in 1983, losing the title on percentage in a week when they were unbeaten.

Along with cricket he was also a keen Australian Rules follower, playing for Deniliquin Rams, Deniliquin Rovers and Blighty, winning flags along the way. He was recognised for all his efforts locally in 1986 with the Bob Davis Trophy, a prestigious honour in that region of Victoria. Moving to Melbourne he continued his cricket with South Waverley as Coach/Manager, following his beloved AFL team St.Kilda.

Appointing Eddie to a position at the then Victorian Soccer Federation (VSF) raised some eyebrows at the time, but I never had any doubt the benefits the organisation would gain from his appointment. What I did not expect was the sheer commitment we got from one individual and how he touched the hearts of so many people within the soccer community.

Writing and creating the Goalkick program in the mid 1990’s was the easy part; the challenge and difficulty was delivering it throughout Melbourne and regional Victoria – enter Mr Grace. I first met him at a carnival event for all sports in the country, conducting sessions for kids and encouraging them to join their local sports clubs. All the sports were there and next to me was this big, loud guy, who was getting on my nerves due to his big booming voice, his footy balls coming over into my area, mainly due to the fact he was getting more kids to his practice sessions than me. What was his secret?

I immediately witnessed first-hand his connection with kids and how he seemed to know their names instantly – it was only later I realised he just made up names and gave them to each child. The kids loved it, and him! Over a coffee break I asked him to visit the VSF for a chat and there began our association with Ed. 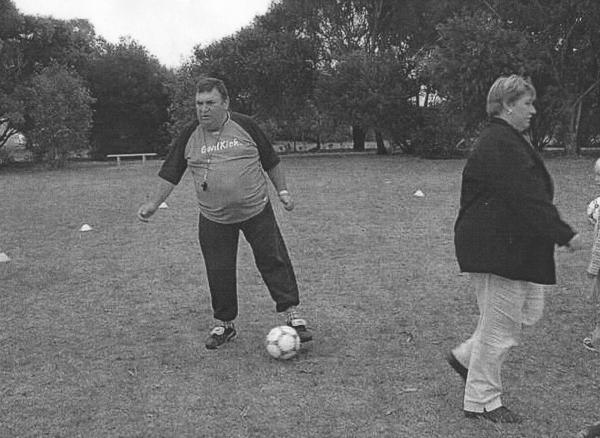 Over the next several years Eddie must have travelled the length and breadth of Victoria many times over, visiting clubs, regions and schools, preaching the gospel of Goalkick and signing up kids to take their first kick of a soccer ball. No matter what the weather, no matter how far away the destination, Eddie would pack up the van and be off in the early hours of the morning returning late at night, ready to do it all over again, all on a diet of soft drink and medication. His health was never great, but never once did I hear him complain or say he could not go. I do not have the figures at hand, but we are talking about tens and tens of thousands of kids from primary to secondary school experiencing football/soccer for the first time and falling in love with our game due to Ed and the success of the Goalkick program.

Eddie was not just involved in Goalkick. He organised thousands of kids to play at half time on the Melbourne Cricket Ground, Olympic Park and other venues around Melbourne during half-time intervals of major international games and local Victorian Premier League matches. If there was ever a coaching course happening over weekends, Ed was there, early in the morning with equipment for the instructors and providing support wherever it was required.

The success of our country camps staged at Creswick and Geelong, could not have happened without the support and effort Ed gave them. Holiday clinics held every school break relied on Ed supplying the equipment and then returning that equipment to storage long after instructors, kids and parents had gone home. I remember one such clinic at Springvale White Eagles, during winter, with the wind howling, the rain pouring and everyone looking at me to make a decision to call it off. Not a chance. Looking out of the window, there was Ed, outside, setting up grids and organising the balls into groups on the field, splashing through the mud with a big smile on his face and a booming voice telling us all to move our backsides and get outside. Nothing stopped this guy from making sure the kids had fun.

Ed was such a vital member of the VSF development staff and worth every penny we paid him. Don’t get me wrong, those who knew him, knew he was high-maintenance so he was far from perfect and often drove staff mad with his unique ‘administration system’ which relied on verbal communication and diagrams to support his learning difficulties. But, as I have often said, what he brought to the VSF in positives far outweighed any negatives and I have no doubts the growth of our game for well over a decade from the mid-1990’s the grassroots level was aided enormously by individuals like Eddie Grace.

There is so much more to say about Eddie Grace but I will let his colleagues offer more insight into this very special man.

“Eddie put his heart and soul into developing soccer at the grassroots level in Victoria for many years. The number of Goalkick participants, players and coaches he positively impacted was truly amazing. His enthusiasm and dedication to serving others, especially in junior sport, was a great gift that inspired many people”.

“Eddie Grace brought a smile to everyone with his infectious laugh and smile. During his time at the federation he delivered school soccer clinics along with the Goalkick program. Eddie won so many hearts, especially with the young children and he will always be remembered as the ‘Big Kid’ with the BIG HEART! R.I.P. big fellow.”

“Eddie was not just an ordinary man but an extraordinary person who was highly regarded in his role and skill set with young people and as the Goalkick Coordinator for us in the country.”

Eddie shared a unique friendship with Wendy Smith lasting well over 20 years and they both started doing markets after his retirement from the VSF, selling various products, including children’s toys, around the Mornington Peninsula. They became regulars at many venues.

Ed’s love for kids of all ages never changed over the years and he was at his happiest when interacting with them. After a while he was known as Ed the Toy Man. If anyone needed donations for raffles, Ed would always be the first to put his hand up to help and source them. However, he was never forgotten by the soccer kids and Wendy said that often, during market days, kids would waltz up to Ed and ask him if he was Eddie Grace and would add, “You taught me Goalkick”, which always made him feel really proud.

Throughout his life, Ed sought out groups and organisations to help. He volunteered his services to many causes including Peninsula Health Services, Brotherhood Community Health Care (Southern Division), Disability Opportunities Victoria and Boneo Day Lions Club to name but a few, helping so many and raising thousands of dollars to much needed charities. 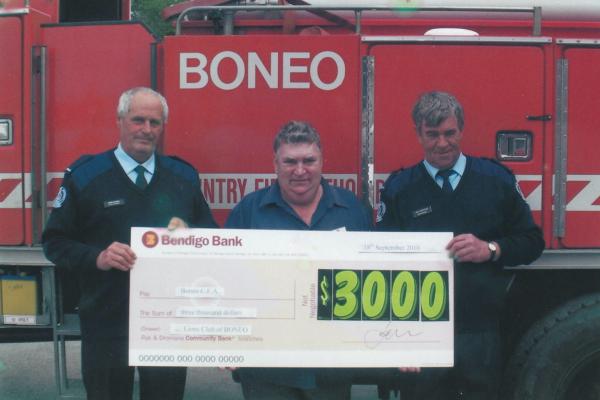 Wendy says of Ed, “There are so many wonderful and great things Ed has done, not only for myself, but many other people over the years I have known him. Sadly, over the last few weeks his health quickly deteriorated, and he passed away peacefully on 23rd October 2020. As Ed wished, I will be taking his ashes back to Deniliquin to be scattered with family and many friends present. Thank you for your friendship, you helped so many people, never asking for help yourself or recognition. It was a privilege to be a part of that and the fun we shared. Farewell dear friend and run free”.

Ed was a humble man, who gave so much to so many and brought smiles to so many children’s faces across all sports. I only hope he knew in life how much people thought of him and how much pleasure and fun he brought to our young generation of Goalkick kids.

R.I.P, big fella and thanks for touching our hearts.