If one needed a further reminder, the 2021 NPLW Victoria season is providing yet another example of football being played on a pitch - not paper.

Coming into the 2021 season off a year-long break, the common consensus was that defending Community Shield, Nike FC Cup, Premiers, and Champions Calder United loomed as the team to beat, with vanquished Grand Finalists FC Bulleen Lions looming as the most likely contenders. 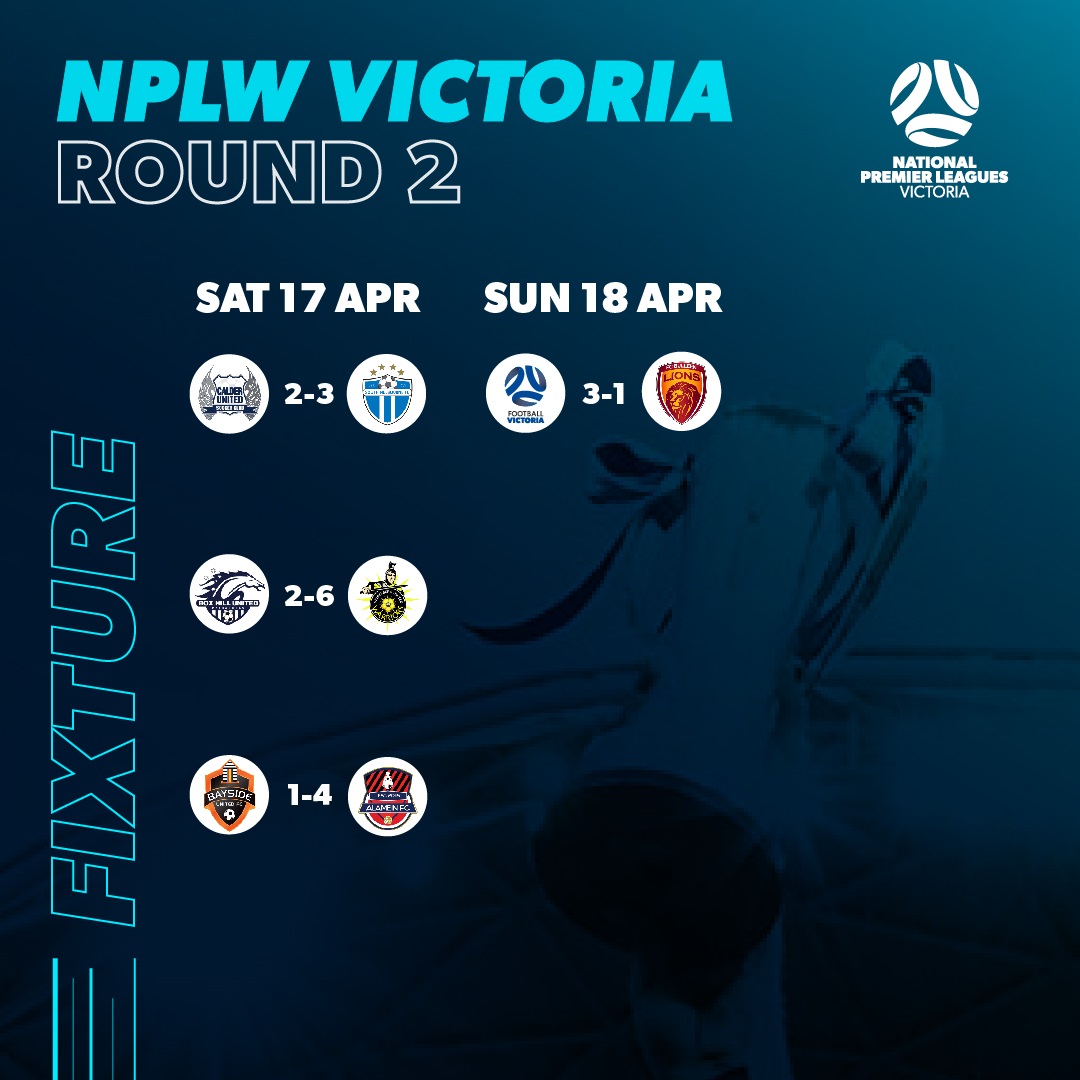 The rest of the pack, led by South Melbourne and Alamein FC, were expected to trail behind, taking points off each other and seeking to build towards peaking in the right place and the right time in pursuit of silverware.

But two weeks into the NPLW Victoria season, it’s Hellas, not Calder, that sits atop the state’s top-flight and the exciting young talents at FV Emerging lurking behind them only on goal difference.

The side Emerging beat in round one, Heidelberg United, occupies third position on the table before Calder sneaks into the final playoff position of fourth. Behind them, Alamein and Box Hill United are kept at bay by just goal difference, while Bulleen sits in the unfamiliar position of joining Bayside United as the only pointless sides of 2021.

It had taken just 15 seconds for South to take the lead against Bulleen the previous week on their way to a 7-1 win and while hosts Calder was able to hold out a bit longer, they still suffered the wrath of Lucy Johnson very early in Saturday afternoon’s contest at Keilor Park Recreation Reserve.

Picked out by Sophie Papatsanis in a yard of space outside the Calder penalty area, the Tasmanian star let loose with a first-time, left-footed effort that gave goalkeeper Alyssa Dall'Oste absolutely no chance as it sailed into the top corner to make it 1-1.

Nonetheless, Hellas struck quickly in the second stanza and had their lead back in the 48th minute when Natalie Martineau - making her return after winning a W-League title with Melbourne Victory - headed home an Akeisha Sandhu cross… and promptly went face-first into the far post as her momentum continued.

Crosses in from the right flank appeared to be a concerted tactic from South early on in the second 45 and the stratagem delivered once again in the 51st minute when Janna Lawson sent in a ball that Johnson fired home for her second of the game.

Withers - who probably could have four or five on another day - would answer back with her second of the game in the 78th minute but it wouldn’t be enough for the hosts as they fell to a 3-2 defeat.

South will seek to continue their strong start to the season against FV Emerging next week, who themselves continued their red-hot start to 2021, and extended Bulleen’s ice-cold one, by downing the Lionesses 3-1 at the Knox Football Centre on Sunday afternoon.

Belying what was to come, Emily Dolzan put the visitors ahead early on in the contest when she seized upon an Olivia Edwards cross that had bounced through to her at the back post and nodded home.

But the Lioness lead only lasted until the 56th minute; erased by Alana Murphy when she did well to control a Holly Furphy cross from the right and beat goalkeeper Tarla Dwyer low to her left.

The game remaining at equilibrium as it entered its final ten minutes of regulation, it appeared as though the affair was headed for a draw until Isabella Sewards produced an outstanding run into the box and equally outstanding finish across the face of goal to make it 2-1.

It was, apparently, the youngster’s first goal at any level.

The win was then sealed just moments later when Jessica Young grabbed her second goal in as many games after she seized upon a Caitlin Karic cross that Dwyer had parried back into play and poked home.

FV Emerging, who under their NTC banner conceded 116 goals and finished second bottom of the table, now find themselves trailing just South early on in the campaign, with a three-point gap between themselves and third-placed Heidelberg.

Things didn’t start well for the Bergers in their round two match: coach Jonathan Clemente’s team going down after 21 minutes when an attempt by Ellen Turner to head clear an incoming shot careened directly into the face of Elly Torre and back into the back of the net.

It was then 2-0 in the 39th minute when Georgia Kandilas seized upon a ball in behind the Alexander defence, rounded the keeper and fired into an open goal.

But displaying character to fight back, the visitors rallied to make it 2-2 with 20 minutes to go: Keely Lockhart and Brydie Siryj netting in the 57th and 69th minutes respectively.

And from there it became the Danielle Wise show.

The former NPLW NSW player of the year punished Pythagoras with four goals in the space of 13 minutes as her side ran riot, secured their first win of the campaign and vaulting into third on the table.

Like the Bergers, Alamein bounced back from their round one defeat to secure their first points of the season in round two: downing Bayside United 4-1 at Kingston Heath Soccer Complex on Saturday afternoon.

Backing up a strong performance in a losing effort against Calder the previous week, Elaina Vatcky put Alamein up 1-0 in the 20th minute, before Jennifer Lum doubled the visitor’s advantage as the first half continued.

Rachel Stirton, herself an admirable performer in Bayside’s loss to Box Hill the previous week, halved the deficit with a magnificently taken left-footed volley in the 50th minute of the contest but alas for coach Terry Tynan’s side it didn’t spark a fightback.

A bustling run and shot from Emma Runnels in the 66th drove a dagger into those hopes, before Emily Harbis’s 91st-minute header twisted the knife. 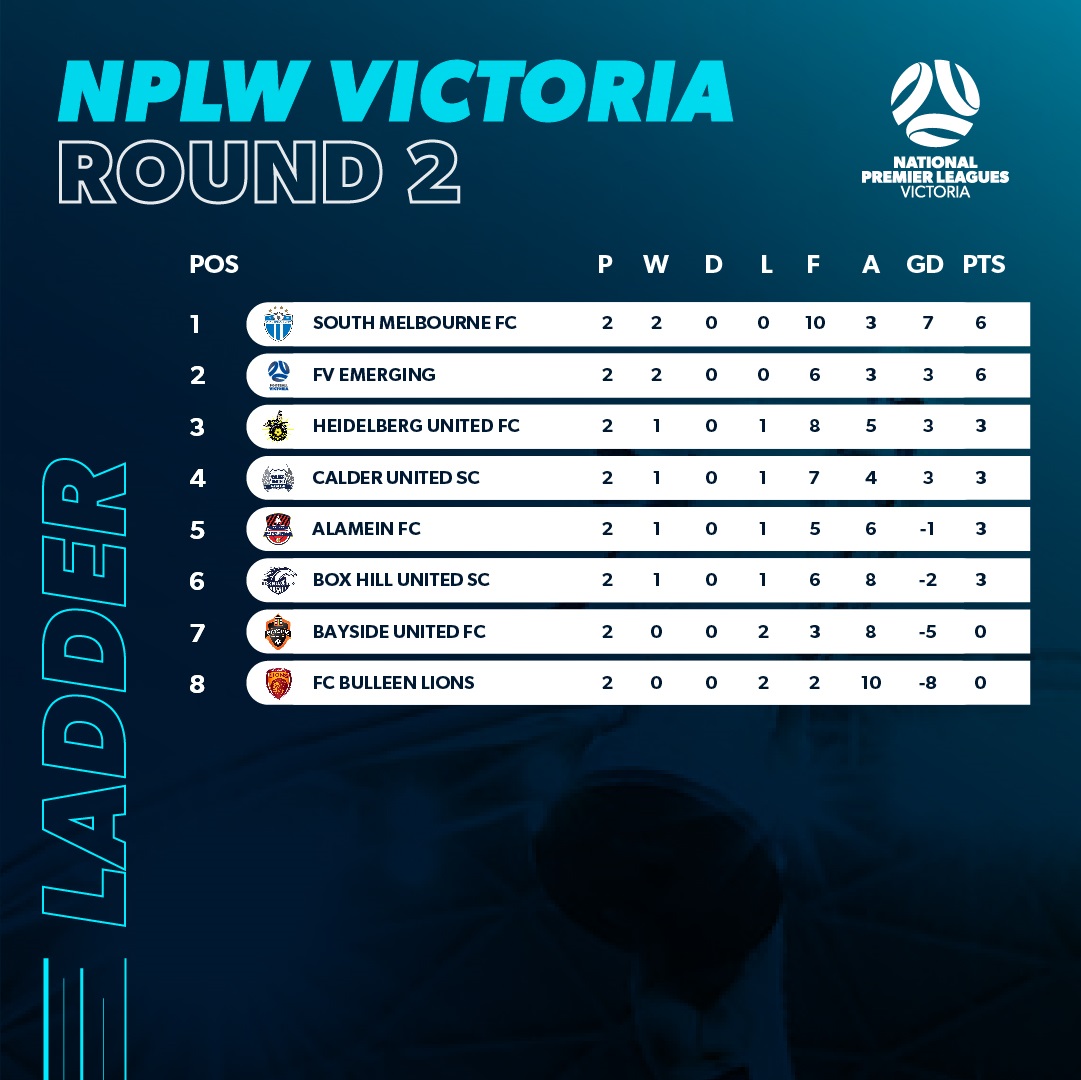