After being forced to hit the pause button as Victoria battened down the hatches to snuff out the latest emergence of COVID-19 in the community, the state’s top-flights returned to action this past weekend with normal service, mostly, resuming. And that meant lots of goals and dramatic finishes.

In line with Victorian Government regulations surrounding the return of community sport, the NPL’s return was, unfortunately, staged without fans in the stands. And perhaps this lack of partisan, vocal support came back to bite South Melbourne -- the only side in the top six to fall to defeat over the weekend. 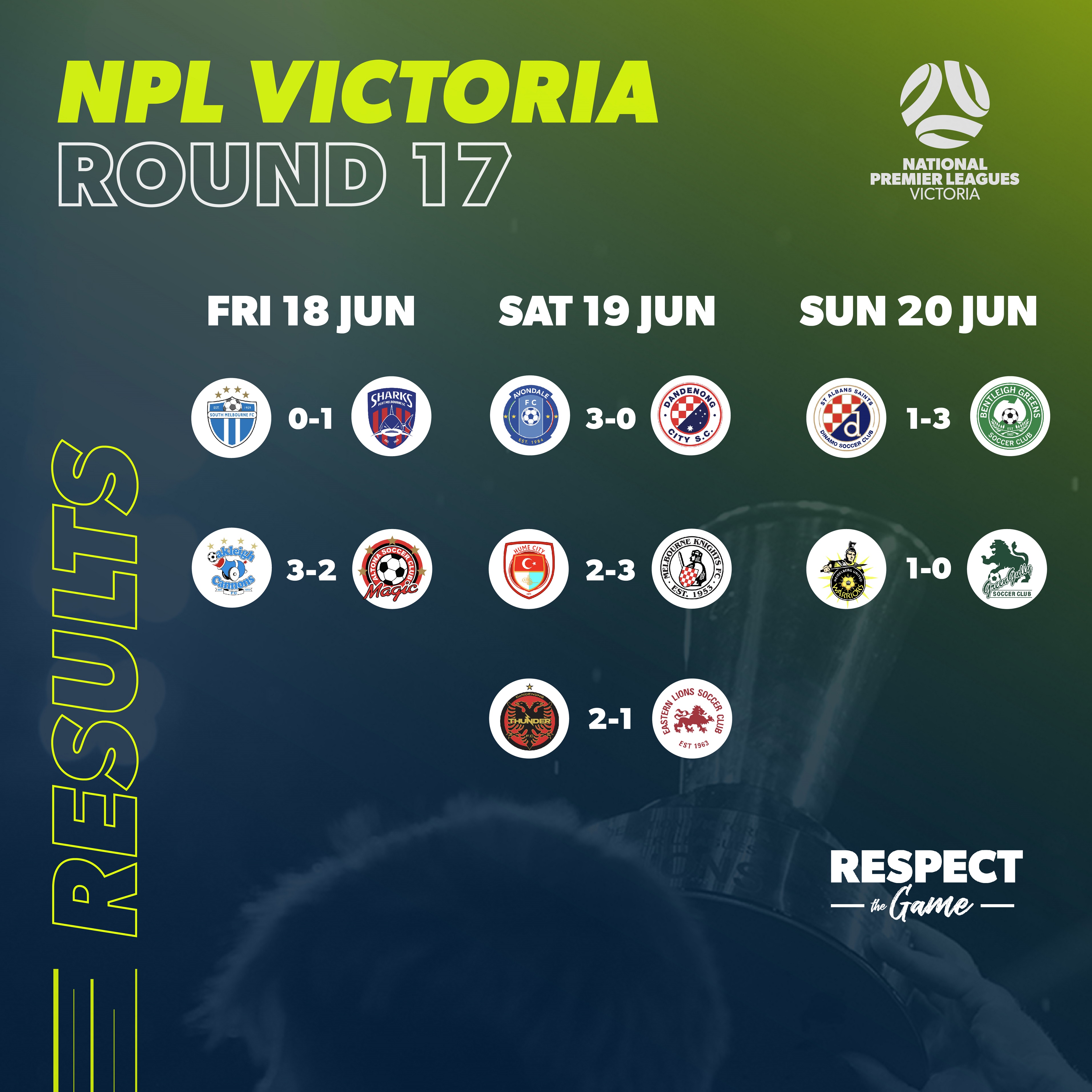 Desperately seeking to stay in touch with those at the league’s summit after falling from their themselves in recent weeks, Hellas should have taken the lead in the eighth minute when Henry Hore sprung Daniel Clarke into acres of space behind the Sharks’ lines with a perfectly dinked through ball.

With an eternity of time to pick out his target as he advanced on the goals of Andrew Withers, Clarke appeared seemingly nailed on to score... only to put his eventual effort to the wrong side of the right-hand post and gift the visitors a reprieve.

South was then almost made to pay for that gift nine minutes later when Chris Duggan, after riding a challenge from Clarke, let loose with a long-range effort that initially appeared to be dipping into the South net only to then hit the bar and rebound back into play.

Duggan, though, wasn’t done and eventually gave his side the lead in spectacular fashion when he positioned himself under Bradley Norton’s attempt to head a cross clear and let fly with a majestic bicycle kick that thundered into the back of the net.

It was a goal worthy of winning any game of football and on Friday, it did: Port holding on to record a 1-0 win over South -- who are now winless in their last four -- and move just a point back of their local rivals in the seventh position on the table.

In Friday night’s other contest, Oakleigh Cannons leapfrogged over South into the fourth position on the table after recording a dramatic, last gasp victory over battlers Altona Magic.

Firing home a corner that spilled out to him at the back of the penalty area, Matt Thurtell put the Cannons ahead in on the half-hour mark at Jack Edwards Reserve, only for Nicholas Sette to tie things up for the Magic minutes later when he twisted and turned himself into the Cannon box and sent in a shot that took a healthy deflection and looped into the back of the net.

A Jon Mcshane header in the 39th then almost had the Magic ahead, only for it flash just across the face of goal.

In similar fashion to his first goal, Thurtell met a corner unmarked at the back post to tap in and make it 2-1 for coach Chris Taylor’s side, only for McShane to answer back up the other end ten minutes later when he got in behind the host’s lines and fired inside Nick Feely’s near post.

The game ticking into injury time with scores locked at 2-2, it appeared that still winless Altona was about to record their eighth draw of the 2021 campaign, only for Joe Knowles collected a loose ball in space and, with his half yard of time, curled a sweetly taken shot into the top corner of the net to win the game for Oakleigh.

Keeping pace with the Cannons on 24 points was Melbourne Knights, who netted a dramatic late winner of their own to down Hume City 3-2 on Saturday afternoon.

Streaking out to a 2-0 first-half lead thanks to a fifth-minute strike from Gian Albano, his sixth goal of the season, and a tidy one-on-one finish from Oliver Zafiridis on the half an hour mark, Knights looked to be sitting pretty at ABD Stadium as they looked to snap a two-game losing run. 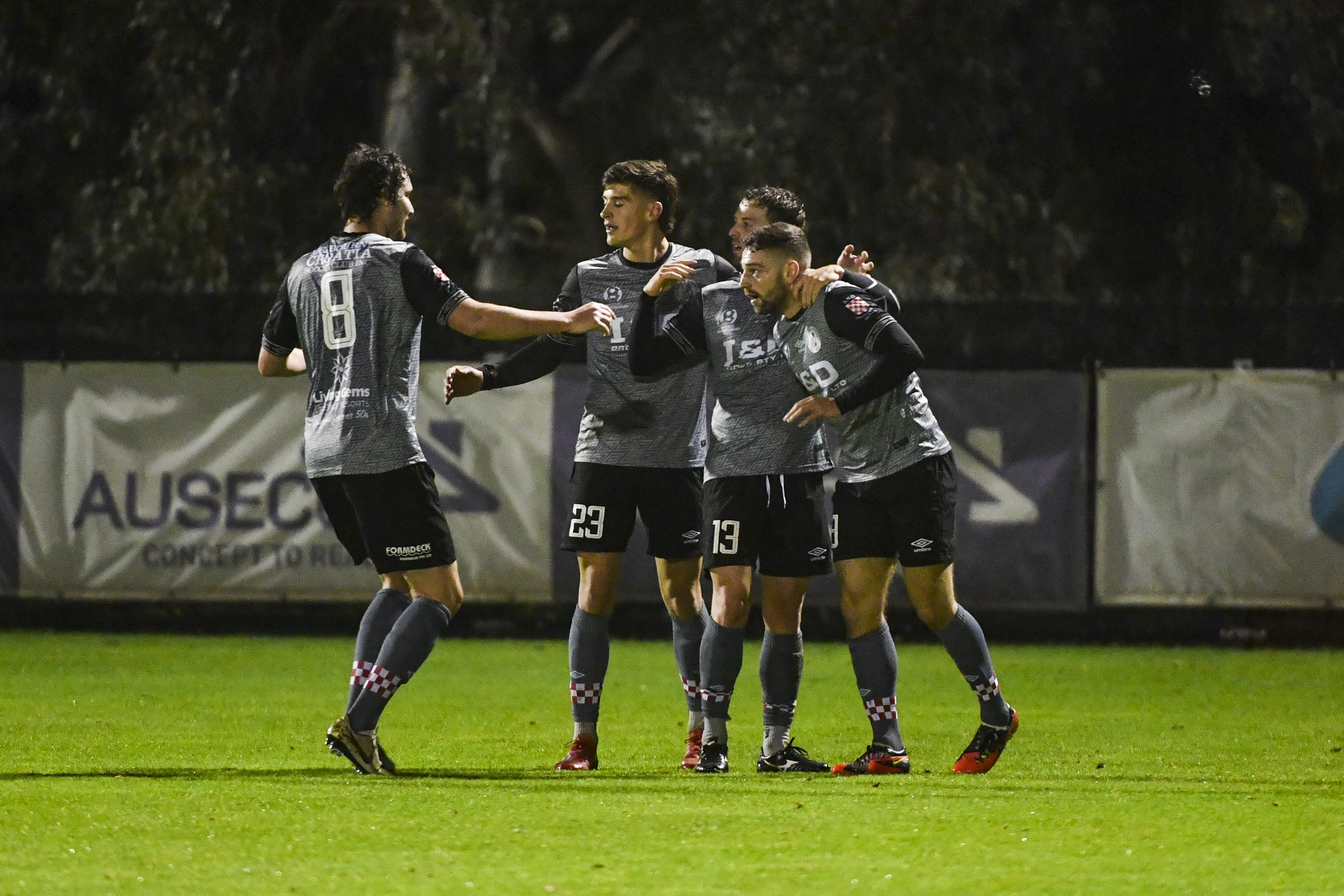 But Josh Bingham’s close-range header from a Danny Dixon cross in the 58th minute served to cut the deficit in half, and when he returned the favour by assisting Dixon five minutes later it was gone completely.

The wind at their backs, Hume easily could have had a third moments later when Dixon got to the byline and whipped in a cross that just beat the outstretched boot of Andy Brennan.

But with second-half Hume substitute John Mcguigan shown his second yellow card and receiving his marching orders, Croatia was able to apply some late, late pressure of their own and were quickly rewarded; Alun Webb driving into his foes’ penalty area and whipped in a ball that defender Pat Langlois, disastrously, turned into his own net.

Doing their bit to ensure they didn’t slide down the table like their rivals Hellas, Heidelberg United ran out 1-0 winners over top-six aspirants Green Gully at Olympic Village on Sunday afternoon; coach George Katsakis’ side snapping a run of three games without a win with the triumph.

Knowing that a loss would have seen them drop down to sixth, Alexander had the best of the chances in the first half but were unable to find the back of the net: Adrian Zahra, Jackson Lino and Dusan Bosnjak all going close.

But eventually, the Berger breakthrough arrived when Lino, after chasing down a wayward first touch on the left flank, slid a pass into the path of an advancing Eoin Ashton inside the Gully penalty area for the former West Brom youth prospect to hammer home.

Bentliegh Greens likewise ensured that they kept up with the top of the table race on Sunday afternoon by downing St Albans Saints 3-1 out at Churchill Reserve but, stop me if you’ve heard this one before, they required some late magic to do so.

Seeking to remain unbeaten in their last eight league games, the Greens got off to a blistering start to the contest when Damien Iaconis sliced a pass through Dinamo’s defensive line and into the path of Braedyn Crowley.

Crowley should have had a brace on the half an hour mark, but could only direct his one-on-one shot directly at Hayden Browne.

And with a chance to move six points clear of the relegation places on the line, the hosts were then able to bring things back level with just over 15 minutes to go when, after a goalline scramble, Jason Hart fired the ball beyond Javi Lopez in the Greens’ goal.

Yet, heartbreakingly for the St Albans’ faithful, a looping ball over the top from Jacob Alexander in the 92nd minute fell perfectly for substitute Chudiar Tharjiath to fire a venomous effort beyond Browne.

All doubt was then removed five minutes when Tharjiath turned provider: cutting a ball back for Thierry Iradukunda, making his Greens’ debut, to fire into the net.

The Greens and Bergers, however, continue to sit in the shadow of Avondale FC at the Victorian top flight’s summit; the Avengers accelerating away from a nine-man Dandenong City to remain two points clear on Saturday afternoon.

First-choice keeper Jasmin Keranovic seeing red just 18 minutes into the match, Hajduk was forced to turn to young back-up keeper Liam Kennedy early on and, after being tested several times by the hosts, he was beaten in the 42nd minute when Brandon Lundy chipped a superb free kick over his head from an acute angle.

Losing captain Steven Topalovic to a second yellow card just over 20 minutes into the second half, Dandy City then found themselves down 2-0 in the 74th minute when a sustained period of Avenger pressure eventually allowed Joey Katabian to fire home his first goal of the season.

Liam Boland then completed the regulation win for his side: receiving a pass from Dillon Jakupi, rounding a defender and sliding a close range shot beyond Kennedy.

Continuing to slowly creep up on the top six, Dandenong Thunder got off to a quick start against Eastern Lions in the round’s final fixture: Tomas Maricic rising above a pack of players assembled in the Lions’ six-yard-box and heading beyond keeper Keegan Coulter.

The Lions did pepper the goals of Francis Soale as they looked to muster a comeback, only to find themselves behind 2-0 at the break when, after already having one Thunder goal disallowed, Jamal Ali bent an outside of the boot right-footed effort beyond Coulter.

Picked out by James Doyle on the far side of the Thunder penalty area in the 92nd minute, Denis Daluri cut inside and sent in a shot that Soale couldn’t keep out despite getting a hand to it but, in the end, it wasn’t enought to spark a heartsopping ending as the hosts ran out victorious. 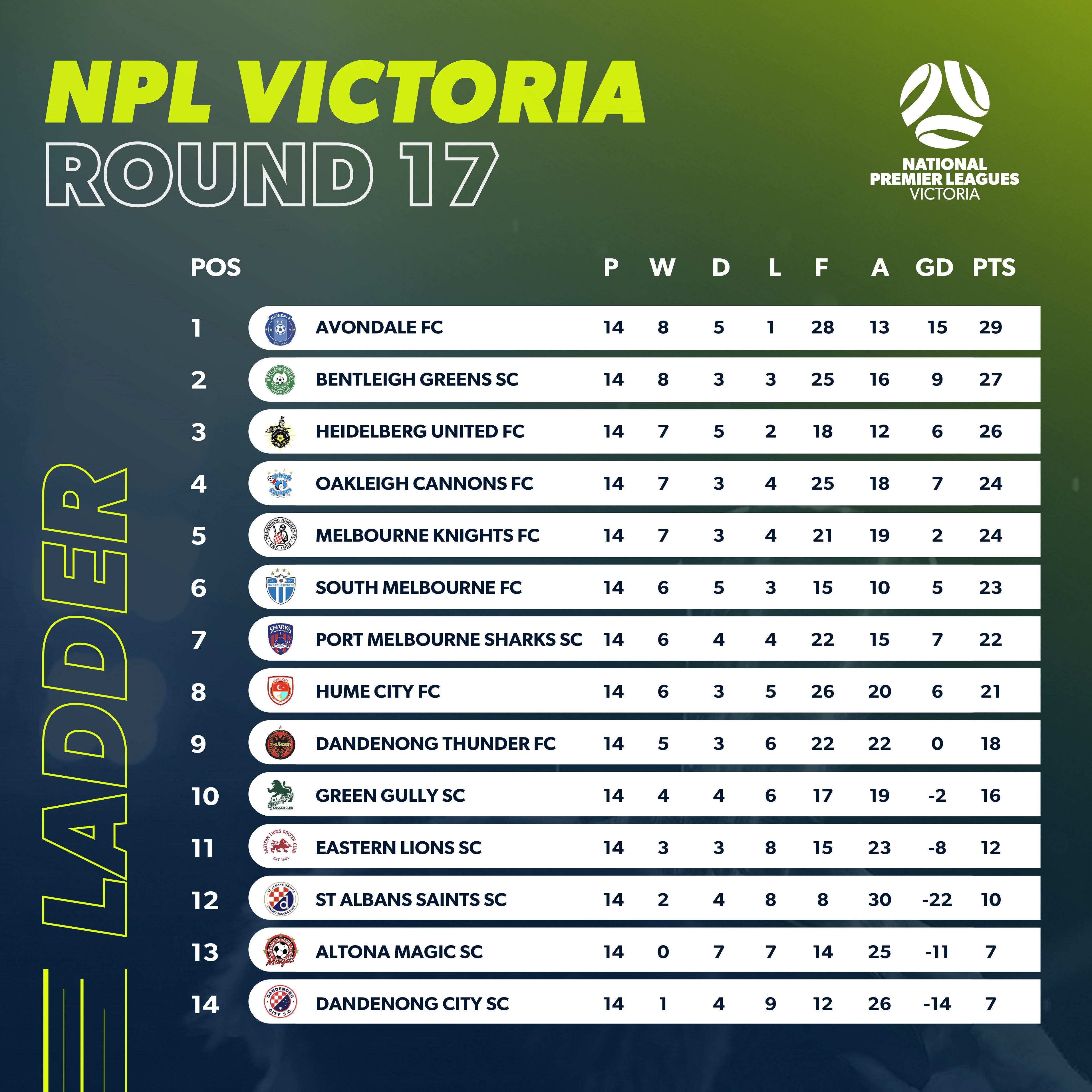