And then there were none. With five rounds of the 2021 NPLW Victoria season now in the books, FV Emerging’s loss to Alamein FC this weekend means that no side across the league remains undefeated. Conversely, with just five points separating first from sixth, the competition is shaping as one of its tightest in years.

Meeting a corner looped in towards the back post, Annabel Haffenden put visiting Alamein ahead in the 24th minute of their meeting with the surprise league leaders, before Katrina Nikpour made it 2-0 ten minutes later after pouncing on a ball that bounced off the post and back into play after Emerging keeper Kayla Sidzimovska spilled a Haffenden cross.

Particularly cruel for the hosts, that second goal came hot off the heels of early-season standout Caitlin Karic making a break in behind the Alamein lines and going one-on-one with keeper Beth Mason-Jones for a chance that, alas for the youngster, was then put over the bar.

Making the hosts rue their missed chances, a sumptuous lofted shot from Elaina Vatcky a minute past the hour mark made it 3-0 for coach Kat Smith’s side - sealing them the three points and keeping them within a win of the playoff places.

Emerging, however, retained top spot on the table come despite the defeat after Calder United went down 3-0 to FC Bulleen Lions at the Veneto Club; the Lionesses able to fashion some form of retribution for losses in the 2019 NPLW Victoria Grand Final and the 2020 Community Shield.

Though neither side was able to break the deadlock across the game’s opening 45 minutes it was Bulleen that created the better chances: captain and W-League champion Kalya Morrison going closest when she snuck out to the back of a pack awaiting a corner and drove an effort at Calder keeper Alyssa Dall'Oste.

A testament to the work of the host’s back four and the tactical setup of coach Caitlin Friend, Bullen’s Argentine international goalkeeper Gaby Garton only ended up making two saves over the course of the 90 minutes - her defence getting enough pressure on Calder’s other attempts on goal to force them wide.

Up the other end, Bulleen finally made their breakthrough in the 64th minute of the contest when flyer Lia Privitelli broke through the Calder lines, carried the ball inside the penalty area and let loose with a wicked effort that thundered beyond Dall'Oste and into the top corner.

Tiffany Eliadis made it 2-0 five minutes later when she rose to direct a high ball into the penalty area into the bottom corner of the net before she then put the game to bed in the 84th minute when she bundled a shot over the line from close-range.

Securing their third win of the season, Bulleen moved level on points with Calder as a result of the triumph, while the visitors slipped to third place on the table thanks to South Melbourne’s 3-1 triumph over Box Hill on Saturday afternoon.

Lucy Johnson denied the chance to add to her early-season tally on multiple occasions early on at Lakeside Stadium, Hellas eventually made their breakthrough in the 13th minute when Janna Lawson headed a cross from Aimee Medwin back into the visitors six-yard-box, with Sofia Sakalis then diving across to nod it home.

Turning on the jets, winger Kat Goff then burst into space and made her way to the byline in the 24th minute to create the host’s second when she picked out Lawson at the back post for a simple close-range finish.

Dancing around multiple defenders near the goal line in the 51st minute, Lawson then played an integral role in her side’s third goal by squaring up a pass at the top of the penalty area for new South signing Reona Omiya. The Japanese midfielder, having moved over from Bulleen mid-week, promptly fired in an effort on goal that bounced off the post and back to Sakalis to fire home past keeper Emily Hudson.

Despite the three goals conceded, the work of Hudson and Box Hill defender Oliva Ellis were key in ensuring the margin didn’t blow out to a greater margin, and their side was able to peg one back on the hour mark when Anais Josefski seized on a loose ball in the midfield, drove forward and placed a shot beyond Melissa Barbieri and into the bottom corner.

Thanks to Calder’s defeat, Hellas moved up to second place on the NPLW Victoria table with the win, whereas Box Hill remain in seventh place on the eight-team table above Bayside United - who are still searching for their first win on the campaign after going down 5-1 to Heidelberg United on Saturday afternoon.

Once again, the Bergers were driven to their points by standout attacker Danielle Wise, who moved two goals clear in the NPLW Victoria Golden Boot race in firing home a hattrick at Olympic Village.

Striking in the 16th and 26th minutes to give her side an early two-goal buffer, Wise secured her hattrick with a well-taken shot in the 87th minute to make it five for coach Johno Clemente’s side.

Sandwiched betwixt those strikes, Sidney Allen directed a well-placed header beyond Bayside keeper Lauren Farrugia in the 51st minute to make it 3-0 with Bonnie Davies then turning in an Allen cutback nine minutes later to make it 4-0.

Bursting through the Bergers’ lines in the 85th minute of play, Rachel Stirton secured a late consolation goal for his side with a calmly placed shot beyond Melissa Maizels. 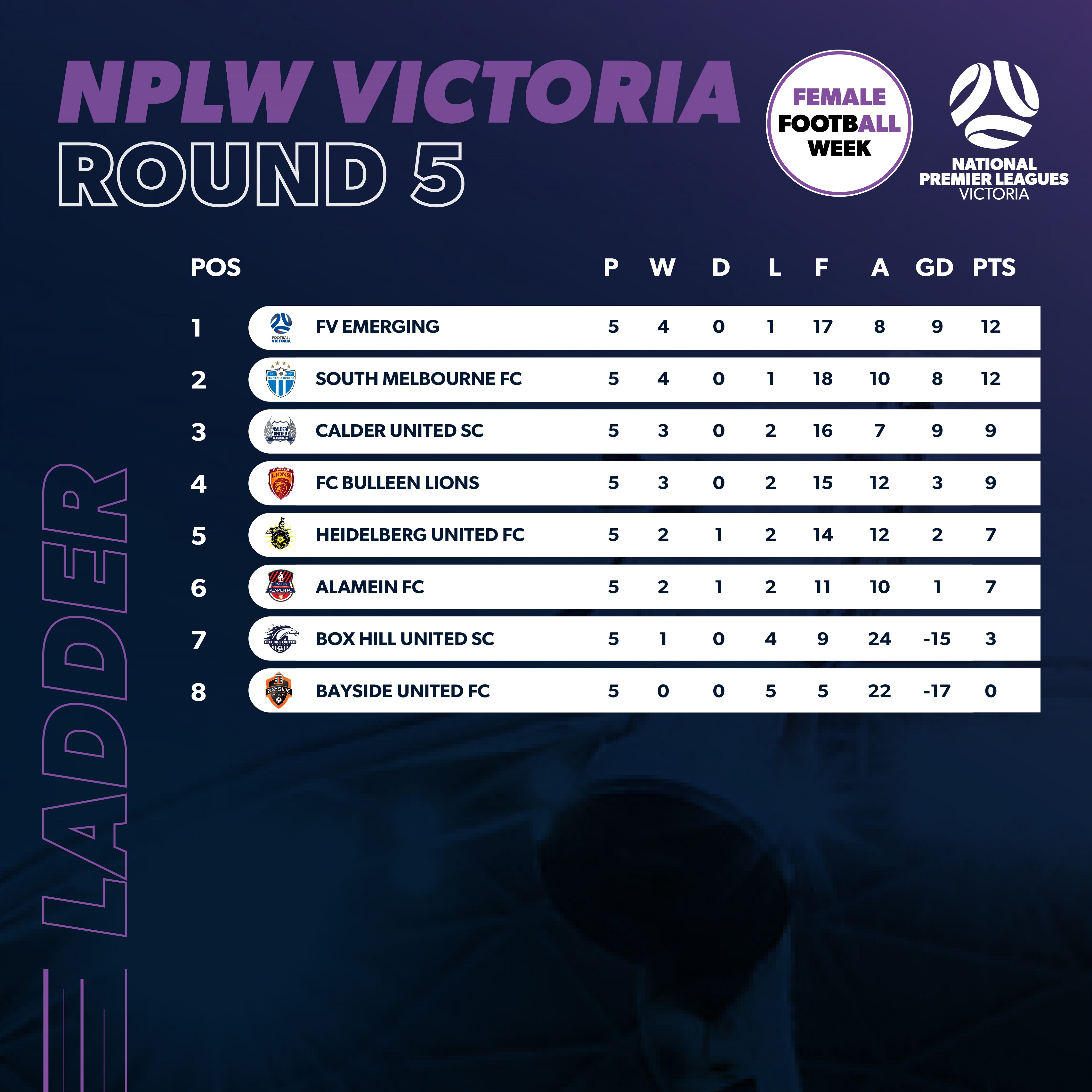