Clear separation has emerged in NPLW Victoria -- the top four all vanquishing bottom four opponents yet again over the weekend -- but the battle for positioning between those within those two cohorts remains fierce at the conclusion of round 14.

Having taken points from a game for just the second time this season after drawing 1-1 with Alamein FC the previous week, Box Hill United made the journey out to Melbourne’s Northwest on a freezing Friday night looking to keep the momentum going against Calder United.

The defending NPLW Victoria champions, however, were in no mood to fall prey to any nascent Pythagoras momentum and, after peppering the goal of keeper Erin Hudson early on, took the lead in the 23rd minute when they forced a turnover deep in their foes half and worked the ball to Harriet Withers in a position where she could fire in from range. 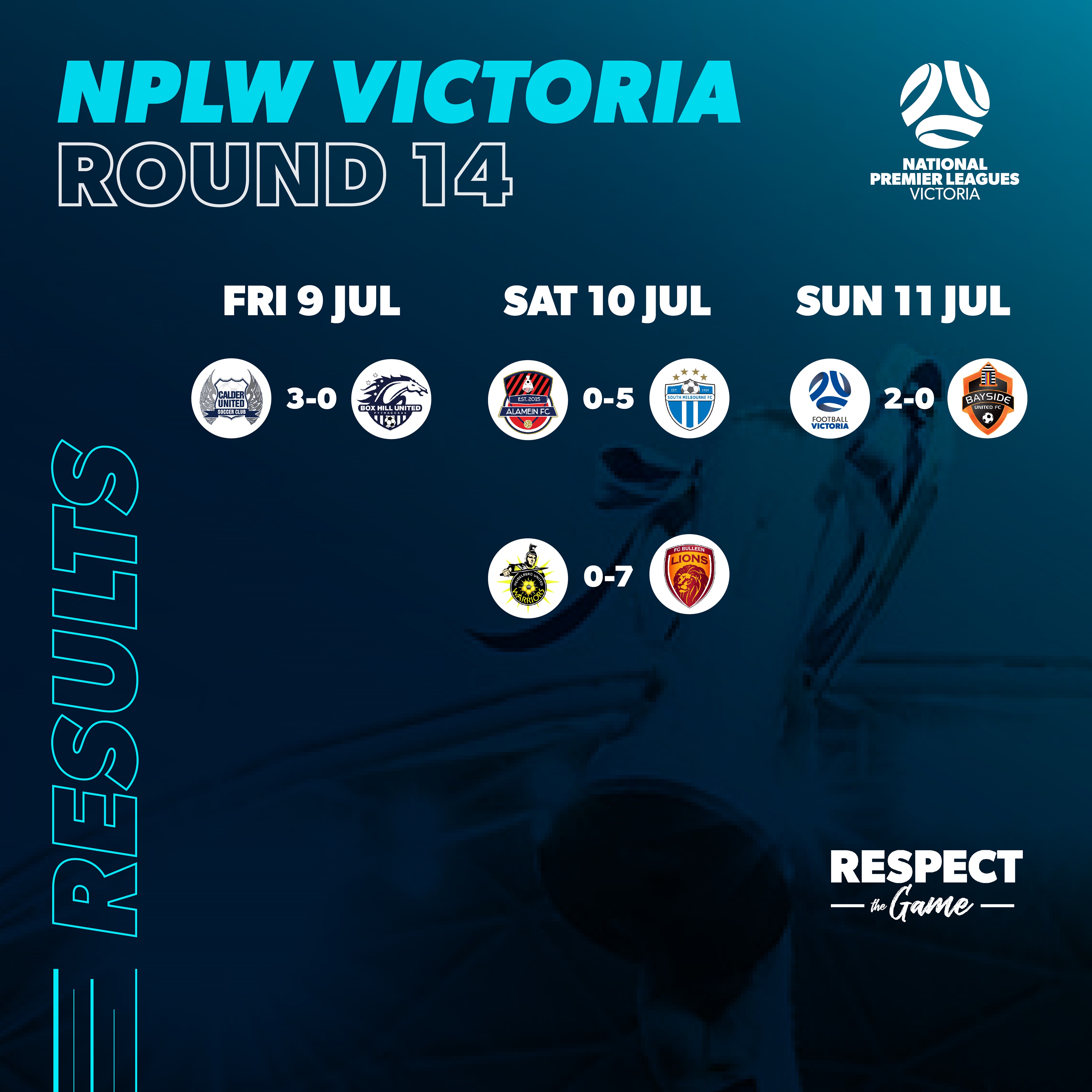 Following a short corner routine -- which Calder had many, many opportunities to bust out during the game -- the hosts were able to make it 2-0 in the 31st when the ball made its way to Julia Sardo and she fired in a long-range effort from a tight angle that found its way through a mass of assembled bodies and into Hudson’s goal.

Yet, although Box Hill struggled significantly to consistently win the midfield battle and get the ball forward, praise must be given to the defensive efforts of centre-back pairing Olivia Ellis and Belinda Stojcevski as well as Hudson -- their frequent crucial interventions ensuring that their eventual loss didn’t turn into a blowout one.

Coach Marc Torcaso’s side did eventually find their third, however, when a free-kick from Adriana Taranto was met by an unmarked Natasha Dakic inside the penalty area and bundled over the line to secure the defender’s first goal of the season and her side’s triumvirate.

Box Hill will now turn their attention to their Wednesday evening meeting with Melbourne Knights in the Nike FC Cup and next week’s meeting with Bayside United -- a contest both sides will have circled in their diaries as a strong opportunity to pick up three points.

Bayside, for their part, went down 2-0 to FV Emerging on Sunday afternoon; coach Helen Winterburn’s side picking up an important triumph after two winless weeks.

Breaking through 15 minutes into the contest, Francesca Iermano had a golden opportunity to open the scoring for Emerging when she charged through one-on-one with Bayside keeper Lauren Farrugia, only to slice her effort across the face of goal and beyond the left goalpost.

Bayside had a chance of their own to open the scoring five minutes later when Amanda Stevenson got to the byline and looped a cross in to Kirstie Shearing for a free header just meters out from goal, only for the Bayside number seven to send her header over the top of the open goal.

But breaking quickly after just staving off disaster from a tepidly hit back pass, Emerging took the lead in the 28th minute when Holly Furphy found a yard of space in the top corner of the Bayside area and drilled a shot inside Farrugia’s near post.

Shrugging off Emerging defenders, Shearing played Stevenson through in on goal in the 50th minute, but the attacker’s resulting well-hit shot bounced teasingly off the crossbar and back into play.

Yet Emerging survived and made it 2-0 three minutes remaining in the contest when Candice Kilderry forced a turnover deep in Bayside’s half and worked the ball to Alana Murphy inside the area, with the attacker promptly dragged down Grace Norbury.

Leia Varley then converted the resulting spot-kick to make it two and secure the three points for her side and send them nine points clear of fifth-placed Heidelberg United.

Unfortunately for the Bergers, they suffered a 7-0 loss for the second-straight week on Saturday afternoon: put to the sword by FC Bulleen Lions at Olympic Village.

After Tyla-Jay Vlajnic forced a turnover off an Alexander turnover in the fourth minute, the Serbian international cut inside and worked the ball to Alana Jancevski, who promptly put the ball into the top corner to make it 1-0 and give the Lions a dream start.

Picked out by Paige Zois in a pocket of space, Tessa Sernio let fly with a peach of a long-range effort to make it 2-0 for the visitors in the 20th minute and Tiffany Eliadis let fly with a distanced drive of her own two minutes later to make it three.

Breaking in on goal in the 40th minute, Heidelberg’s Keely Lockhart had a small window to restore some semblance of hope, only for it to be extinguished by the Terminator-like recovery of Vlanjic as she got back and slid in to deny the shot.

Dragged down by keeper Natasha Stathopoulos, Racheal Quigley won a penalty dispatched by Jancevski minutes into the second half to make it four, before the Perth Glory bound youngster grabbed her hattrick in the 52nd minute after Vlanjic combined with Sernio to switch the play from left to right.

Dinking a cheeky outside of the boot ball across the face of goal, Jancevski then turned provider as Quigley headed home in the 62nd minute.

The Bulleen number ten then launched an audacious chip over the head of Stathopoulos from the edge of the area in the 90th minute to make it 7-0, complete the route and perfectly set up a tantalising first against second meeting between themselves and South Melbourne at Lakeside Stadium on Saturday.

South, for their part, did what they had to do in their Saturday afternoon contest with Alamein FC: riding yet another Melina Ayres haul to a comfortable 5-0 win.

Heading in a corner in the eleventh minute of play to open the scoring, the fringe Matilda secured her brace just over ten minutes later when Alamain keeper Bethany Mason-Jones inadvertently sent her clearing punch directly into her breadbasket and set up a simple two-touch finish.

Diving on a loose ball following a Caitlin Pickett cross, Lucy Johnson made it 3-0 for Hellas in the 37th minute of the game and while the Tasmanian may have seen her attempt at a brace crash off the crossbar in the 47th minute, Janna Lawson stuck true in the 84th to make it four against her former side.

Stalwart Southie Natalie Martineau then completed her side’s comprehensive win when she got on the end of a Lawson cross minutes later -- scoring her side’s astounding 49th goal of the season in just eleven games and setting them up nicely for their mid-week meeting with Casey Comets in the Nike FC Cup. 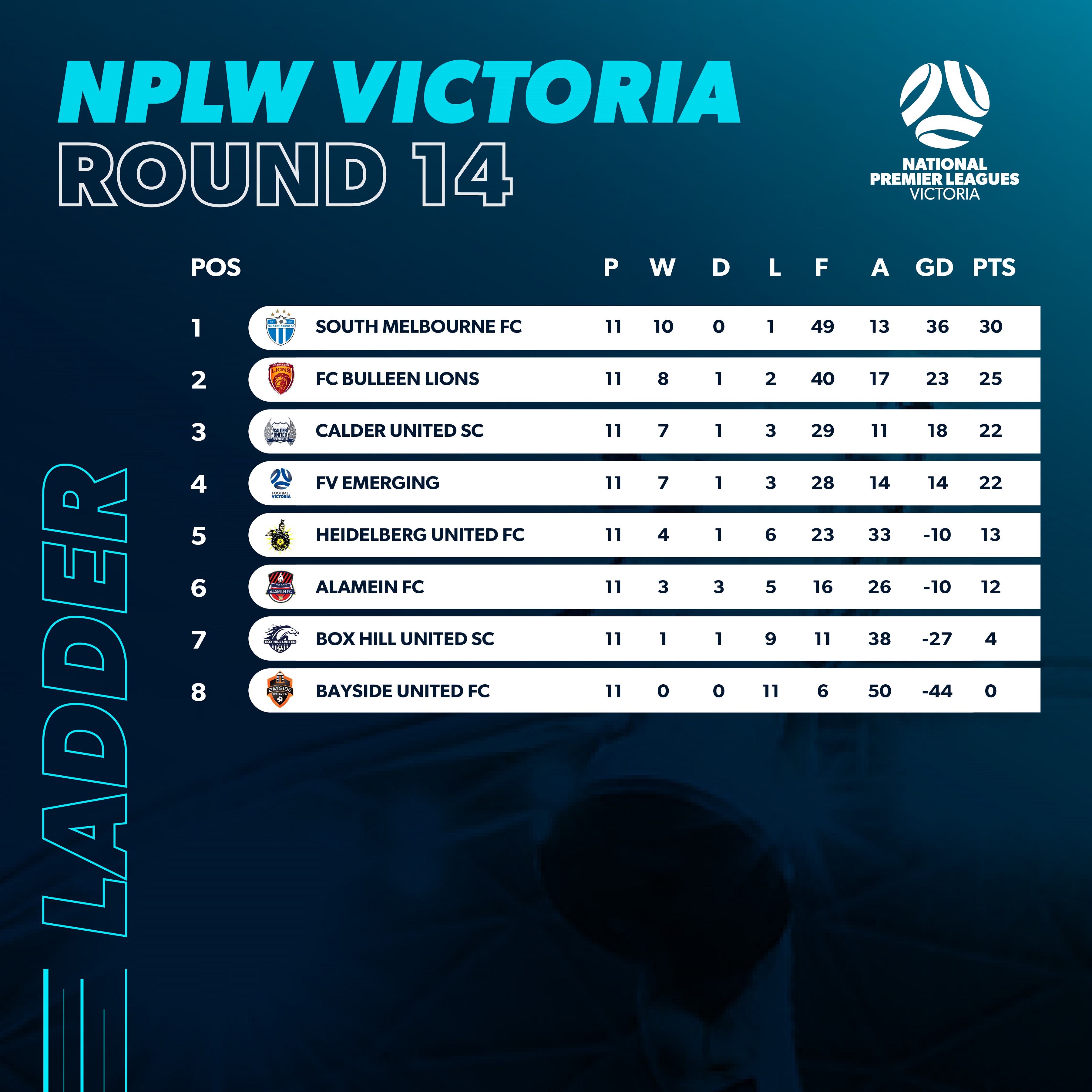