After being forced to follow along from home the week prior, fans were back on the fences and in the stands at community grounds across Melbourne this week, and those that made their way out to NPLW Victoria’s four matches were treated to a smorgasbord of action.

The match of the round, both in relation to its stakes and quality that ensued following its kickoff, took place in Melbourne’s northwest: FC Bulleen Lions storming back from a 3-0 first-half deficit to earn a 3-3 draw with Calder United in a 2019 NPLW Victoria Grand Final rematch at Keilor Park Recreation Reserve. 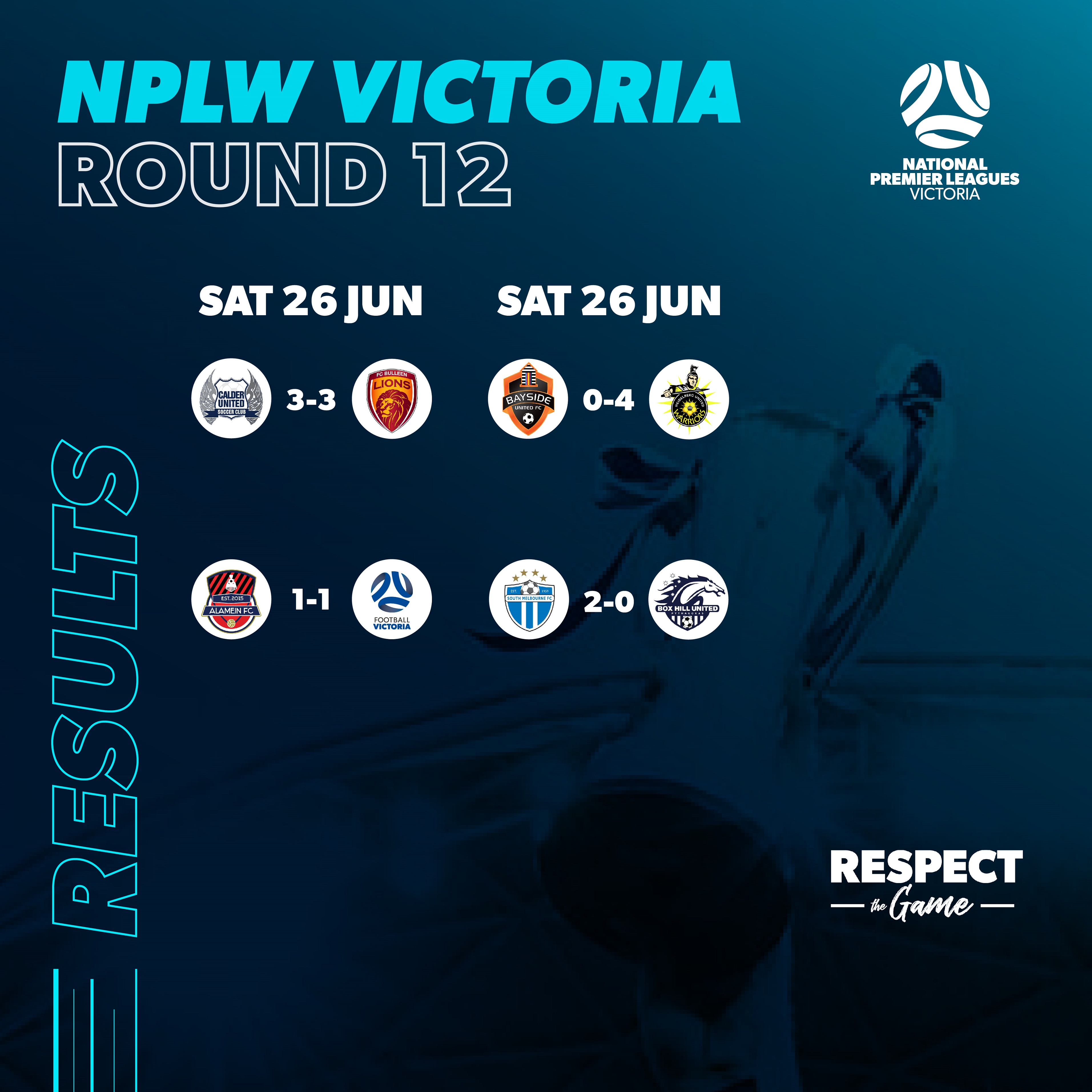 Entering the contest knowing that a win would see them leapfrog the Lionesses on the NPLW Victoria table, Calder made a bright start to the contest: seeking to exploit their speed down both flanks when attacking and maintaining a consistent and highly disciplined defensive block that frustrated their foes attempts to play forward.

And Calder’s strong start to the contest was quickly rewarded after Melissa Taranto was upended by Alex Natoli in the Bulleen penalty area and awarded a penalty that was promptly dispatched by captain Aleks Sinclair.

Breaking through one-on-one with Gaby Garton, Mindy Barbieri made it 2-0 for the hosts on the half an hour mark when she drilled a shot into the bottom corner before Catherine Zimmerman, after some superb work from Caitlin O'Bryan to steal the ball off Grace Toranto and work the ball to the American attacker, threaded an outside of the box effort into the bottom corner of the net ten minutes later.

Bulleen appeared shellshocked in the aftermath of Zimmerman’s strike and, as Calder moved back to their positions for the kickoff, Tiffany Eliadis gathered the side in maroon into a huddle in their own half; gesticulating as she vehemently urged her side to get their act together.

And indeed that goal, combined with further… enthusiastic feedback delivered by coach Caitlin Friend in the dressing room at halftime seemed to breathe new life into Bulleen as it was they and not the hosts that began to dominate play in the second half.

Having seemingly lit the fuse that sparked the comeback, Eliadis cut the deficit to one in the 74th when, after a Vlanjic corner, she pounced on a ball flicked back towards the six-yard-box by former Clader player Alana Burn and thundered a shot home.

Calder’s lead was then erased in its entirety with just two minutes remaining in regulation when, after Alyssa Dall'Oste was pinged by referee Jasmine Steger for holding onto the ball too long, Paige Zois hammered an indirect free-kick into the roof of the net for her second goal in as many weeks.

That sharing of spoils between third and fourth meant that, down at Knox Regional Football Centre, second-placed FV Emerging was presented with a golden opportunity to create some breathing room between themselves and the chasing pack.

Coach Helen Winterburn’s side, however, ran into a roadblock of their own in the form of a dogged Alamein FC, who despite losing keeper Beth Mason-Jones to a red card came within seconds of staging a smash and grab heist of three points from their young foes before being forced to settle for a 1-1 draw.

Though FV Emerging had the best of the chances for the proceeding 69 minutes, it was Alamein captain Emma Runnalls that broke the game open for her side when, looking up, she fired a ball directly into the path of Jennifer Lum to run onto poke beyond Emerging keeper Sophia Varley.

Disaster, however, struck for Alamein just moments later when Mason-Jones stormed out of her area to intercept Caitlin Karic -- who been sprung in behind the visitor’s lines by a surgical through ball -- and upended her in attempting to lay a challenge.

Despite the keeper’s protestations, referee Laura Moya had no hesitation in reaching into her back pocket and flashing a red card: reducing the side in red to ten and forcing outfielder Natasha Inia to don the gloves for the final 20 minutes.

This lack of experience between the posts, as well as Inia’s somewhat diminutive stature, then came back to bite coach Kat Smith’s side with just seconds remaining in the contest when Holly Murray, with Moya looking at her watch, drove a high ball into the area.

On first impressions, it very looked like the Emerging player had simply been trying to find the run of teammate Jessica Young, only for the ball to beat the attacker, bounce once and loop over the head of Inia’s vertical jump and nestle in the back of the net -- much to Murray’s bemusement.

It was a cruel blow for Alamein, who had been able to largely deny their foes any sort of clear look at goal as they sought to hang on for an unlikely win.

Inia, however, didn’t have to wait long for her redemption arc as just a minute later the hosts drove forward again and Young sent in a powerful shot towards goal only for the emergency keeper to keep it out and ensure her side came away with a point.

The draws in Keilor and Knox thusly meant that league leader South Melbourne had the chance to extend their lead atop the table to more than three points for the first time all season against Box Hill -- a chance they grabbed with both hands.

Indeed, it took less than 90 seconds for Hellas to grab the lead at Lakeside Stadium on Saturday: Lucy Johnson playing Caitlin Picket into space behind the Pythagoras lines to allow her to fire beyond Erin Hudson and make it 1-0.

It was then 2-0 in the 23rd minute when Janna Lawson fed the ball to Johnson in the penalty area and the Tasmanian promptly turned and placed her shot just inside the far post to double the host’s advantage.

Both sides had their chances to trouble the scoresheet further as the contest wore on; Lauryn Schaddee Van Dooren forced to desperately clear a ball of her line to prevent it from turning into a 3-0 game in the 35th minute and Emma Langley making South keeper Melissa Barbieri produce a save of the season contender with a long-range effort in the 49th minute.

But when the normally lethal Melina Ayres, much to her disgust, put a close-range effort wide in the 85th minute the writing that there would be no more goals became readily apparent on the wall: South ultimately taking the 2-0 win, three points and going five points clear atop the NPLW Victoria table.

Down at Kingston Heath Soccer Complex, the round’s final contest between Bayside United and Heidelberg United was all about one player: Berger captain Steph Galea celebrating her 100th game in yellow and black in style with a 4-0 win.

Rounding a defender, driving to the byline and delivering a low cutback across the face of goal, Keely Lockhart set up Bonnie Davies to open the scoring in the 11th minute of play for the visitors, before Danielle Wise doubled the Alexander advantage three minutes later when Bayside’s inability to clear their lines allowed her to seize upon a loose ball, round a defender and finish in the face of Lauren Farrugia.

Kirstie Shearing played through Molly-May Ramsay in a rare moment of attacking promise for Bayside in the 49th minute, only for Berger keeper Natasha Stathopoulos to snuff out the danger by charging off her line, close down the angle and block the resulting shot.

But the Lockhart and Wise combination promptly came up big for the visitors in the 65th minute of play when the former broke down the right flank, drove inside and laid off a pass that Wise cooly guided beyond Farrugia to make it three for coach Jono Clemente’s side.

Stathopoulos was then called into action to deny two good chances for Bayside’s Amanda Stevenson, before Wise won a free-kick just outside her foes penalty area that Galea stepped up to take and curled into the bottom corner of the net to complete the win. 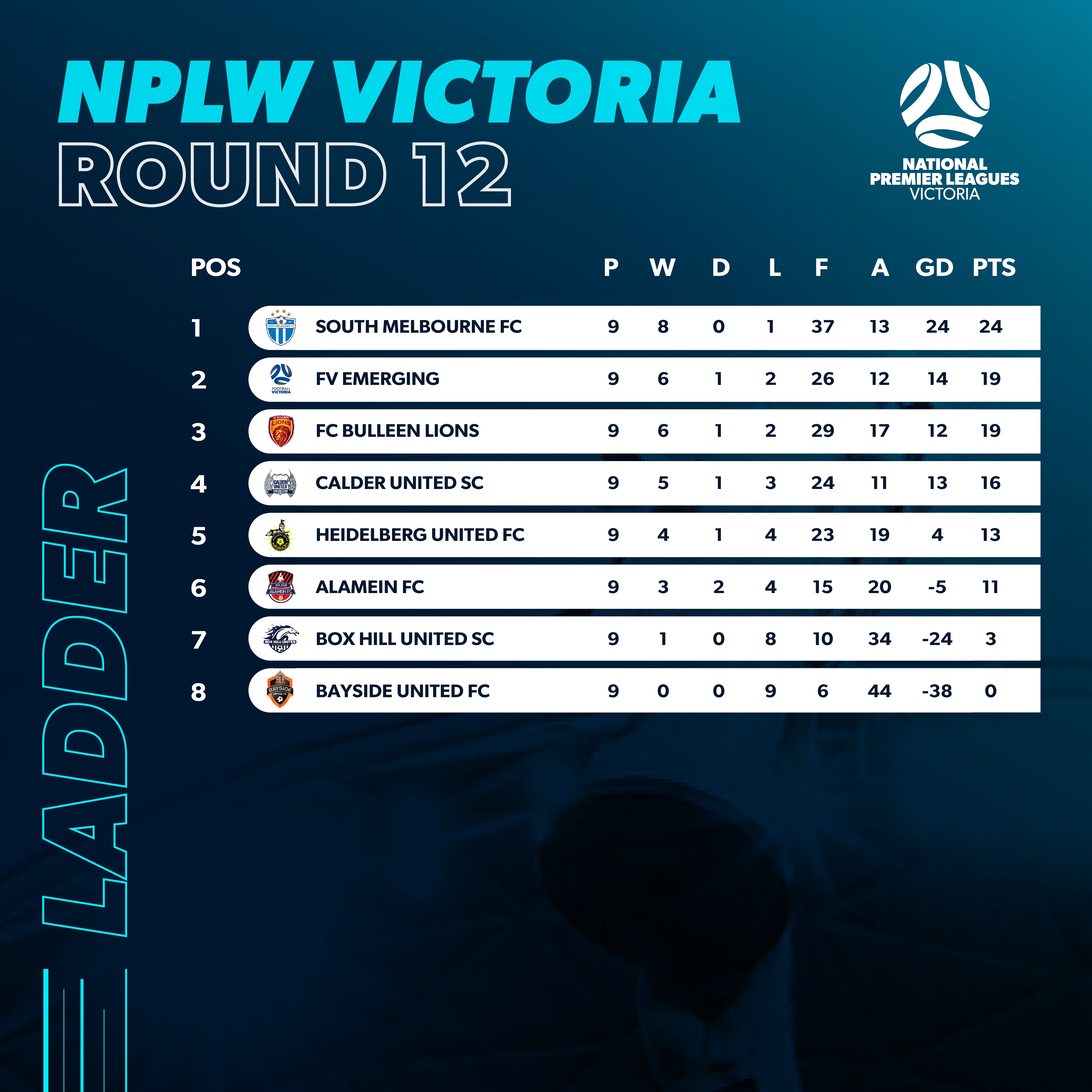