Sometimes in the Victorian top flight, teams will find themselves unjustifiably in a position that they’d rather not be in. But the cream will rise to the top. Ooh yeah.

And indeed, the tenth round of the NPL Victoria season was one dominated by its heavyweights: the top-four all recording wins and defending champions Bentleigh Greens leaping back into the top-six. 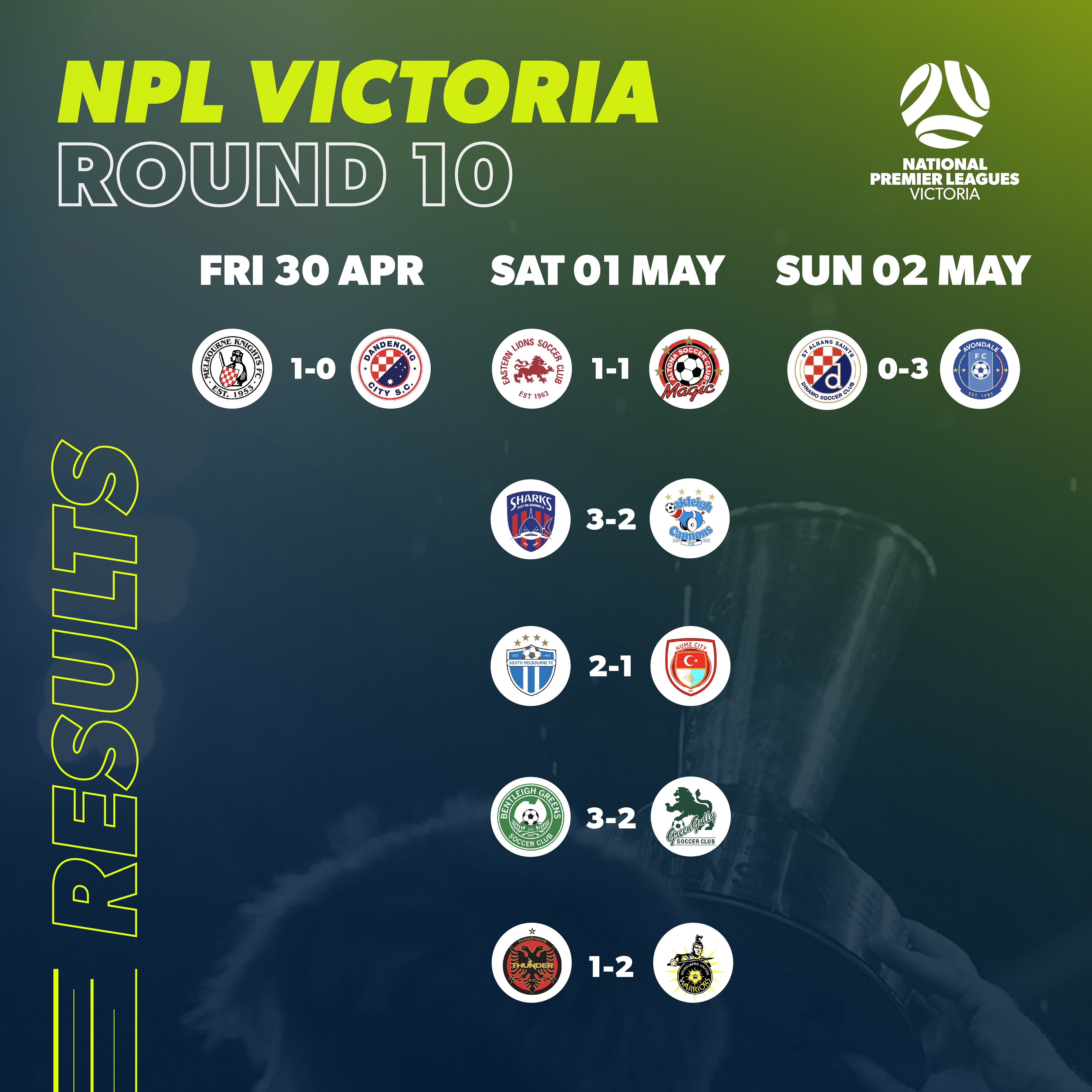 Knowing that the Greens were looming ominously in their rearview mirror, Melbourne Knights kicked the weekend off on Friday evening by welcoming Dandenong City to the House that Dukes built; coach Saša Ogeneovski’s visitors still looking for their first win of the 2021 season.

In what proved to be a testy encounter -- eight yellow cards and an 82nd minute straight red to Dandy’s Marko Delic were handed out by referee Jack Morgan -- Hajduk’s Gavin De Niese had the best of the opening stanza’s chances when he unleashed with a long-range effort that just sailed wide of Jasmin Keranovic’s goal in first half stoppage time.

Both sides had their chances to break the deadlock in the second, Ayden Brice’s sumptuous flick on and Trevor Ssemakula’s follow up effort for the coach Steve Bebic’s Knights in the 76th minute somehow kept out by the visitors, but with time wounding time the game remained locked at an equilibrium.

At least, that was until Mohammed Sumaoro made a darting run down the left and delivered an inch-perfect cutback that allowed fellow second-half substitute Alun Webb to side-foot a shot beyond a scrambling Keranovic to secure the three points for Croatia.

Sitting above the Knights in third position on the table, Heidelberg United made it three wins on the bounce after coming from behind to down Dandenong Thunder 2-1 at George Andrews Reserve on Saturday evening.

Creating a series of early chances, the hosts eventually took the lead in the 35th minute of play when a long throw in by Nahuel Bonada made its way through the Berger defence and allowed new signing Hamish Watson to blast a close-range effort past Berger custodian Chris Theodoridis.

But up for an early second-half set piece, Ajdin Fetahagic’s 48th minute header served to tie proceedings back up in the Southeast, before Luka Ninkovic’s half-volleyed second bite of the cherry with 15 minutes to go sealed the win for Alexander.

Proceedings then proved relatively straightforward for second-placed Avondalde FC in their meeting with St Albans Saints on Sunday afternoon; the Avengers downing Dinamo 3-0 at Churchill Reserve.

Two penalties given away by St Albans keeper Jake Angelovski gave the visitors a two-goal buffer within half an hour of the contest, with Stefan Valentini converting both spot kicks and Angelovski earning his marching orders for two yellow cards.

Sime Brzoja hit the woodwork for the ten-man Saints in the 74th minute as they attempted to fashion some sort of comeback, only for Valentini’s third goal of the game in the 82nd minute to put the game to bed and ensure that the lads from Avenger Park stayed ahead of their rivals from Olympic Village.

Avondale, Heidelberg and Knights, however, all remain in pursuit of South Melbourne atop the table after Hellas continued their unbeaten start to 2021 by recording a 2-1 win over Hume at Lakeside Stadium on Saturday afternoon.

Cutting down the left flank, some sterling work from winger Gerrie Sylaidos helped the hosts seize the advantage in just the ninth minute of play: the former Melbourne City and Northcote man losing his man before sliding Perry Lambropoulos into the area, who in turn set up Josh Barresi to fire past Michael Weier.

Josh Bingham came agonisingly close to levelling things up in the 36th minute when he broke in on goal and lofted a little chip over the top of advancing South keeper James Burgess, only for the ball to just bounce wide of the far post.

Luke Pavlou then must have thought he’d made it two for South in the 68th minute when he thundered a half-volleyed effort in towards goal only for Weier to deny him with a stunning diving save.

But despite getting one hand to it, Weier was unable to prevent Harrison Sawyer’s breakaway effort from rolling over the line to make it 2-0 in the 89th minute - the big man’s fourth goal of the season ensuring that Bingham’s 92nd minute goal ended up being a consolation.

Unlike their higher rivals, though, sixth-placed Oakleigh Cannons’ grip on the top six loosened after coach Chirs Taylor’s side were downed 3-2 by the Sharks of Port Melbourne at JL Murphy Reserve.

Former Brisbane Roar and Adelaide United midfielder George Mells opened the scoring for the hosts in the 22nd minute when he coolly sent Cannon keeper Nick Feely the wrong way.

The former Chelsea and Southampton youth prospect then secured his brace and doubled the host’s advantage in the 67th minute, a lead that was then stretched to three when he converted for a hat-trick in the 73rd.

Wade Decker’s close-range finish in the 76th minute and Anthony Pantazopoulos well-taken left footed volley in the 80th minute made things interesting for both sides late, but the hosts ultimately held on for an important three points that moved them to within a game of the finals places.

Leapfrogging the Cannons into fifth position on the standings are coach Nick Tolios’ Bentleigh Greens, who downed Green Gully 3-2 at Kingston Heath Soccer Complex to earn bragging rights in the latest edition of Victoria’s ‘Big Green’.

The hosts, however, were made to work hard for their points after Nicholas Georgopoulos’ delicately placed 25th minute shot and Alex Salmon’s left-footed effort into the bottom corner of Javier Lopez’s net in the 40th minute sent the visitors to the sheds with a two goal buffer.

But when Greens’ captain Jack Webster headed home from a corner in the 55th minute, the comeback was on.

Like Dandenong City, Altona Magic exited round ten of the season still looking for their first win of the campaign after being forced to come from behind and steal a late, late draw with Eastern Lions at Gardiners Creek Reserve.

Looking to snap a three-game losing run in league player, the hosts took the lead in the 17th minute of play after Magic defensive midfielder Troy Ruthven’s enthusiastic attempt to clear a ball loose in the area collected Aaron Fabris’ ankle rather than his target - giving away a penalty duly dispatched by Ioannis Georgopoulos.

Having secured the early goal, the Lions continued to shade the balance of play as the first half continued but, having been forced to go 120 minutes against State League side Mornington SC in mid-week FFA Cup action, were unable to maintain their control into the second 45 as the Magic wrested back momentum.

It would take until the 92nd minute of the contest for this ascendency to bear fruit, however, but Jonas Markovski’s cutback and the subsequent finish from A-League veteran Vince Lia was nonetheless an important one for the visitors: the point moving them off the bottom of the table and to within a win of 12th placed St Albans. 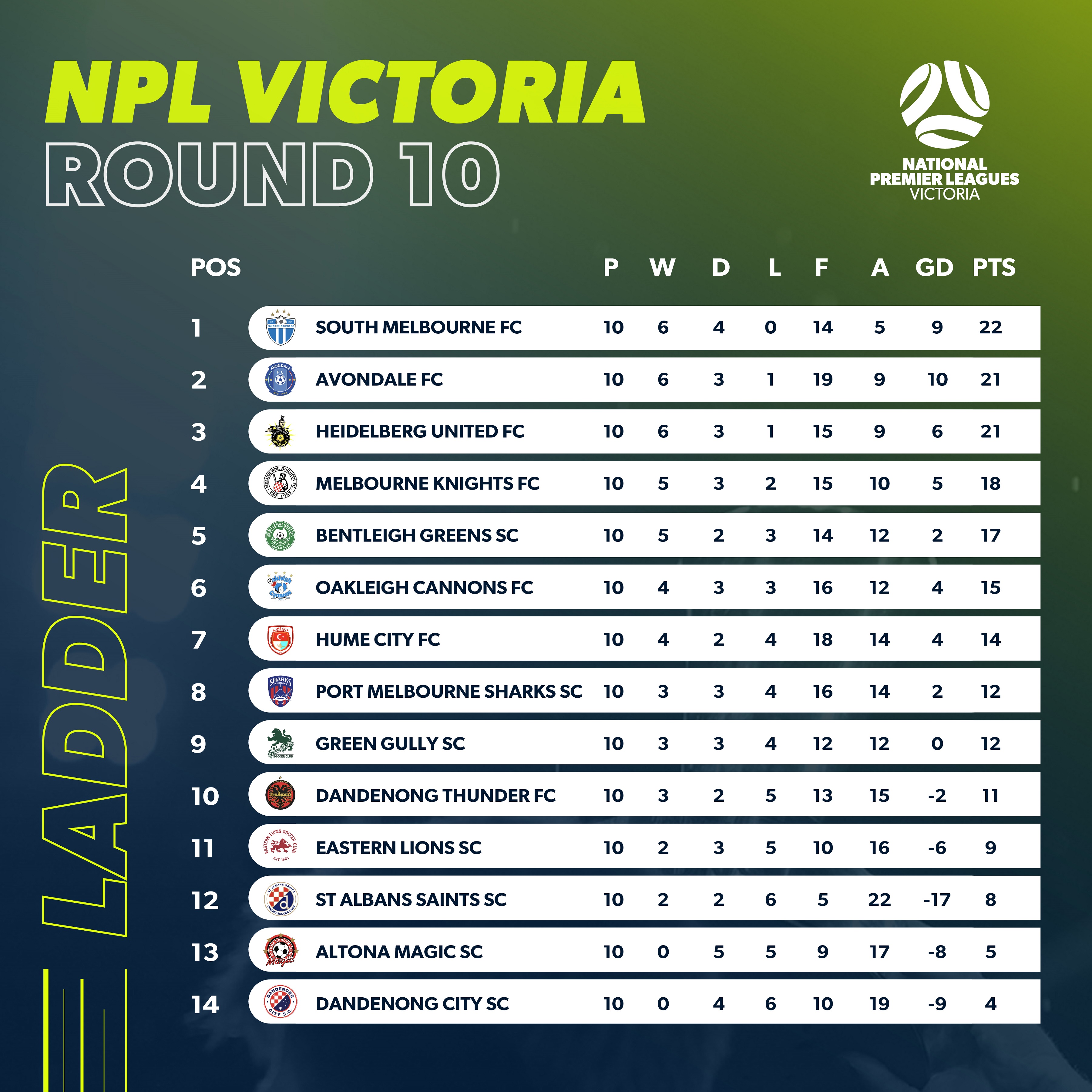