To accommodate the staging of FFA Cup games over the Easter Weekend, the sixth round of the 2021 NPL Victoria season was staged on Wednesday evening last week; the unorthodox timing perhaps auguring the upheaval and upsets that were to come in both league and Cup play.

The biggest sea change occurred at the very pointy end of the top-flight’s table after Melbourne Knights slipped all the way from first to fifth as a result of falling to a suddenly red-hot Heidelberg United. Adding salt to Knight wounds, they’ve been replaced at the summit by old foes South Melbourne, who continued their undefeated start to the season by downing Dandenong Thunder 1-0.

After relying on some late, late magic to rescue a point against Avondale FC the week prior, Croatia had almost flipped the script entirely in the early stages of their meeting with the Bergers when striker Alun Webb had a shot cleared off the line after less than a minute. 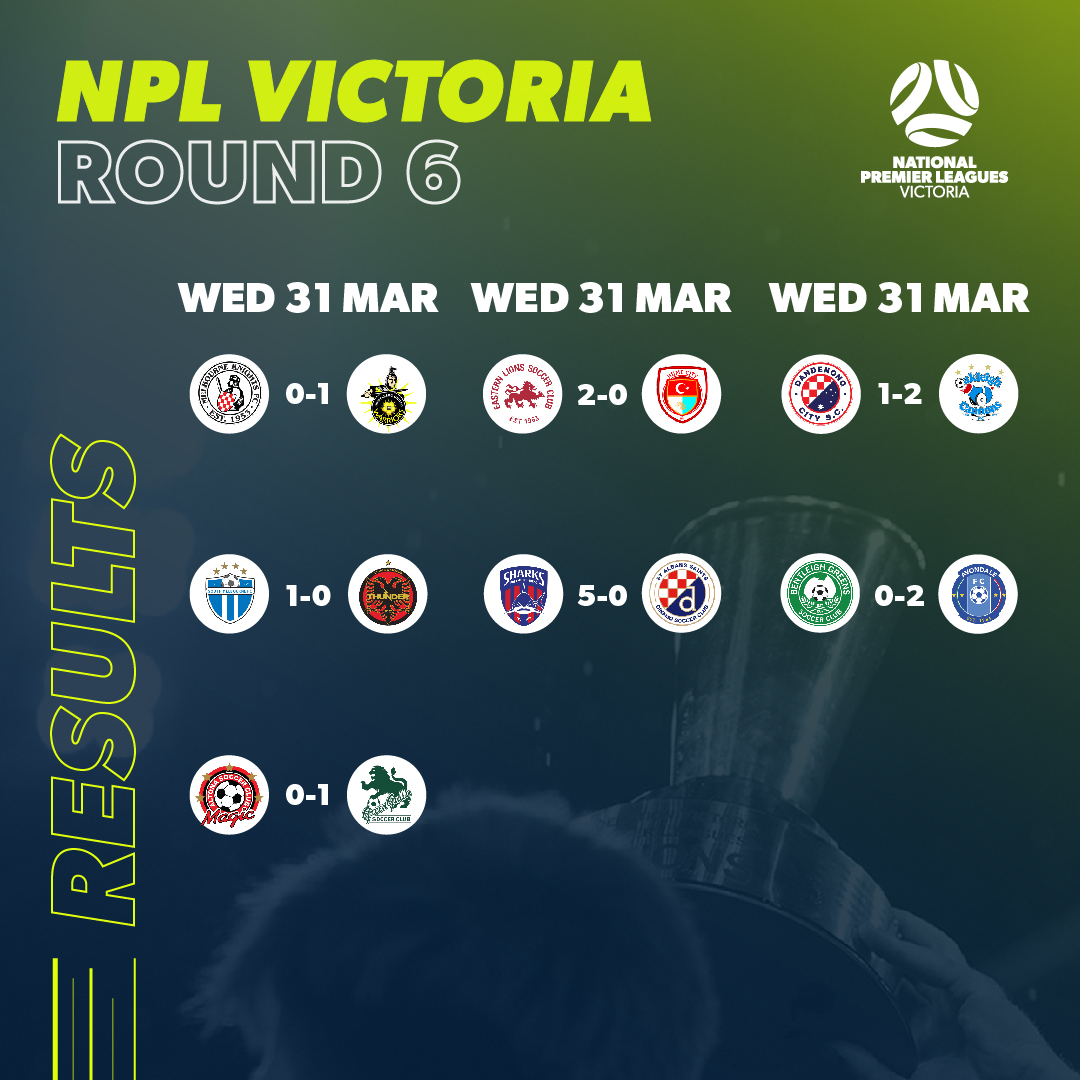 But with that golden opportunity going begging at Knights Stadium, it would ultimately take almost the entire game for a ball to eventually make its way across the goal line.

Unfortunately for the hosts, it wasn’t they that were responsible for its journey.

Getting on the end of a long ball from Dane Milovanovic in the 82nd minute of play, it was Alexander’s Sean Ellis who ultimately proved the difference-maker on the evening; the Scott collecting the pass from the second-half substitute before cutting inside onto his preferred left foot and placing an effort beyond Tom Manos in the host’s net.

Winners of three straight, the result propelled the Bergers into fourth-place on the NPL Victoria table but, alas for George Katsakis’ side, it failed to provide them with momentum for the weekend’s FFA Cup action: NPL3 side Nunawading City upsetting the Victorian heavyweights 2-1 on Saturday afternoon.

Knights, for their part, bounced somewhat back to defeat State League side Old Scotch.

The door at the summit of the table left open, South, belatedly, walked through it thanks to a late goal from attacking dynamo Gerrie Sylaidos against the Thunder out at Lakeside Stadium.

Played into the penalty area by Brad Norton in the 85th minute, the diminutive attacker’s subsequent run to the byline initially appeared to leave only an attempted cutback as a viable option; Zac Bates making a beeline for the six-yard box to present an option.

But he surprised everyone - especially Thunder goalkeeper Francis Soale - when he flicked a deft shot inside the far post at a highly acute angle; winning the game for Hellas and sending them top of the table.

South would go on to taste success in the weekend’s Cup action, beating NPL2 side Werribee City, whereas the Thunder fell to fellow NPL Victoria side Green Gully 2-0.

Elsewhere, Avondale FC and Oakleigh Cannons also took advantage of Croatia’s stumble to leapfrog them on the table, with the Avengers downing Bentleigh Greens 2-0 in Melbourne’s Southeast and the Cannons coming from behind to keep Dandenong City winless.

Things had initially been looking good for Hajduk down at Frank Holohan Soccer Complex when a Christian Cavallo free-kick skittled a host of players on its way to the swinging left boot of Steven Topalovic in the 47th minute - the City captain’s shot thundering past Cannon keeper Nicholas Feely.

But Sasa Ognenovski’s side proved unable to defend their lead and crashed to their fifth straight defeat after Matthew Thurtell and Wade Decker struck in the 66th and 71st minutes respectively to secure the three points and fourth place on the table.

A 3-0 win over Mazenod FC would then follow for coach Chris Taylor’s side in their weekend’s FFA Cup fixture, while City will seek to break their five-game losing run with a win in their postponed tie against Richmond.

Denied the chance to go top by Caleb Mikulic’s late equaliser for Knights the round prior, things proved relatively more straightforward for the Avengers down in Kingston Heath.

The Greens’ Corey Sewell shown a straight red card in just the 10th minute of the contest, Yusuf Ahmed’s fourth goal on the season promptly put coach Zoran Markovski’s side ahead on the half an hour mark before Liam Boland added a sealer in the 91st minute when he sliced an effort home following a rapid move forward in transition

Losers of two straight, Bentleigh will look to get things back on track on Monday evening when they face Essendon Royals in their first game of the 2021 FFA Cup, while Avondale has already secured progression to the fifth round after a simple, 6-0 win over Beaumaris SC.

Somehow surviving Marko Delic’s one-on-one chase with goalkeeper Keegan Coulter in the 56th minute with their clean-sheet still intact, Eastern Lions produced the upset of NPL Victoria’s sixth round in going on to win that contest 2-0.

The fixture being played at the Grange Reserve instead of their normal haunt of Gardiners Creek Reserve, Chris Droutsas put the nominal hosts ahead in the 74th minute after he reacted quickest to a shot dragged across the front of the goal and poked home.

Droustas then brought down inside the Hume penalty area minutes later, his side then sealed the unlikely result from the penalty spot through the boot of Ioannis Georgopoulos.

Moving into eighth on the table with the win, the Lions would subsequently make it a week to remember on Saturday when they downed State League side South Springvale 7-1 to advance to the fifth round of the FFA Cup. A frequent sight in the national stages, Hume also advanced to the fifth round of Victorian qualifying - albeit in a manner that won’t grant any momentum due to opponents Warragul United forfeiting the fixture.

Green Gully also returned to the NPL Victoria top-six on Wednesday evening - and kept a slumping Altona Magic winless - by recording a 1-0 win down at Paisley Park.

Played in on goal by Melvin Becket in the 47th minute, Luc Jeggo proved the difference maker between the two sides in the contest, although Alex Salmon should have made it 2-0 in the 73rd minute when he burst through one-on-one with Magic keeper Chris Oldfield.

The loss representing their third league defeat on the bounce, things went from bad to worse for Altona on Saturday when they were defeated 1-0 by Ballarat City and knocked out of the FFA Cup.

As dramatic as other results around the state were, there were no such heart palpitations on the menu at JL Murphy Reserve for the final fixture of the Victorian top-flight’s sixth-round: Port Melbourne Sharks pouring in four second-half goals to dispatch Saint Albans Saints 5-0.

Ben Liftin opened the scoring for coach Adam Piddick’s side in the 40th minute of the contest, before fresh Queensland import Jackson Courtney-Perkins made it two ten minutes into the second stanza.

Sharks’ attacker Chris Duggan then entered somewhat of a feeding frenzy: netting a 12-minute hattrick to seal the heavy victory and move Port Melbourne into the seventh position on the NPL Victoria table.

Undefeated in three, Duggan and his teammates will look to keep their momentum going when they travel to face Berwick City in FFA Cup action on Monday evening. There will be no such magic on the menu for the Saints, though, who were knocked out of this year’s iteration of the Cup by Altona North SC on Saturday. 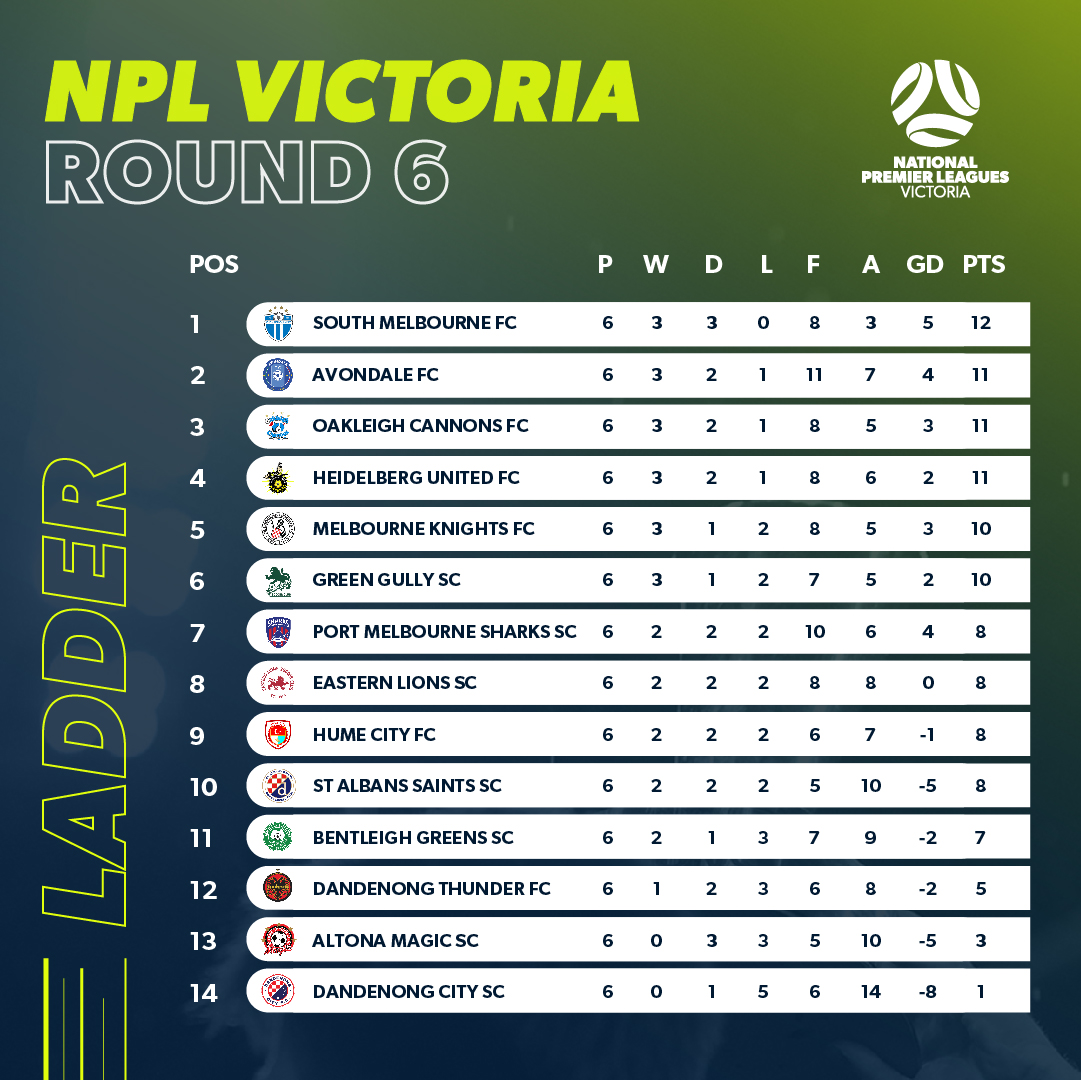