Late drama was afoot in a number of fixtures as NPL Victoria returned from its FFA Cup break for round seven but, when all was said and done, still undefeated South Melbourne remained atop the table.

His side making the trek to Green Gully Reserve, Harrison Sawyer went close to opening the scoring for South in the 22nd minute of his side’s meeting with Gully when he was found inside the area by a Zac Bates cross but put his shot wide of the goal.

Young gun Nicholas Georgopoulos then stung the hands of Hellas keeper Pierce Clarke up the other end ten minutes later. Gerrie Sylaidos had a strong chance in transition just before the half but the attacker - who scored South’s winner against Dandenong Thunder the previous round - put his left-footed shot onto the crossbar. 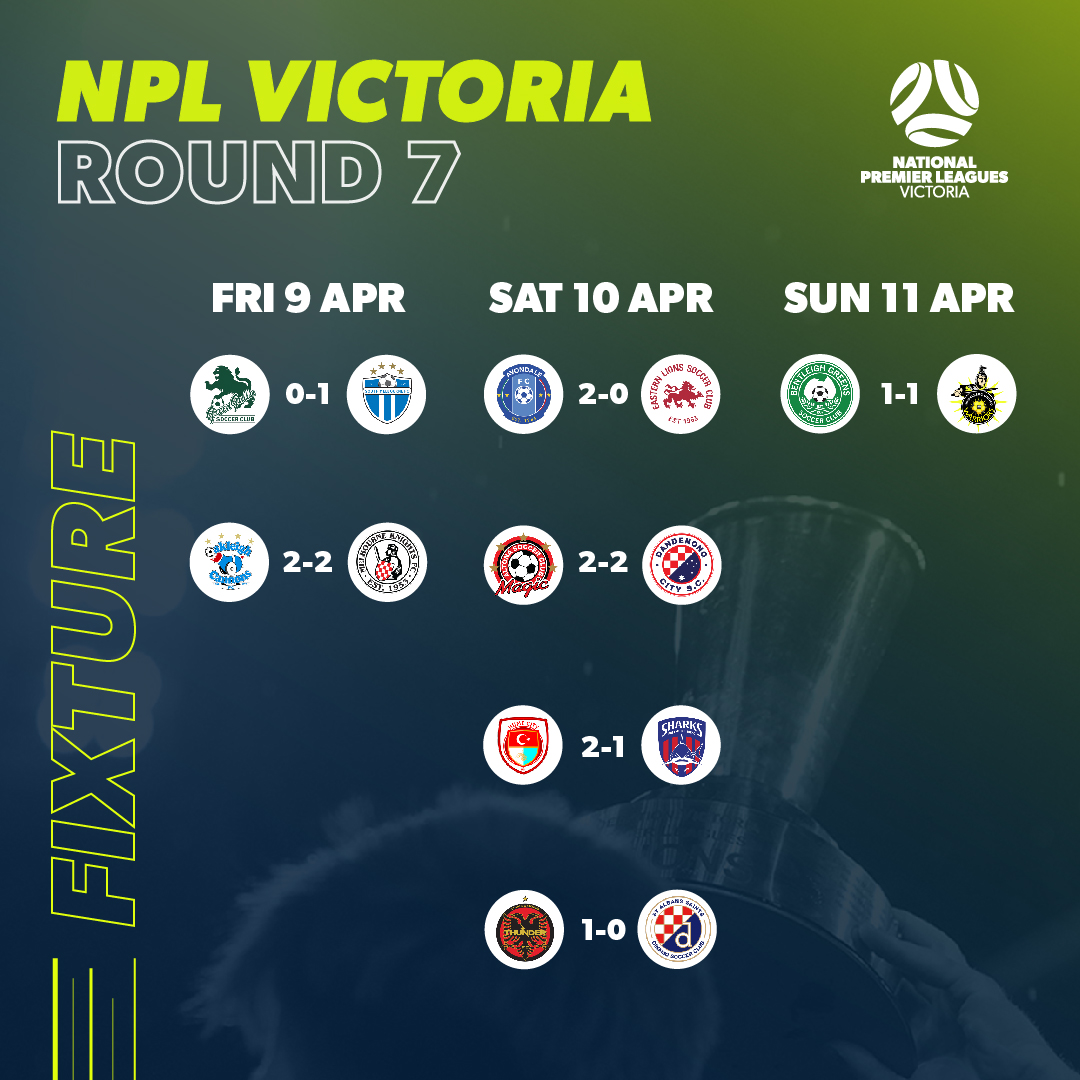 In the end, it took a moment of hold-up play brilliance from Sawyer to spark his side to life; the big man collecting the ball as his team broke quickly in the 83rd minute, turning well and just managing to play through Marcus Schroen in a manner that allowed him to convert.

The result means that South acheived the rare feat of having both their men’s and women’s sides simultaneously sit atop the Victorian top-flight at the end of a weekend - South’s women downing FC Bulleen Lions 7-1 on Monday evening on the opening round of the NPLW Victoria season.

Elsewhere on Friday, Oakleigh Cannons and Melbourne Knights were forced to share the spoils in their heavyweight matchup: playing out a 2-2 draw at Jack Edwards Reserve.

James McGarry gave the visitors the lead in the 19th minute of proceedings when his side was awarded a free-kick right on the edge of the penalty area - firing the resulting set into the top corner of the net.

Both sides went on to have multiple chances to find the goals as the opening stanza wore on, but it would take until Matt Thurtell’s 50th-minute effort for the scoreboard to be troubled, with the Oakleigh attacker getting a glancing header in on goal that Tom Manos was unable to keep out.

Despite coach Chris Taylor being shown a red card by referee Lachlan Keevers in the 55th minute, the hosts were subsequently still able to make it 2-1 just five minutes past the hour mark when Matt Foschini, with sublime skill, broke down the right flank and deftly chipped the ball over the head of Manos and inside the far post from a sharp angle.

However, the Knights were able to fight back and, after being awarded a penalty for a handball in the 67th minute, were able to knot things back up at two apiece when Alun Webb fired home from the spot.

Doing their best to put some distance between themselves and Knights and Oakleigh, as well as keep pace with table-topping South, Avondale produced a 2-0 win over Eastern Lions in the two side’s meeting at the Reggio Calabria Club on Saturday afternoon.

Striking in the 15th and 24th minutes, Avengers’ talisman Liam Boland took his season goal tally to four as he put his side ahead - a lead that coach Zoran Markovski’s side would never relinquish.

The Lions’ best chance of making the hosts sweat arrived in the dying moments of the first half when referee Michael Mammis awarded them a penalty for a foul on Ioannis Georgopoulos. The veteran figure, though, was unable to convert when he stepped up to take the resulting set-piece: firing his effort into the crossbar.

Both Altona Magic and Dandenong City entered their meeting of the NPL Victoria cellar-dwellers on Saturday evening searching for an elusive first win of 2021 but, alas for both, then played out a 2-2 draw at Paisley Park.

The Magic and their newly announced permanent gaffer Nik Kovacevic, though, left it very, very late in securing that point.

Turning in a Delarno Pharoe cross in the 32nd minute, Gavin De Niese had opened the scoring for Hadjuk, before Nicholas Dib doubled the advantage of coach Saša Ogeneovski’s side when he fired home in the 53rd.

Nonetheless, knowing that a loss would see them consigned to the bottom of the table in City’s place, the Magic rallied and were able to cut the deficit to one when Harrison Reeves fired into the roof of the net in the 87th minute.

The rescue effort was then completed three minutes into injury time when Jonas Markovski picked out Jon McShane inside the area and the big man turned, manoeuvred to open up an angle and poked the ball home.

Elsewhere on Saturday evening, Hume City moved into the top six and recorded their third win of the 2021 campaign by defeating Port Melbourne 2-1 out at ABD Stadium.

Initially, it appeared as though Josh Bingham’s effort on the half an hour mark - the Hume number nine turning in a cutback from Andy Brennan - would be the only goal of the contest as both sides squandered numerous chances as the clock ticked over in Melbourne’s Northwest.

But there was late drama yet to come.

First, former Brisbane Roar youth Aaron Reardon’s powerful header from a corner was, somehow, kept out by Hume keeper Michael Weier. Then, a long ball played over the top of the Shark defence fooled visiting keeper Andrew Withers with its flight - bouncing over his efforts to play sweeper keeper and allowing Marko Delic to sneak in and make it two.

In Saturday evening’s final contest, the Thunder also picked up a valuable win - just their second of the season - in downing visiting St Albans out at George Andrews Reserve.

Having had the lion’s share of chances up to that point, the Thunder took the lead in the 63rd minute when Giuseppe Marafioti’s cross in from the right snaked its way through a horde of Thunder and Dinamo shirts and landed at the feet of Paul Kuol on the left-hand side of the penalty area.

With all the time in the world to tee up his shot, the second-half substitute made no mistake with his subsequent attempt: placing home what would prove to be the winner and somersault-backflipping away in celebration.

Still looking to find their groove in 2021, Bentleigh Greens took the lead in the encounter with Heidelberg United out at Kingston Heath on Sunday afternoon, but were ultimately forced to settle for a 1-1 draw with visiting Heidelberg United.

After having a Bradyn Crowley flick-on goal disallowed in the 13th minute and having another attempt cleared off the line in the 42nd, former Socceroos striker Brent McGrath eventually put the Greens up in the 52nd minute when he got on the end of a cross to turn in from close range.

Things took a turn for the Bentleigh front man minutes later, though, when he received two yellow cards in less than ten minutes from referee Adam Bavcar: earning his marching orders and handing a lifeline to Alexander.

It was an opening coach George Katsakis eventually took advantage of when, after being awarded a penalty for a handball inside the penalty area in the 82nd minute, Dusan Bosnjak equalised and forced the spoils to be shared.