With over a third of the 2021 NPL Victoria season now officially in the books, undefeated South Melbourne continues to set the pace for the competition but, looming ominously in the not-so-distance are the twin spectres of Avondale FC and Heidelberg United.

Looking to record their fifth-win on the trot, South were on teams in action on Friday evening when they travelled down to Melbourne’s Southeast to take on Dandenong City - coach Saša Ogeneovski’s side looking to use the momentum of back-to-back draws to record their first win of the campaign. 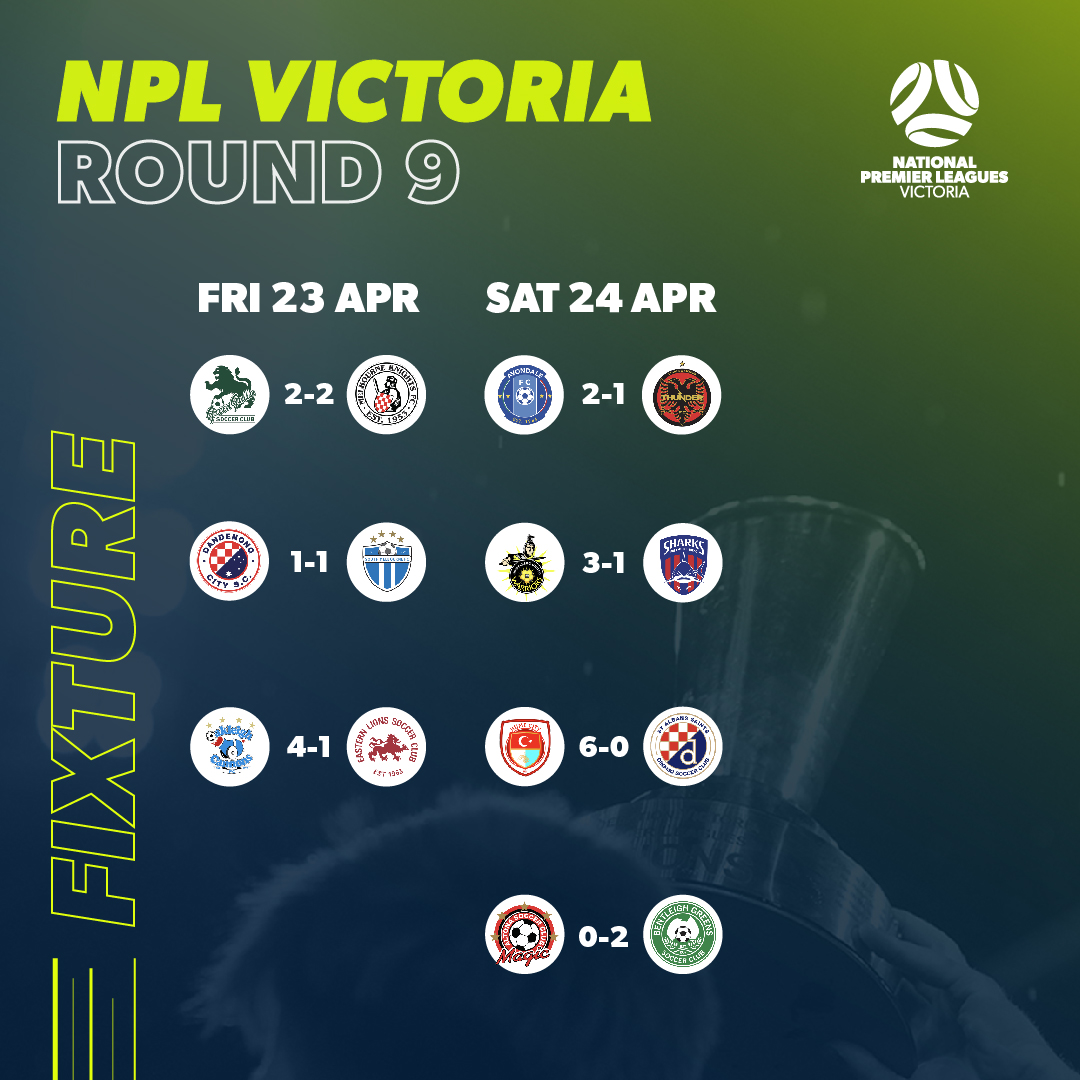 Giving the home fans hope this was about to come to pass, Marko Delic, making his Dandy debut after crossing over from Hume City, fired home an unstoppable, top corner effort past South custodian Pierce Clarke in the 36th minute of the contest to open the scoring.

Yet despite being frequently frustrated by Dandy City keeper Jasmin Keranovic, Hellas nonetheless persevere in their attempts to keep their 2021 copybook unblemished and were eventually rewarded for their endeavour in the 79th minute when Henry Hore and Daniel Clark combined well to allow the latter to fire home an equaliser.

The point earned at Frank Holohan Soccer Complex brought South to a total of 19 on the season, a figure now just one clear of the Avengers and Alexander after the latter pair recorded wins over the weekend.

Hosting Dandenong Thunder at Avenger Park, a deflected and bouncing long-range free kick from spearhead Liam Boland put Avondale up in the 26th minute of their contest on Saturday afternoon; the big man’s fifth goal of the season.

Nonetheless, with equilibrium restored in the 69th by Nahuel Bonada - his nicely taken finish his sixth of the season - it appeared as though the hosts were set to drop points in their quest to keep pace with the league leaders, only for Christos Theodorakopoulos to strike at the death.

Twisting and turning Keagan Sheridan inside out, the second-half substitute let loose with a right-footed effort from the edge of the area in the 95th minute that beat Francis Soale in the back of the Thunder net and sent Avenger Park into bedlam.

Luckily for the assembled fan’s heart-health, things weren’t anywhere near as dramatic for the Bergers out at Olympic Village: coach George Katsakis’ side downing Port Melbourne 3-1 on Saturday afternoon.

Opening the scoring in the 33rd minute when Takeru Okada turned in an excellent cross from a sliding Josh Wilkins, Heidelberg ended up taking a two-goal buffer into the break when Port’s Kris Kioussis inadvertently turned a corner into his own net on the stroke of halftime.

The Sharks were able to give themselves some measure of hope when, as rain began to hammer down, Omar Ammache headed home from a corner in the 53rd minute to make it 2-1, only for Dusan Bosnjak to subsequently put the game to bed when he fired home from the spot in the 72nd.

Out in the West, Melbourne Knights and Green Gully clashed in a battle of the local rivals on Friday evening, with the two storied clubs ultimately being forced to share the points at Green Gully Reserve.

Picked out in open space atop the Knights’ penalty area after they lost track of him on a corner kick, Luc Jeggo opened the scoring for Gully in the 23rd minute of the battle when he bounced his resulting effort off the turf and beyond the outstretched gloves of Tom Manos.

The Knights, though, restored the game to parity minutes into the second stanza when coach Steve Bebic’s side picked out an attempted Gully clearance and sent the ball back to Felipe Sanchez, who turned Jordan Hall magnificently and fired home.

Croatia then thought they had the game one in the 89th minute when a superbly dinked cross from Caleb Mikulic found an open Matthew Breeze - with the former Gully man firing home an equally superb volleyed finish.

But Jeggo and Alex Salmon had other ideas, with the latter firing home from close range in the 91st minute after the former had a long-range effort clatter off the bar and back into play to secure a last-gasp draw.

Proceedings were far more simple for the Oakleigh Cannons on Friday, as Chris Taylor’s side, eventually, recorded a comprehensive 4-1 win over Eastern Lions at Jack Edwards Reserve.

Belying what was to come, it was the Lions’ Ardi Ahmeti that opened the scoring in the contest when he collected a cross from Ziggy Razuki and fired past Nick Feely in just the seventh minute of the contest.

But Tyson Holmes’ 18th minute leveller served to ensure that the fixture would be locked at 1-1 entering the halftime break, and from there, the Cannons fired away.

Matthew Thurtell made it 2-1 in the 51st minute, before a brace fired home by Joe Knowles in the 61st and 75th minutes made it 4-1 and secured a three points which moved the Cannons above Knights on the table via goal difference.

The scoreline was even more comprehensive out at ABD Stadium on Saturday evening, with Hume City putting visiting St Albans to the sword by way of a 6-0 thrashing.

Getting the first of what would later become a brace, Andy Brennan put coach Nick Hegarty’s side ahead in the 19th minute out in Melbourne’s Northwest, before Josh Bingham then made it two five minutes later.

Fijian national team captain Mitch Cooper then made it 3-0 just beyond the half an hour mark, before further goals from Brennan, Theo Markelis and Kaan Elibol as the second half progressed sealed the heavy win.

Altona Magic’s horrific start to the season continued in Saturday, and the round’s final contest, as the side from Paisley Park slumped to their fourth loss in five games against Bentleigh Greens and, by virtue of Dany City’s draw, bottom of the NPL Victoria table on goal difference.

Mirroring Delic’s finish from the night before, former Cerezo Osaka prospect Pierce Waring put the visiting Greens ahead in the 23rd minute of play when curled a fantastically placed shot inside the far post from the corner of the Magic penalty area.

The lead was then two in the 37th minute when, in a bit of pure route-one stuff, Braedyn Crowley brought down a long-ball played out from his own defence inside the Magic penalty area, turned his man inside out and finished well.

2-0 is then how it would end; the Greens and their 14 points kept out of the NPL Victoria top-six by goal difference alone. 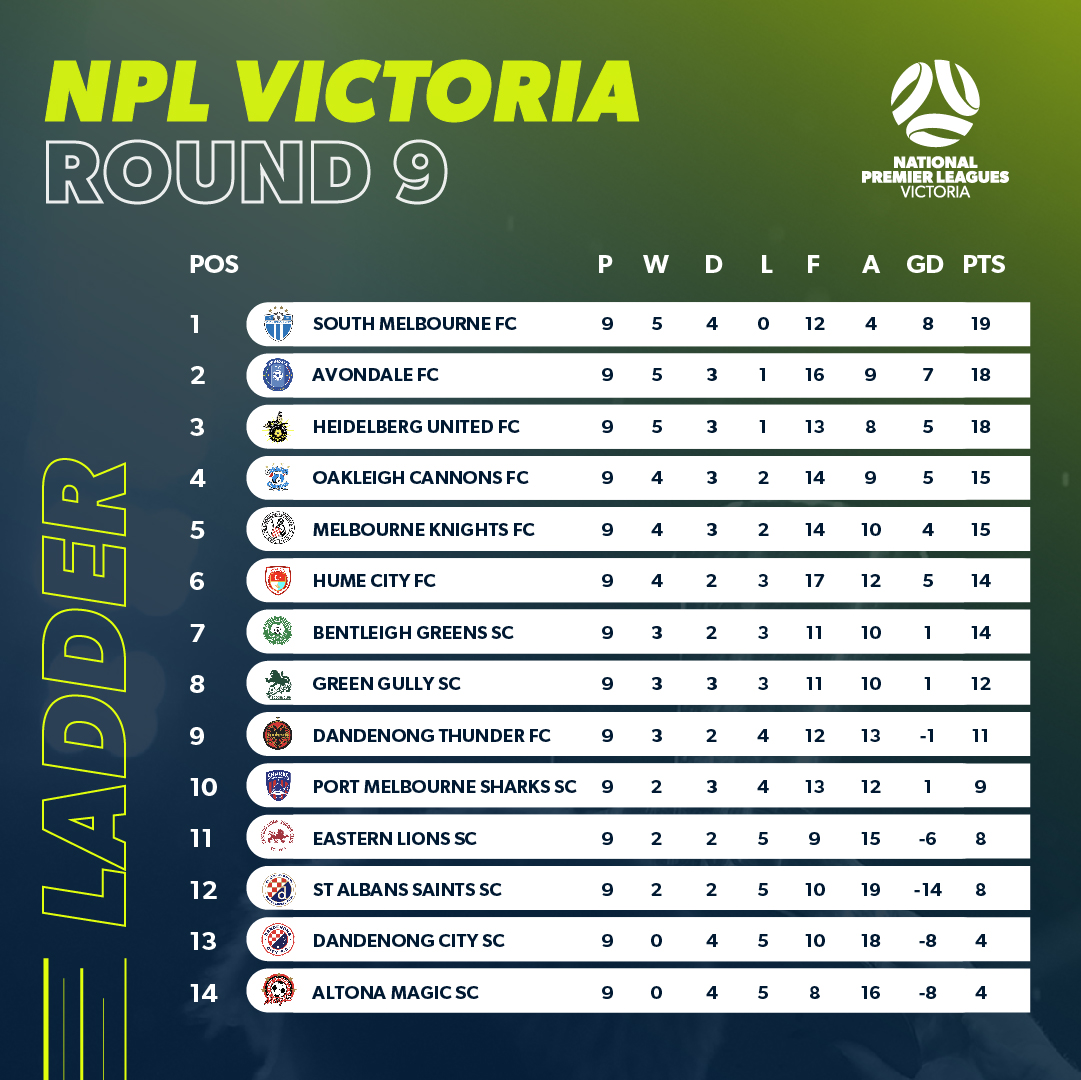