After eleven rounds of the 2021 NPL Victoria season, it’s becoming abundantly clear that whichever side lifts the Premiers’ Plate at the end of the season will have earned it: just two points separating first from fifth on the league’s table almost three months into the campaign.

Further emphasising the parity that has gripped the Victorian top-flight, South Melbourne became the final side to register a loss on the season this week - going down 1-0 to Melbourne Knights on Saturday evening - and, in doing so, were immediately knocked from the first position on the table. 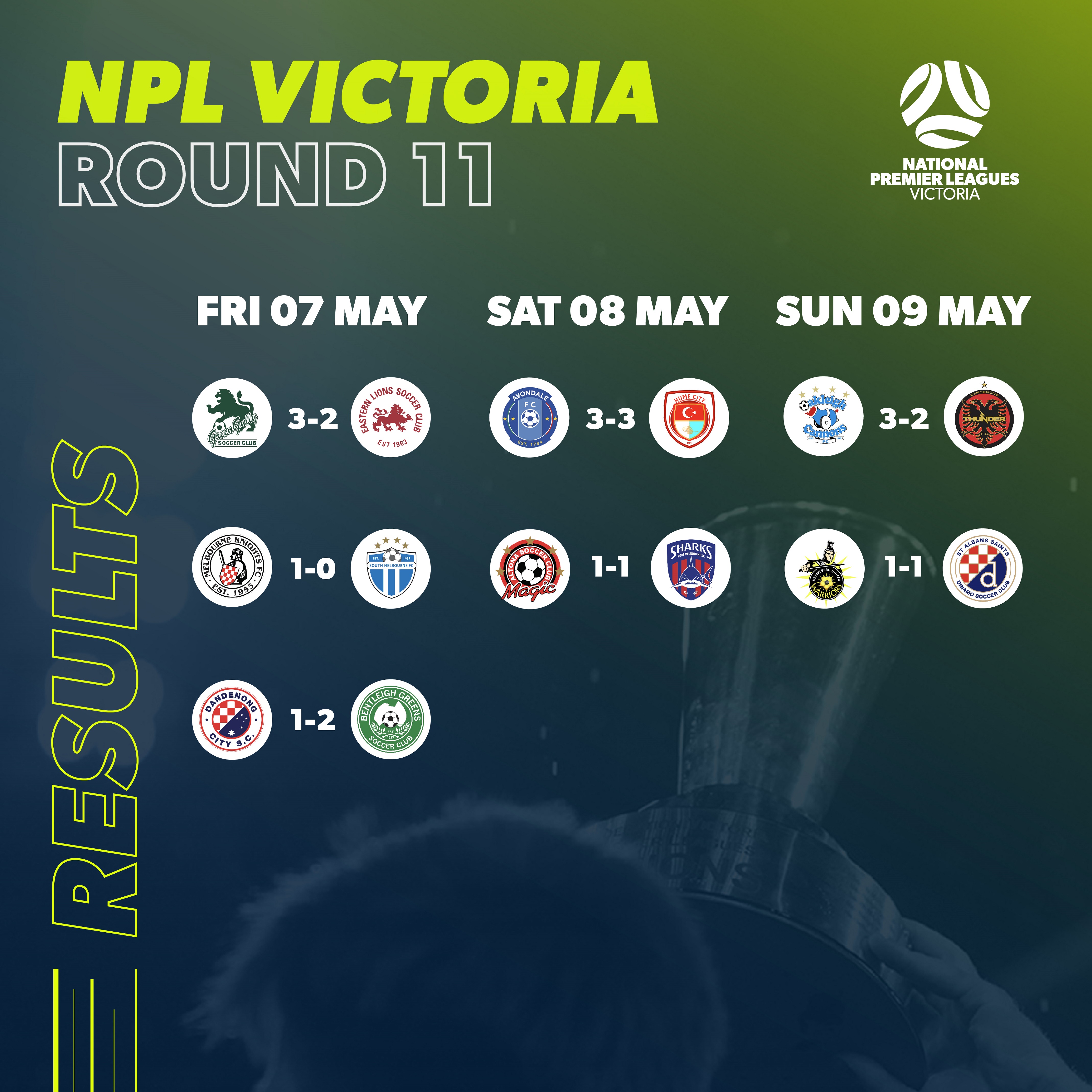 Now second, Hellas is separated from first-placed Avondale FC and third-placed Heidelberg United only by goal difference, whilst Croatia lies just a point behind and Bentleigh Greens lurks a further two back.

Even sixth-placed Oakleigh can’t be discounted as a potential premier; coach Chris Taylor’s side just four points behind the Avengers.

Welcoming South to Sunshine just days after the then-league leaders knocked them out of the FFA Cup, Knights ended up scoring the lone goal of Friday night’s rematch in the 65th minute of play.

Croatia producing a series of tidy passes to move from defence to attack through the middle of the park, the ball eventually fell at the feet of Anthony Duzel and the midfielder let loose with a driven effort that forced Pierce Clark to get down low to his right in order to keep it out.

The South keeper, however, could do nothing to prevent Dor Jok from nipping in and poking home his first-ever senior goal.

Desperately seeking to keep their copybook unsullied by defeat, South pushed hard in the remaining half an hour but, no matter how much they huff and puffed, couldn’t penetrate the guard of Tom Manos and his defence.

Avondale’s efforts to walk through the top-of-the-table door opened for them by the Knights, though, didn’t get off to the best of starts on Saturday afternoon: the Avengers falling behind against visiting Hume City after just four minutes when Andy Brennan turned in a Danny Dixon cross.

Coach Zoran Markovski’s side was able to drag it back to an equilibrium in the seventh minute when Stefan Valentini rose to head home a corner at the back post, but Hume responded and stormed to a 3-1 lead thanks to a 43rd minute Josh Bingham penalty and a 61st-minute own goal from Avondale captain Phillip Riccobene.

The 3-1 margin holding throughout the rest of regular time, Hume should have had it in the bag - only for the Avengers to strike very, very late.

First, Stefan Zinni ran onto a long ball bounced over the top of the visitor’s defensive lines and dink a ball over the head of Michael Weier to make it 3-2 in the 91st minute. Then, an almost mirror image from two minutes prior, Zinni again burst in on goal thanks to a ball over the top only to be denied by Weier.

Yet ‘Big Mike’ could do nothing to stop Brandon Lundy’s follow up shot into an open goal that rescued his side a point and top of the Victorian top-flight on goal difference.

Avondale would have been relegated back to second within a day, though, had Heidelberg United been able to secure three points against St Albans Saints on Sunday afternoon. Alas for coach George Katsakis’ side, they were unable to do so: held to a 1-1 draw by the Saints at Olympic Village.

After a goalless opening stanza, Alexander’s Takeru Okada turned in a Luka Ninkovic cross to break the deadlock, with both sides subsequently reduced to ten men when Dom Falla was sent off for the hosts after receiving his second yellow and Adam Hodor doing likewise for Dinamo.

With less than ten minutes remaining, it appeared as though the Bergers may have done just enough to secure the three points and top spot on the table, only for the debuting Jason Hart to fire in a shot that took a healthy deflection and found the net to force the spoils to be shared.

Heading to Frank Holohan Soccer Complex to take on a Dandenong City outfit still looking for their first win of the season, Bentleigh did their bit to keep the race for the top spots tight by recording 2-1 win.

Latching onto a shot from teammate Brent McGrath that had initially been deflected away, Braedyn Crowley opened the scoring for the Greens - scoring his fifth goal of the campaign in the process - in the 18th minute of play.

Crowley then turned provider in the 38th minute of play when he got on the end of a long throw-in - which’s positioning came under heavy protest from Dandy coach Saša Ogeneovski - and after losing some pressure dragged a cross back across the penalty area for Damian Iaconis to fire goalward.

Luca Slavica got one back for the hosts in the 41st minute but that was where the goals for both sides would end - Dandy City condemned to another week at the foot of the NPL Victoria table as a result.

Rounding out the play of the top six, Oakleigh welcomed Dandenong Thunder Jack Edwards Reserve on Sunday evening seeking to bounce back from a round ten defeat to Port Melbourne Sharks.

Directing a glancing header inside the far post after an inswinging Joe Guest free kick, Joe Knowles opened the scoring for Taylor’s side in the 31st minute of the contest, only for Nahuel Bonada to tie things up minutes later when he snuck a shot through the legs of new Cannon signing Aryn Williams and into the bottom corner of the net. 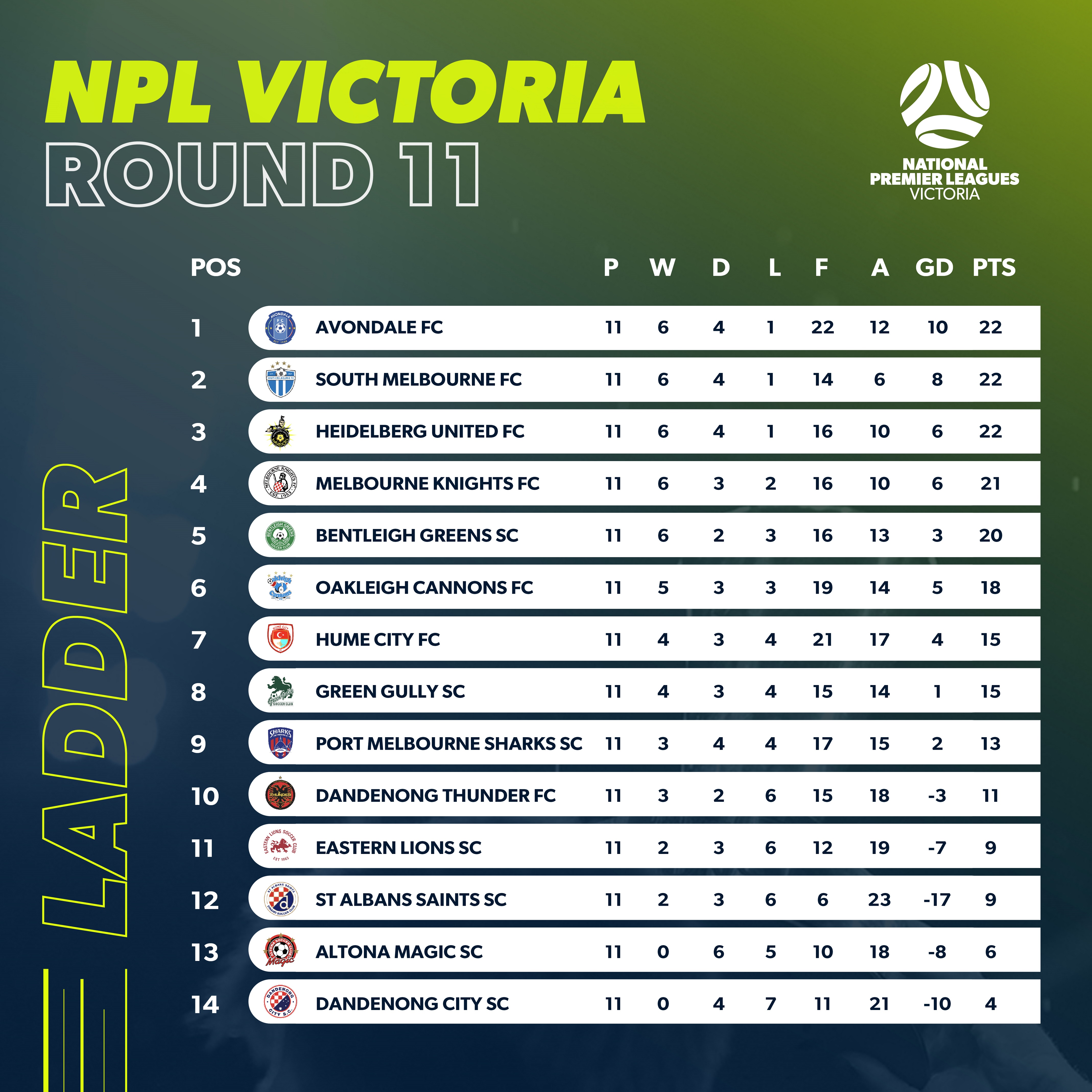 Seeking to snap a two-game losing run with a win, the Thunder pushed hard to find another as the second stanza commenced, only to fall behind 3-1 after Joe Knowles struck in the 57th minute for his second of the game and Guest fired home a penalty won after Brandon Jansz fouled Knowles in the 79th minute.

NPL Victoria’s leading goalscorer after 11 rounds, Bonada won and converted a penalty in the 84th minute to give his side some vestige of hope but it proved fleeting as the Cannons saw out the game to secure the three points with a 3-2 win.

For their part, the side that vanquished Oakleigh in round ten, Port Melbourne, travelled to Paisley Park on Saturday evening eager to ensure they wouldn’t be the side that gave the Altona Magic their first win of the season.

That task wasn’t helped, though, when youngster Jonas Markovski was found on the edge of the area by new Altona signing Ndumba Makeche with enough time to tee up an effort that was hammered an effort into the back off the net via the inside of the post.

But that lead, unfortunately for the hosts, only lasted for five minutes: John Kuol rising to meet Daniel Edwards second attempt at a cross after his first corner was cleared away and heading past Griffin Mcmaster to tie things up.

And that 1-1 margin was how the contest would end, the Magic now with no wins but six draws on the ledger in 2021 - there last win in league play coming against Kingston City on June 29, 2019.

Losing first-choice keeper Keegan Coulter in just the 18th minute of play at Green Gully Reserve, Eastern Lions backs’ were put right against the wall early on in their meeting with Green Gully; Alex Salmon sneaking a shot in at the near post to make it 1-0 just two minutes later to drive home the difficulty.

It was then 2-0 in the 42nd minute when Teeboy Kamara lofted in a cross from the left flank that was met with a driven header by Matt Fletcher.

A horror move to play out by substitute Lions keeper Anirudh Kappiyoor with just over 15 minutes to go then allowed Gully to make it three-zip after Fletcher nipped in, stole his attempted pass and shot beyond his desperate attempt to shut down the shot.

Lions’ stalwart Ziggy Razuki did his bit to make things interesting when he converted a neat little effort with his non-preffered right-foot to make it 3-1 in the 80th minute, before new signing Charlie Fry made his debut - on an individual basis at least - one to remember when he chipped Jerrad Tyson from the halfway line in the 93rd minute to make it 3-2.

There would be no Avondale-style heroics from the visitors from that point, though, as Gully held on for the points and stayed within a win of the top six.