Reflective of the heavily congested nature of the NPL Victoria table, Round 20 of the Victorian top-flight was a heavily contested one: three of the round’s seven games ending in stalemates and a further two decided by just a single goal.

And when the dust settled on the weekend’s action, fifth through fifth found themselves separated by just a three-point gap, while the margin between second and fourth position on the ladder was just one.

Taking the field after the passing of club founder Henry “Harry” Moakes OAM, Green Gully opened the round against South Melbourne and struck quickly: taking the lead in just the fourth minute at Lakeside Stadium. 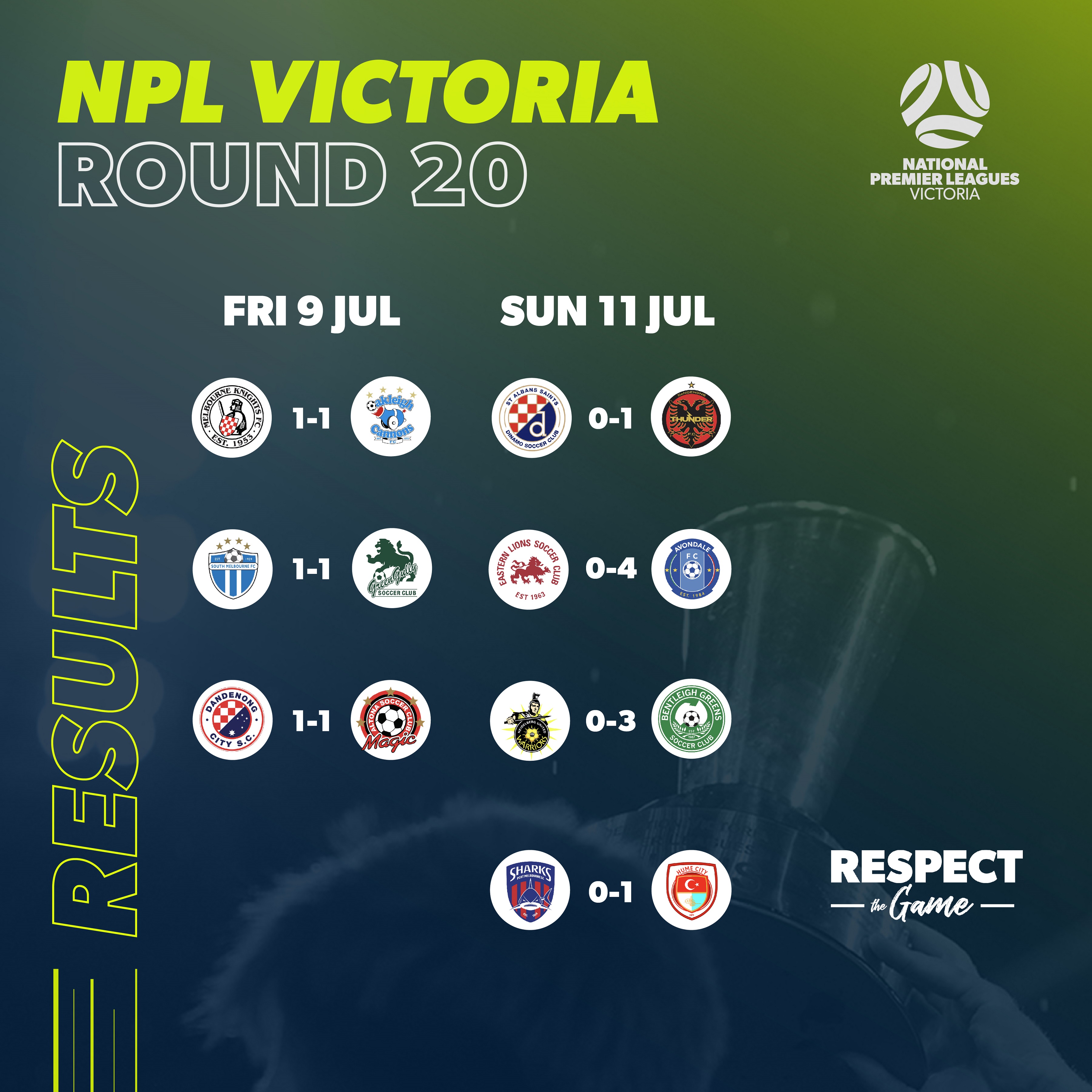 Swinging a corner in from the left, Jay Davies served as the provider for the deadlock breaker when he found the head of Caio De Godoy; the defender promptly heading the ball into the top corner of the net.

Getting onto the end of a Daniel Clarke free-kick, Brad Norton almost squared things up in the 13th when he sent a header of his own towards the top corner of the net, only for Gully keeper Jerrad Tyson to produce a miraculous diving save to keep it out.

Duelling chances would then follow before Hellas finally made the breakthrough and brought it back to 1-1 in the 63rd minute when referee Daniel Ilievski spied a handball by Davies inside the Gully penalty area and Marco Jankovic hammered home the resulting penalty.

Gully’s Alex Salmon put a header over the bar and Clarke had an effort rattle off the crossbar as both sides pushed to find an elusive winner but both would end up frustrated at the end of the 90 minutes: the spoils shared by the combatants at Albert Park.

While the point ensured that South, at least, remained within touching distance of the league’s top six in ninth, time is beginning to run out for Gully to mount an assault on the final’s places may be rapidly running out -- coach Stephen Downes’ side six points back of sixth-placed Port Melbourne Sharks.

Of course, for their part, the Sharks were unable to capitalise on momentum born from their mid-week progression through to the national stages of the FFA Cup in their Sunday evening game: going down 1-0 to fellow FFA Cup Round of 32 participants Hume City at JL Murphy Reserve.

Seeking to continue his remarkable streak of league games with a goal, Josh Bingham had an early chance to put Hume ahead when he got to a ball whipped in towards the near post and flicked it goalward in the third minute, only to be denied by a sharp save from keeper Andrew Withers.

Andy Brennan was then unable to turn in a Danny Dixon cross to give the visitors the lead in the 22nd minute, before, up the other end, George Mells had his attempt to give his side the lead from a free-kick crash off an assembled Hume wall.

It was Brennan, though, that would eventually make the breakthrough for his side in the 33rd frame; first on the scene to pounce after Withers sent a Bingham shot back into play and heading the ball into an open net.

Seizing upon Hume’s failed attempt to clear a Valentin Cesnik cross, Lathan Dunn had a golden opportunity to equalise in the 79th minute, only for his shot from the top of the six-yard box to be desperately blocked away. Michael Weier then comfortably collected Mells follow-up effort to snuff out the danger.

And in the end, coach Nick Hegarty’s side was able to hold on to secure the win; results elsewhere meaning the Sharks clung onto their place in the top-six while Hume moved to within a point of second-placed Oakleigh Cannons.

That tightening on the table was made possible thanks to the Cannons being forced to settle for a frustrating 1-1 draw with Melbourne Knights out in Sunshine on Friday night.

Looking for his ninth goal of the season, Joe Knowles had a shot from outside the area deflected away for a corner in the 43rd minute, before Adam Thomas had a free header off a Joe Guest free-kick comfortably saved by Tom Manos two minutes later.

Cutting inside from the left and working to find an angle in on goal, Gian Albano eventually forced a smart save from Cannon keeper Nick Feely within seconds of the second half resuming, but it proved a false dawn for the Knights.

As after failing in his initial attempt to boot clear a Cannon move into his side’s penalty area, Trevor Ssemakula brought down Joe Guest as he sought to capitalise and move in on goal in the 53rd: the Englishman converting the resulting spot-kick for his fourth goal of the season and to give his side a 1-0 lead.

Yet, despite being confronted with a wall of blue shirts in front of him, James McGarry was able to set the Knights up for the equaliser ten minutes later; somehow threading a ball through into the path of Mohammed Sumaoro at the edge of the Cannon six-yard box that the former Adelaide Raider fired home.

The Knights absolutely should have taken the lead in the 74th minute when Feely spilled a Ssemakula cross into the path of Dor Jok just a meter out from goal. The Knights’ youngster, though, fluffed his lines at the vital moment: failing to make proper contact with the ball and allowing the Cannons to desperately scramble the ball clear.

Handed a reprieve, coach Chris Taylor’s side had a chance to win it late themselves when Guest dinked a ball over the top of the Knights’ defence and into the path of Chris Lucas, only for his resulting shot to be well saved by Manos.

Manos’ efforts ensured that his side remained in seventh place and a point clear of Dandenong Thunder, who continued their impressive charge towards the top-six with a 1-0 win over St Albans Saints at Churchill Reserve on Sunday afternoon.

His team undefeated in their last five heading into the contest, Hamish Watson flashed early warnings for the hosts in the tenth minute of play when he headed an Ali Sulemani cross over the bar and three minutes later when he sent a cross just across the face of keeper Shane Viitakangas’ goal.

The big Kiwi subsequently followed through on his warnings in the 17th minute when he rose to meet a ball skied in a goalmouth scramble and head beyond Viitakangas for the opening goal of the game.

Diving to meet a Joey Monek ball whipped into the area, Jason Hart had the Saints first clear cut chance of the game in the 28th minute, only for his effort to comfortably nestle in the arms of Thunder custodian Francis Soale.

Watson could have had his second up the other end moments later but blasted his one-on-one effort directly at Viitakangas. St Albans’ Chris Dib then sent a headed effort from a Jungho Kim free-kick over the bar.

Collecting Soale’s punching clearance in the 70th frame, Bradley Murray had the chance to register his first goal of the season and tie things up by shooting into a relatively open goal but, alas for Dinamo, could only blast an effort high and wide.

It would prove to be the host’s last good chance of the game, as the Thunder, who continued to pepper the goals looking for a second that wasn’t to be, eventually took the three points back to the Southeast.

The lack of points, unfortunately for coach Kruni Razov’s side, also consigned them to the bottom of the NPL Victoria table after Dandenong City and Altona Magic’s dramatic 1-1 draw out at Frank Holohan Soccer Complex on Friday night.

Having had the better of the chances throughout the opening stanza, the Magic took the lead in the battle of the cellar dwellers on the stroke of halftime when John Stojcevski floated a ball into the area for a Jonas Markovski header than bounced off the palms of Hajduk keeper Jasmin Keranovic and into the back of the net.

Bursting through early on in the second half, City’s Delarno Pharoe thought he’d tied things up when he poked an effort beyond onrushing Magic keeper Stefan King and towards goal -- only for his effort to be cleared off the line at the last.

Bradie Smith then found the head of Pharoe in the 71st minute but King proved up to the task once again as he got down low to deny the Dandy attacker the equaliser with his headed effort.

With regulation ending with the score remaining 1-0, it appeared as though the Magic were set to take a vital three points back to Altona.

But cometh the hour, cometh the man: Hajduk veteran Nick Kalmar working himself into a bit of space in the 91st minute and letting loose with a long-range effort that King could only spill into his own net to ensure the spoils would be divided equally.

The point for the Magic and City leaves the pair four adrift of eleventh placed Eastern Lions, who went down 4-0 to increasingly runaway league leaders Avondale FC on Sunday afternoon.

Dancing around a series of challenges, Stefan Valentini set Kristian Trajceski up to open the scoring in just the ninth minute of play, only for the heavily favoured Avengers to then be forced into a series of rearguard actions to defend their newfound lead.

Charlie Fry went the closest for the Lions in the 20th minute when a corner fell to him at the back post, his resulting header back on goal forcing Rory Brian into an acrobatic save to keep keep the score 1-0.

It took until the 51st minute for Avondale to eventually make it 2-0: Joey Katebian slicing a pass through the Lions’ lines for Valentini to run onto and slide past Keegan Coulter to double his side’s advantage.

Coach Daniel Puşcaşu’s side once again was able to tighten up and prevent the goal from turning into a flood, but captain Shaun Kenny’s well-earned 80th-minute red card left them exposed and allowed their foes to finish with a wet sail.

Valentini capitalised on some superb work from Yitay Towns on the left flank by collecting his effort off the crossbar and making it 3-0 in the 83rd minute and Katebian grabbed Coulter’s save of his first shot and made no mistake with his second bite of the cherry in making it 4-0 in the 91st.

Undefeated since March 13, the win gives Avondale a seven-point buffer over second-placed Oakleigh and an eight-point one with third- and fourth-placed Hume and Bentleigh Greens -- the latter of whom moved back into third with a 3-0 win over Heidelberg United on Sunday afternoon.

After both sides announced their intentions to the other with a string of early chances, Mitch Hore put the Greens ahead in the 35th minute when he got to a Pierce Waring cross at the back post and fired in after his first shot was saved by Chris Theodoridis.

After surviving a series of strong Alexander chances at the start of the second half, the Greens made it 2-0 in the 57th minute when Waring was played through and made no mistake in massaging a shot past the on-rushing Theodoridis and into the net.

Frustrated at being down despite their strong play, the Bergers almost halved the deficit on the hour mark when a long throw-in from Ruben Way was met by Sean Ellis, only for the Scot’s effort to go wide.

Collecting a ball into the area from Hore, Braedyn Crowley was brought down to win a penalty for his side in the 81st minute -- one that was duly dispatched by Waring to make it three. 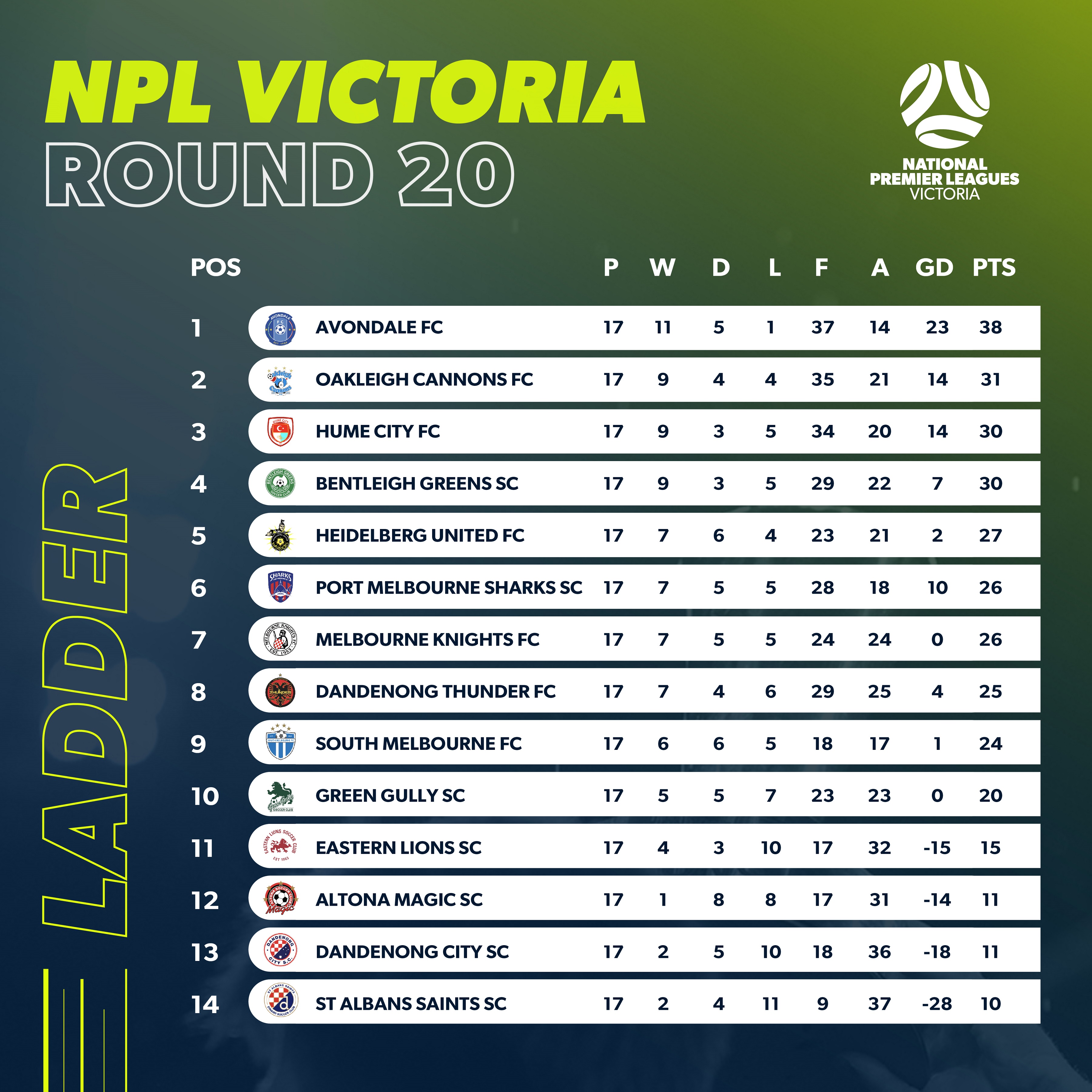