We hope you like goals because the past weekend of action from the Victorian top flight was full of them; an astonishing 32 goals scored across NPL Victoria’s seven games with an average margin of victory of 3.6.

Though a number of enticing encounters were played out across the state, the match of the round took place out at the Reggio Calabria Club on Saturday afternoon; top-of-the-tree Avondale FC welcomed second-placed Bentleigh Greens to Avenger Park. 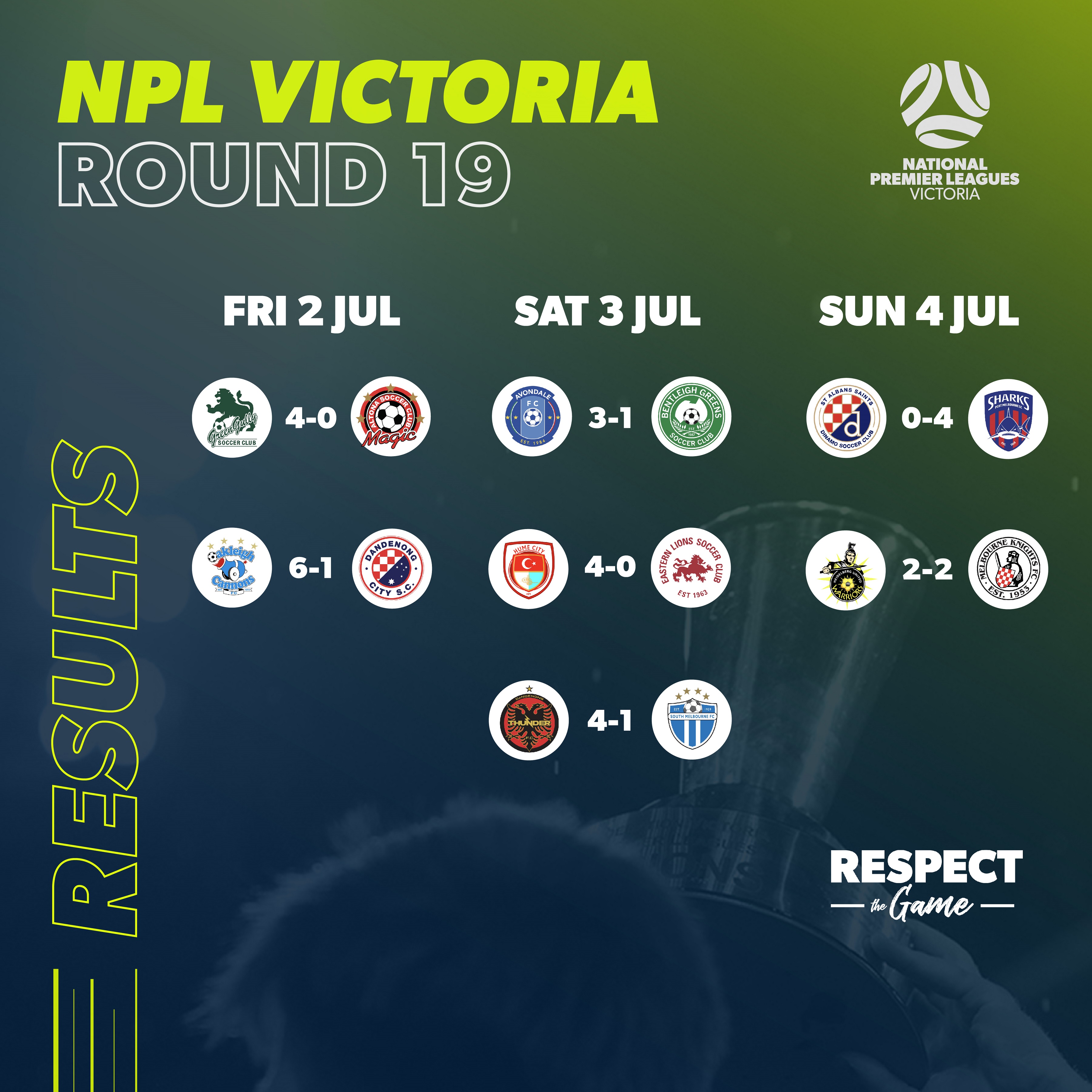 Mitchell Hore flashing early warning signs from the Greens when he forced Rory Brian into an acrobatic diving save in the tenth minute of play, coach Nick Tolios’ side soon took the lead in the 15th minute after a disasterclass in defensive communication between Blake Carpenter and Brian enabled Braedyn Crowley to nip in, steal the ball and finish into an empty net to make it 1-0.

Said parity, however, only lasted a few minutes, as Valentini promptly bagged a quickfire brace when he collected the ball on the left, drove to the inside of defender Jack Webster and hammering a shot into the net in the 52nd frame.

Played in on goal by James Xydias in the 82nd minute, Kieran Dover had a golden opportunity to drag the game back for his Greens but could only drag his effort across the face of goal and wide.

The visitors were then punished when Joey Katebian stole a haphazard attempt to pass out from his box from Lopez and fed the ball to Yusuf Ahmed, who quickly rounded the Greens custodian and fired into the goal to make it 3-1.

Their lead atop the Victorian top-flight stretched to five points with the win, the Avengers will look to continue the momentum when they clash with NPL2 side Pascoe Vale on Tuesday night with a spot in the FFA Cup Round of 32 and Dockerty Cup semifinals on the line.

For the Greens, previously knocked out of the Cup by Hume City, the result sees them slip down to fifth on the incredibly congested NPL Victoria table -- replaced in second by the red-hod Oakleigh Cannons.

Indeed, winners of four of their last five, the Cannons were one of the form sides of the competition heading into their Friday night contest with Dandenong City at Jack Edwards Reserve and, after being stung into life by an early goal from Hajduk’s Brayden Mann, fired on their way to a 6-1 win.

Looking to respond after Mann ran onto a long ball out from keeper Jasmin Keranovic and hammered home in just the third minute, the hosts brought it back to 1-1 just six minutes later when Chris Lucas seized upon Keranovic’s parry of a Joe Guest shot and fired home.

Coach Chris Taylor’s side then took the lead in the 27th minute when a Guest free-kick was swung into the penalty area and met with a booming header from Adam Thomas. It was soon 3-1 when Lucas forced a turnover deep in City’s half, burst forward and slid a ball across to Guest for an easy finish into an open goal in the 40th.

After his side was denied a penalty shout, Joe Knowles delivery onto the head of Lucas made it 4-1 in the 43rd minute and it was five in the 75th when Wade Decker was able to dig the ball out from under his feet in the penalty area and slide the ball across for Lucas’ hattrick.

Turning in a Knowles corner at the near post in the 78th minute, Decker completed the rout for the Cannons -- sending them into second on the table and giving them a six-pack of reasons to be optimistic heading into their FFA Cup game against South Melbourne.

For Hajduk, despite two wins in their last five games, they remain rooted to the second-bottom position of the NPL Victoria table; only St Albans reaching deeper depths of futility than the side from Frank Holohan Soccer Complex this year.

Out in Melbourne’s Northwest, City’s fellow strugglers Altona Magic gave a good account of themselves in Friday night’s other contest, only to a 4-0 defeat at the hands of Green Gully.

Stealing the ball off Daniel Jones, Jon Mcshane had a chance to give the Magic a tenth-minute lead when he bore down on the goal of Jerrad Tyson, only for the big number nine to put his subsequent effort wide of the far post.

Had the big Scot been able to drag his effort back on goal, who knows where the game may have ended up, as Altona gave a good account of themselves out at Green Gully Reserve. Nonetheless, they fell behind when Alex Salmon converted a penalty won by Jay Davies in the dying stages of the half.

Nicholas Sette had a magnificent chance to get Altona on the scoresheet when he was played in on goal by a cheeky no-look pass from Jonas Markovski early in the second, only for Tyson to get enough of a touch on his resulting shot to allow defenders to get back and scramble the ball off the line.

McShane then drove a thunderous, long-range free kick in on goal, only for it to crash off the junction of post and crossbar and bounce back into play in the 54th minute.

But when Mamadi Kamara nipped in to steal an attempted header back to keeper Stefan King by Troy Ruthven and made it 2-0 on the hour mark and Alex Salmon made it 3-0 from the penalty spot again in the 65th, the wind appeared to have gone out of Altona’s sails.

Salmon promptly grabbed his hattrick with a curling, dipping, peach of a long-range effort in the 70th minute, a bow was put on another frustrating night for the Magic; the club still with just a single win to their name in 2021.

On Saturday evening, Hume City continued their fine run of form and moved into third place on the table after staging a second-half blitz to beat Eastern Lions 4-0 out at ABD Stadium.

Switching to a back-five in an attempt to frustrate their free-scoring foes, the Lions -- despite losing Ryan Losty to an early injury -- did an admirable job of restricting the host’s looks on goal in the opening stanza; lethal Hume hitman Josh Bingham restricted to half chances that keeper Anirudh Kappiyoor was able to snuff out.

But the dam eventually just broke moments into the second stanza; a long ball over the top for Danny Dixon enabling the former Melbourne Knight and Northcote man to fire inside Kappiyoor’s near post to make it 1-0.

Getting in behind central defender Charlie Fry, Andy Brennan slide a pass across the face of goal for Dixon to stab home in the 52nd minute to make it 2-0, and some fine build-up play from Brennan and Mitch Cooper then set Dixon up for a close-range finish, his hattrick and a 3-0 lead for the hosts in the 67th minute.

Extending his streak of league games with a goal to ten, Bingham then sealed the second-half demolition with a goal of his own in the 79th minute when he was picked out by a delightfully deft chip from Mark Ochieng and headed in from close-range.

Hume’s attention will now turn to Wednesday night, where they will seek to avoid the banana peel that is State League 2 side Monbulk Rangers in their quest to return to the Round of 32 of the FFA Cup.

Elsewhere on Saturday night, four goals were also on the agenda in Melbourne’s Southeast: Dandenong Thunder putting freefalling South Melbourne to the sword in recording a 4-1 win at George Andrews Reserve.

After Nahuel Bonada forced a strong save from Hellas keeper Pierce Clark after a long-range free kick in the 14th minute of play, the hosts took the lead from the resulting corner thanks to a booming header from Tomas Maricic.

South’s inability to defend corner kicks then haunted them again on the half an hour mark when a corner into the near post managed to dribble its way across the face of the goal and, after a dogged battle, be put just over the line by Hamish Watson before it was booted away.

Liram Elmazi’s smart finish from a scramble after a South corner three minutes past the hour mark gave the visitors some semblance of hope, only for that faint flicker to be extinguished when Bonada turned Luke Adams, brought the ball into the penalty area and fired a shot beyond Clarke in the 74th minute.

The game was then well and truly killed off three minutes later when Young Socceroo prospect Mersim Memeti dinked a free kick in towards the back post that was fired home by Joshua Meaker.

Seeking to keep pace with the Cannons and hold off Hume, Heidelberg United welcomed Melbourne Knights to town in a battle of former NSL sides on Sunday afternoon.

Mid-season Alexander signing John Roberts failing to pull the trigger on a shot after driving into the Knights’ penalty area in the 8th minute of play, Caleb Mikulic unable to get a shot past Chris Theodoridis in the 12th minute, Sean Ellis putting a free-kick over the bar in the 15th, and Gian Albano flashing a shot wide in the 23rd, proceedings were furious in the early stages of the contest -- but neither side was able to find a goal.

Ultimately, it took until the second half for the first blood to be drawn between the two: Mohammed Sumaoro played in on goal by James McGarry and firing an angled effort past Theodoridis in the 57th frame.

The Bergers, however, fired right back to restore parity a minute later when a picture-perfect ball in from Josh Wilkins was turned in by Luka Ninkovic.

Picked out by Anthony Duzel at the top of the area as his side broke, Albano thought he’d done enough to win it for Croatia when he drove a ball beyond Theodoridis and into the bottom corner of the net with just eleven minutes to go.

But given Knights’ season thus far, viewers perhaps should have anticipated more late drama, and on this occasion, it was Cardiac Croatia that was on the wrong end of it.

The Bergers twice heading an Adrian Zahra free-kick onwards in the 92nd minute of play, the ball eventually found its way to the right boot of Josh Wilkins, with the right-back’s subsequent effort wrong-footing keeper Tom Manos and securing his side an important point.

Dropping two points late, the result saw coach Steve Bebic’s side fall out of the top-six -- replaced by one of the other two sides in action on Sunday.

Spotting Shane Viitakangas off his line in the eighth minute of play, Port Melbourne’s Lathan Dunn launched an audacious chip over the top of the Saints’ keeper from the halfway line to open the scoring at Churchill Reserve -- backflipping away in celebration of his second goal of the campaign.

Seizing upon the aftermath of Viitakangas deflecting away a Dunn shot, Jackson Courtney-Perkins shot into an open net to make it 2-0 to the visitors in the 40th minute, and the margin was stretched to three moments before halftime when the Sharks forced a turnover, strode forward and Kris Kioussis fired in from the edge of the area.

Easy as you like, coach Adam Piddick’s side then made it 4-0 with 15 minutes to go when Omar Ammache slid a ball in towards the back post, Dunn let it run and Valentin Cesnik fired into an open net.

Set to stage a 2018 re-match with Moreland Zebras in the seventh round of FFA Cup preliminary qualifying on Wednesday evening, the Sharks moved into the finals’ spots for the first time this season with the win, while the Saints remain rooted to the bottom of the table.