A week after its behind-closed-doors return, fans were on the fences and back in the stands at community and NPL grounds across Victoria this week, with Victoria’s men’s top-flight welcoming them back with big goals, big upsets and big finishes.

Seeking to keep pace with the top-of-the-table Avondale FC, second-placed Bentleigh Greens welcomed Hume City down to Kingston Heath Soccer Complex on the opening night of the round but, safe to say, things didn’t go to plan for coach Nick Tolios’ side.

After Braedyn Crowley failed to punish the visitors following a poor turnover from Mitch Cooper in the 27th frame, the Greens found themselves down a goal eleven minutes later when Hume forced a turnover before quickly getting the ball to attacker Josh Bingham in space. 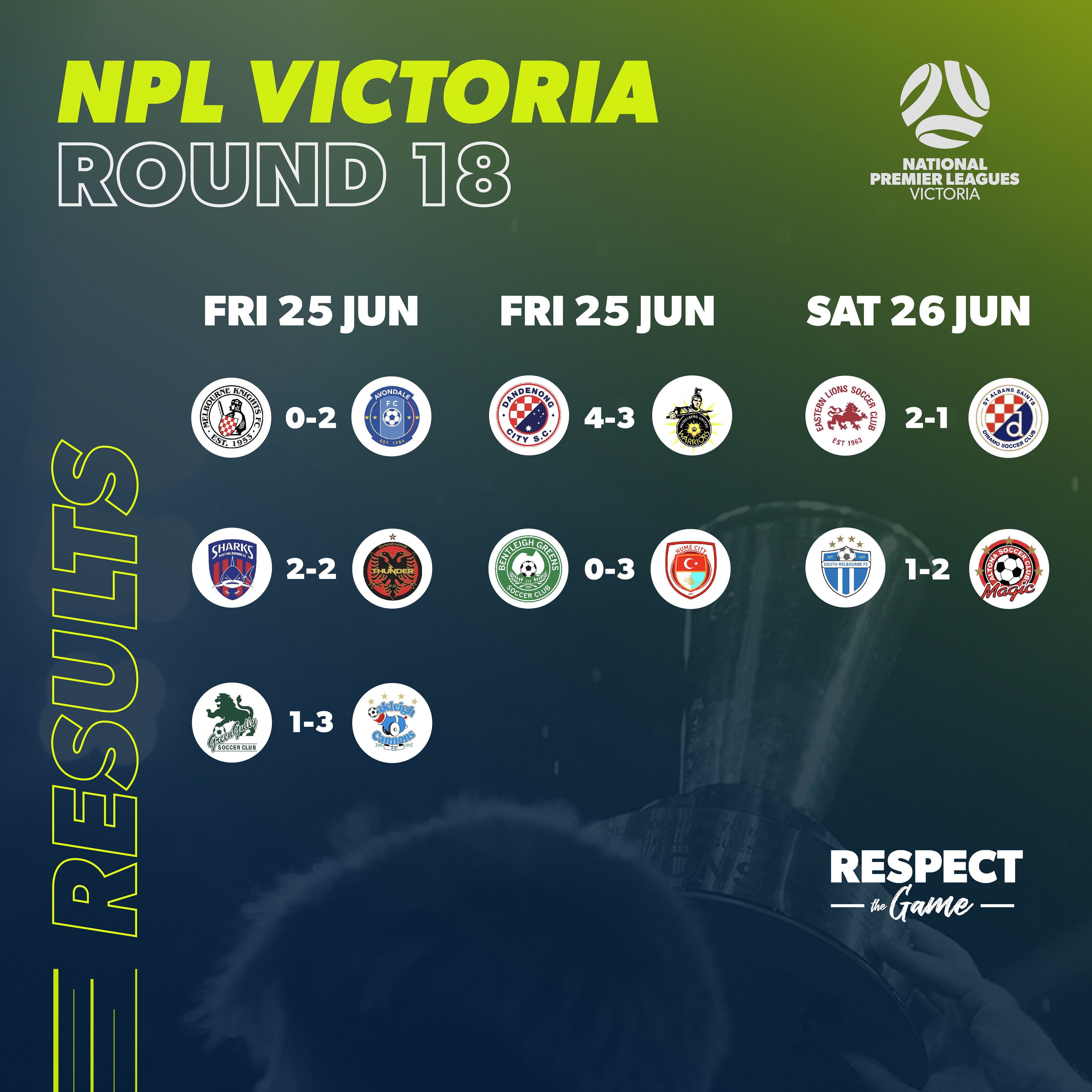 The one-time Central Coast Mariner made no mistake with his subsequent chance as he drove into the area and sent a wicked shot inside keeper Javier Lopez’s near post to make it 1-0.

Forcing another turnover, coach Nick Hegerty’s side then made it 2-0 in the 59th minute when a long-ball over the top found Danny Dixon in acres of space on the left flank; the Englishman promptly dancing into the Greens’ area and sending in an effort that, despite defender Jacob Alexander getting a touch on it, nestled in the back of the net.

Kieran Dover forced Hume keeper Michael Weier into a sharp save in the 63rd minute to give the Greens some level of hope, only for Hume to kill it off not 60 seconds later when they again got out quickly: Dixon working the ball across to Bingham to again fire past Lopez for his second of the evening and league-leading 12th of the 2021 campaign.

An errant backwards header from Umut Bozdugan gifted the Greens’ a chance to drag one back in the 70th minute, but Chudiar Tharjiath couldn’t find the target. Theo Markelis then could have made it four for Hume in the 87th minute, only for his shot to be cleared off the line.

Combined with Oakleigh Cannons win over Green Gully, the 3-0 loss saw the Greens fall to third on the NPL Victoria table heading out of the round, while Hume moved from eighth to fifth with the important three points.

It took just under thirty minutes for the Cannons to take the lead out at Green Gully Reserve in their Friday night match: the home side going down in rather unfortunate fashion when a cross careened off the post, hit defender Jordan Hall square in the face and rebounded into the back of the net just on the half-hour mark.

Coach Chris Taylor’s side’s task had been made easier five minutes earlier when Chirs Lucas was dragged down by Caio De Godoy as he broke in goal -- earning the Gully defender his immediate marching orders from referee Andrew Meimarakis.

Though his first effort on goal was blocked by Jerrad Tyson after he’d been played through by Ryan Paczkowski, Joe Knowles then doubled his side’s advantage in the 31st minute when he got to that loose ball and fired into an empty net.

The Cannons blew a chance to make it three in the 58th minute when they were awarded a penalty after Jeremy Walker was adjudged to have used his arm to clear an effort off the line -- earning his marching orders and reducing Gully to nine men -- only for Knowles to step up and blast it into the crossbar.

Marching up the other end, Gully was then awarded a penalty of their own a minute later when Aryn Williams crashed into Alex Salmon on the edge of the penalty area, with the Gully striker promptly stepping up and placing it in the bottom corner of the net.

But there would be no unlikely comeback for coach Stephen Downes’ side after their failure to clear a high corner lofted into the area allowed Matthew Thurtell to pounce on a loose ball and make it 3-1 in the 71st minute.

Not only did the three points earned allow the Cannons to overhaul the Greens but it also saw them clear Heidelberg United after coach George Katsakis’ side suffered an upset 4-3 loss at Dandenong City.

Played in on goal by Bradie Smith, Cameron Teece opened the scoring for Hajduk in just the third minute of that Friday evening contest at Frank Holohan Soccer Complex, and Brayden Mann doubled the Dandy delight when a series of calamitous defensive errors from the Bergers allowed Teece to pick him out with a short-range cutback.

Alexander was able to drag the deficit back to one when Luke Burgess won a penalty promptly sent home by Dusan Bosnjak in the 41st minute, only to themselves immediately give up a penalty that was cooly dispatched by Nick Kalmar up the other end a minute later.

Things then went from bad to worse for the side in yellow and black 12 minutes into the second half when Gavin De Niese lifted a cross in towards the far post that was headed home by Jacob Brito to make it 4-1 for the side that entered the contest bottom of the league with just a single win.

John Roberts sent in a magnificent outside of the boot cross that was headed home by Luka Ninkovic in the 91st and Josh Wilkins drilled a shot across the face of goal and inside the far post in the 94th minute to cut the deficit to one but the damage had been done: Dandy moving off the bottom of the table and Heidelberg falling to fourth.

That the Bergers didn’t fall any further than that was due to the Victorian top-flight’s other major upset of the weekend: Altona Magic securing their first win of the season by downing South Melbourne 2-1 at Lakeside Stadium on Saturday evening.

Breaking quickly after the Magic’s Stefan Ristic had a goal disallowed for offside in the 34th minute, Hellas opened the scoring after their move transition worked the ball to Daniel Clarke in a bit of space, with the attacker then cutting onto his left foot and firing inside post of Stefan King to make it 1-0.

That lead, however, only lasted two minutes; the Magic restoring parity when South’s attempts to clear a cross fell directly at the feet of Dimitri Hatzimouratis within enough time and space to pick out the bottom corner of the net.

The Magic then took the lead five minutes into the second half when Jon McShane was clipped by Lirim Elmazi as the two battled for the ball at the top of the area -- referee Bruno D'Aniello immediately pointing for the spot.

Having won the penalty, the big man made no mistake with his attempt to convert it: driving his shot low and into the bottom left-hand corner to make it 2-1 to the Magic.

And that is how it would end, with the Magic securing their first three points of the season and moving out of the relegation zone and South, for the first time this season, falling out of the top six.

South’s loss meant that their old foes Melbourne Knights were able to, just, retain their place in the finals’ places despite going down 2-0 to league-leaders Avondale FC on Friday night.

Neither side able to forge much in the way of clear, decisive challenges on the sodden Knights Stadium surface -- a long-range effort from Stefan Valentini the best of the opening stanza’s half chances -- it took until the hour mark for the Avengers to take the lead.

Looking up near the byline after his side had kept the Knights’ boxed into their own half, winger Stefan Zinni laced a perfectly weighted cut back to the top of the area that Yitay Towns drove inside the right-hand post to make it 1-0.

With regulation time over, second-half substitutes Joey Katebian and Yusuf Ahmed then combined to double Avondale’s advantage by springing the former into a one-on-one battle with Knights’ Tom Manos that he cooly won: firing into the bottom corner of the net before being mobbed by teammates near the corner flag.

Down the other end of the table, Dandy City was replaced at the foot of the NPL Victoria table by St Albans Saints, who fell to a late 2-1 defeat at the hands of Eastern Lions on Saturday afternoon at Gardiners Creek Reserve.

After an opening half largely devoid of notable chances, Jungho Kim had the game’s first real effort on goal in injury time of the first stanza when he sent in a long-range shot that was blocked away by Lions’ keeper Anirudh Kappiyoor.

Kim then had another chance moments later as the hosts failed to clear, only for his effort to be blocked away.

Breaking down the right, Denis Daluri eventually set up the breakthrough when he drove a low cross across the penalty area that was met by an unmarked Ziggy Razuki at the far post to drive home.

But the lead wasn’t long to last, after the recently introduced Sime Brzoja drove into the Lions’ penalty area for his Saints and was brought down by Charlie Fry to win a penalty that was converted by Joey Monek.

Regulation time ending with scores still locked at a goal apiece, it appeared as though the two sides were set to be forced to share the spoils in Melbourne’s east -- only for second-half substitute Aaron Fabris to come to the fore.

Arriving late to get to the front of a big pack that had formed at the near post to meet an Andrew Le Page corner, the former Lions junior sent a glancing header beyond keeper Hayden Browne and into the back of the net to win it for his side.

In the weekend’s final contest, both Port Melbourne Sharks and Dandenong Thunder stayed in touch with the top-six race after playing out a hard-fought draw at JL Murphy Reserve.

After exchanging near misses on both ends -- the Thunder’s Hamish Watson hitting the post in the 41st minute -- the visitors eventually took the lead in the 54th minute of the contest when they broke quickly and an eventual cross from Nahuel Bonada found its way to Watson and the back post to be fired home.

Dancing around Thunder challenges to get to shooting range the edge of their penalty area, Valli Cesnik drove a fine shot into the bottom corner of Francis Soale’s goal to equalise in the 66th frame, only for Bonada to restore his side’s lead with a penalty five minutes later.

A rash challenge from Port’s Chris Duggan earned him his marching orders in the 90th minute in what appeared to be a fatal blow to his side’s hopes for a comeback.

But with seconds remaining, John Kuol, forced to the byline by the Thunder defence, whipped in a cross that was met with a falling volley by Jackson Courtney-Perkins that buried itself in the back of the net and ensured the scores ended locked at 2-2. 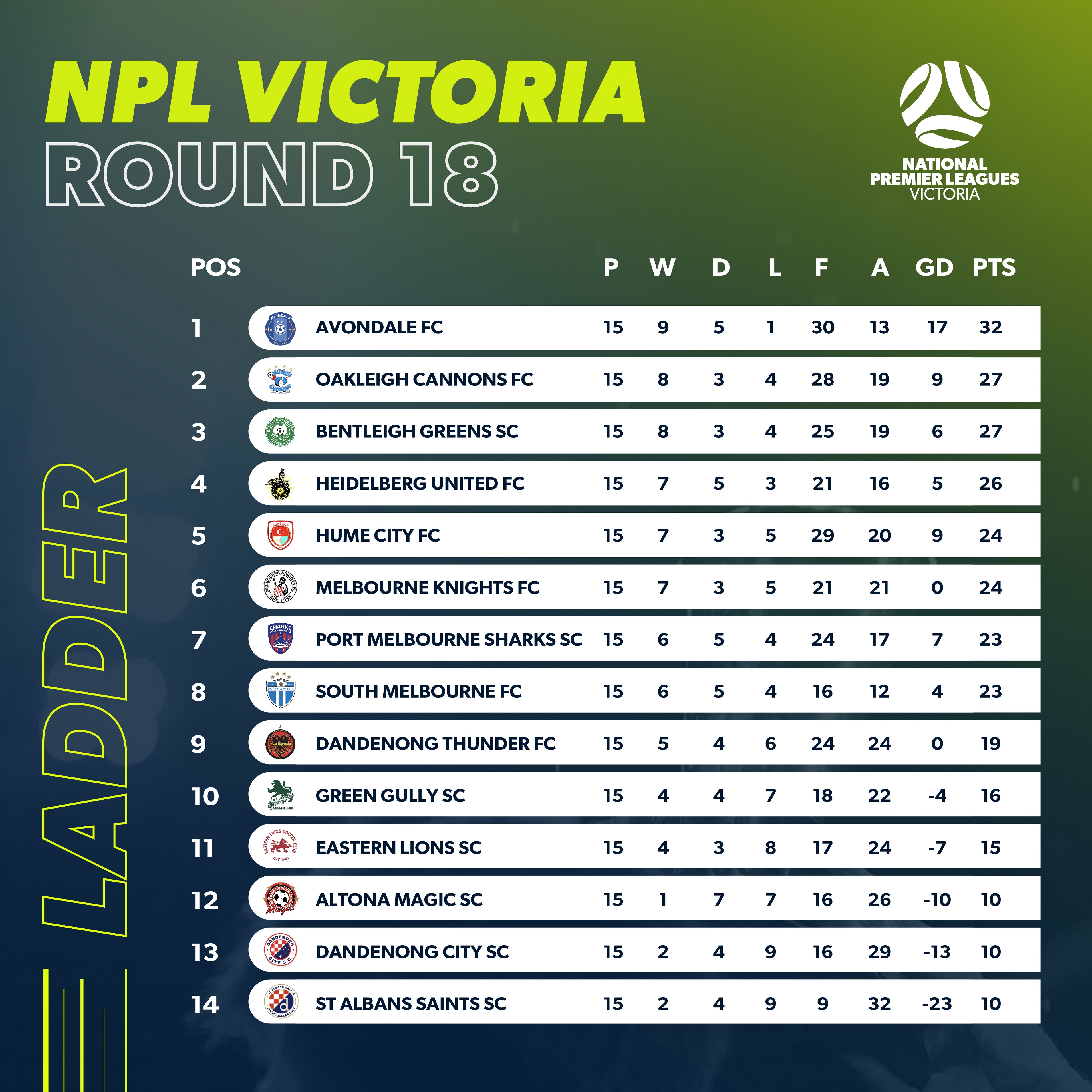