The first half of the 2021 NPL Victoria season is in the books and while many questions remain, one thing is certain after every side has played each other once: the battle for Victorian supremacy is very, very tight.

Only Avondale and Bentleigh Greens have escaped defeat in their last five hitouts, while no side currently possesses a winning streak longer than two games.

Things, it appears, are set to get spicy across the back end of the season. 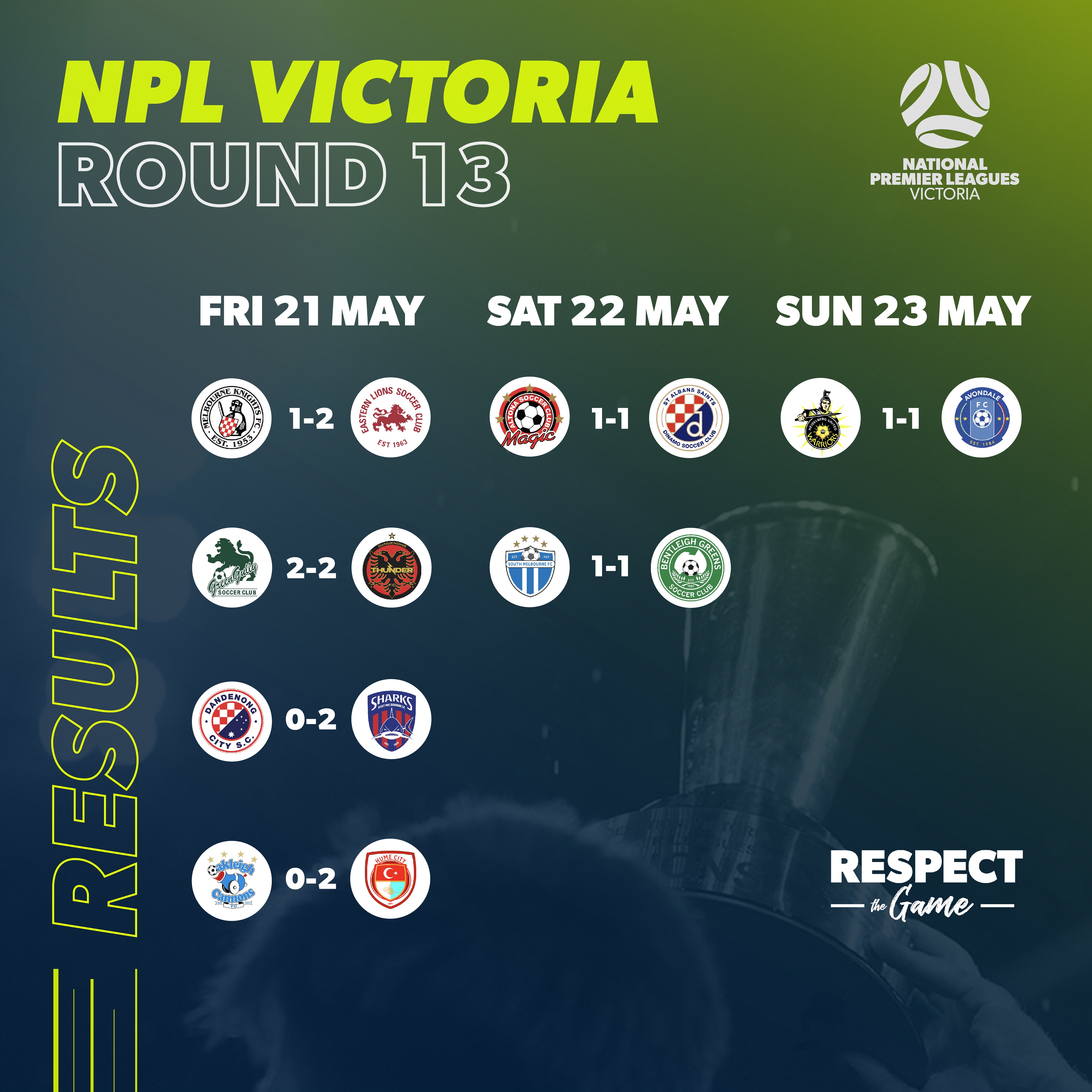 For the second week in a row, meetings between the sides that have consistently found themselves in the playoff places highlighted round 13’s action: league-leading Avondale travelling to Olympic Village to take on Heidelberg United and Bentleigh heading to Albert Park to face South Melbourne.

Seeking to extend the two-point gap between themselves and the second-placed Greens, Avondale grabbed a 1-0 lead just before the main break of their contest with Alexander when Dillon Jakupi was played through into space on his attacking right-flank in the 39th minute.

Cutting inside, he then squared a pass intended for Liam Boland across the face of goal, only for the Avondale spearhead to go down under a heavy challenge from defender Mallan Roberts. Stefan Zinni, however, was there to clean up the mess and he jumped on the loose ball and fired home - wheeling away in celebration as Boland remained on the turf holding his knee.

Eager to avoid their second defeat on the bounce, the Bergers weathered an early spell of pressure from the visitors to begin the second stanza before taking advantage of a disastrous error from Avengers keeper Rory Brian to make it 1-1 in the 68th minute.

Seeking to collect a wayward header back from defender Brandon Lundy, the Avondale custodian dove to attempt the ball from going out for a corner but, in doing so, left the ball completely exposed to attacker Adrian Zahra.

Stealing the ball, the 30-year-old made no mistake with it as he moved inside, carried the ball towards the goal and finished into an empty net.

Neither side would be able to find the net again in the ensuing 22 minutes, with the point earned - and Bentleigh Greens draw with South Melbourne - ensuring that the Avengers, at least, retained their space in outright first on the table.

Set to travel to Lakeside to take on South in a huge Hellenic Derby next week, the Bergers remained in the fourth position on the table with the draw.

It was very much against the run of play, but coach Nick Tolios’ Greens drew first blood in the 20th minute of their meeting with South when former Socceroo Brent Mcgrath headed a ball into South’s penalty are back into the path of Pierce Waring.

The former Victory and Cerezo Osaka youth calmly fired home from the edge of the area to make it 1-0 and record his sixth goal in seven games.

But a week on from being so unlucky in regards to penalties against Avondale, South finally had some fortune go their way from the spot in the 63rd frame when Henry Hore drove into the visitor’s penalty area from the left and was clipped by defender Jack Webster.

Referee Adam Bavcar immediately pointing to the spot, Marco Jankovic stepped up and made no mistake with his subsequent shot: sending his left-footed effort to the left of Greens’ keeper Javier Lopez.

Bringing down a charging Perry Lambropoulos, Corey Sewell handed Hellas a one-man advantage in receiving a straight red card in the 86th minute, but Hore’s subsequent free-kick bounced off the outside of the Greens’ post and out for a goal kick.

Kieran Dover then had a golden chance to win it for his undermanned side with just minutes remaining, only for his effort to clatter off the underside of the crossbar and bounce back into play, and Daniel Clarke then had an effort for Hellas cleared off the line with what proved to be the last exchange of the game - the points being shared in dramatic fashion.

In the first meeting between the two sides since Waverly City (now Eastern Lions) were beaten 1-0 by Essendon Lions (now Melbourne Knights) at Montgomery Park in 1976, coach Daniel Puşcaşu’s contemporary Lions headed to Knights Stadium not only looking to claim the scalp of their prestigious foes but also put some important space between them and the relegation zone.

These efforts got off to a good start when, in just the 20th minute of the contest, a wayward pass from the Knights’ Anthony Duzel was picked out by Chris Droutsas, carried into the penalty area and poked beyond keeper Tom Manos by the Lions attacker.

But as they have been wont to do in 2021, the Knights ensured that there was to be late drama afoot when a cutback to the top of their foes six-yard-box spilled out to Gian Albano, who fired home just before a sliding challenge from a defender arrived to make it 1-1 in the 85th minute.

But alas for Croatia fans, they were not to have the last word; a Charlie Fry free kick in the 90th minute portending danger for the hosts.

Players from both sides hurling themselves at the loose ball that eventuated, it eventually spilled out for newly-signed Ryan Losty to thunder an effort in on goal and seal a late, and famous, win for the Lions.

That win also meant the newly promoted club move up 11th on the Victorian top-flights table - five points clear of the drop zone - ahead of a visit to second-placed Bentleigh Greens next week.

While the draws between the sides ahead of them ensured that coach Steve Bebic’s Knights remained within a win of second-placed Bentleigh Greens, the defeat, combined with Hume City’s win over Oakleigh Cannons, sees the Knights fall out of the top-six for the first time this season based on goal difference.

Heading over to Jack Edwards Reserve, a well-placed ball from Daniel Dixon found the head of Harry Bingham and gave Hume the lead in that contest five minutes past the half-hour mark - coach Nick Hegerty’s side looking to record their first road win of the season in the Friday evening contest.

Bingham’s goal capping off an action-packed series of early exchanges, the Cannons came desperately close to equalising on the hour mark when Matthew Foschini delivered in a cross that a rising Matthew Thurtell couldn’t maneuver around Hume keeper Michael Weier.

A poor turnover deep in their half from the Hume defence then gave Thurtell a one-on-one opportunity in the 71st that, alas for coach Chris Taylor’s side, Weier once again denied.

Hume then made the hosts pay for their profligacy when a Dixon corner was met at the near post by defender Jordan Maricic and nodded home - making it 2-0 and ensuring that the visitors moved into fifth place on the NPL Victoria table on goal difference.

Elsewhere on Friday night, Green Gully welcomed Dandenong Thunder to town as both clubs sought to close the gap between themselves and the top-six.

Meeting a soaring cross to the back post from Anthony Poljak in the 56th, Gully’s Jay Davies set up the opening goal of the game when he intelligently headed the ball back to the top of the six-yard box for a newly introduced Melvin Becket to stretch out and direct home with his right boot.

It was then 2-0 to the hosts just two minutes later when another looping ball in from the right flank was heavily contested at the near post and spilt out to an open Alex Salmon; the Englishman gratefully firing a left-footed effort into the top corner of the net to make it 2-0.

Nahuel Bonada, though, refused to let his Thunder side slip out of the contest and reduced the deficit to one in the 65th minute when he met a corner fired in from the right with a glancing header that, somehow, found its way through a sea of shirts and into the net.

Thunder’s Argentine sensation then produced something truly special to bring the game back to an equilibrium.

With just three minutes of regulation remaining, he chested down a long-ball forward on the edge of the Gully area with his back to goal and, aware of the presence of on-rushing keeper Jerrad Tyson, skied a bicycle kick towards the goal dropped perfectly to ruffle the net and send the sizable contingent of away fans into raptures.

The point apiece means that Gully and Thunder remain in ninth and tenth on the NPL Victoria table at the season’s halfway point - although they both remain within just two wins of the top six.

Riding the emotional highs of recording their first win of the season over Eastern Lions the week prior, coach Saša Ogeneovski’s Dandenong City was brought back to earth with a thud against Port Melbourne Sharks: downed 2-0 out at Frank Holohan Soccer Complex on Friday evening.

Advancing up the right-flank in the face of City defender Nicholas Dib with just a minute of regulation remaining in the first half, Emlyn Wellsmore set up the Sharks’ first by driving in a perfectly weighted cross for a flying Jackson Courtney-Perkins to meet with his head and send in from close range.

Shrugging off the attention of Hajduk captain Steven Topalovic, Chris Duggan then doubled the advantage of coach Adam Piddick’s side five minutes past the hour mark when he latched onto a ball played in behind his foes’ defensive line and sent a low, right-footed effort beyond looming City keeper Jasmin Keranovic and into the bottom corner of the net.

The three points moved the Sharks to within two of sixth-placed Oakleigh Cannons at the end of the round, while ensuring that the hosts sunk back to the bottom of the table after Altona Magic’s 1-1 draw with St Albans on Saturday evening.

A blocked effort from his teammate Bradley Murray falling very kindly for him, Christopher Dib opened the scoring for visiting St Albans in that contest at Paisley Park by firing in a side-footed effort that, although he got a hand to it, Stefan King was unable to keep out in the Magic goal.

Doing well to battle and win the ball from his marker in first-half stoppage time, Thomas Woerndl subsequently showed great awareness to create the Magic’s equaliser: squaring a sharp pass inside the penalty area for Jonas Markovski.

Using his body to shield the ball from defender Stefan Baricevic as he turned, Markovski then fired a shot beyond Hayden Browne in the Saints’ net and tied things up.

The result means that the Magic have gone throughout the entire first half of the 2021 NPL Victoria season without a win but, because of their high rate of draws - seven in total - occupy second-bottom rather than last and just three points adrift of safety.

That sides three points clear of the Magic is the Saints, who finish the first half of their 2021 campaign with two wins, four draws and seven losses.