As we head into Round 15 of NPL Victoria this weekend, clear title contenders and relegation candidates are starting to appear. The breathing space the league leaders once possessed has now evaporated, while the bottom three are looking up at the mid-table pack through a growing. Meanwhile, its tight in the middle as six points is all that separates 5th place from 11th.

Kicking off the round on Friday night is a tale of two teams with vastly differing fortunes this campaign.

The Oakleigh Cannons have had a week to savour. Wins against Green Gully at the weekend and Melbourne Knights in the midweek Round 11 catch-up game saw them draw level on points with South Melbourne at the top of the table.

Conversely, Eastern Lions couldn’t build on their resolute defensive display against Heidelberg in Round 13, as they lost narrowly to Dandenong Thunder at home, compounding their position at the bottom of the ladder.

The Lions now travel to Jack Edwards Reserve desperately hoping to cause an upset for what would be just their second league win, as they try and turn a corner in the back half of the 2022 season.

Their task will be made no easier by the red hot Cannons, whose leading man Wade Dekker became the outright league leading scorer over the weekend. While Oakleigh will head into this match up brimming with confidence, nothing is a sure thing in this league, and Andrea Lombardo’s Lions could prove to be an ill-timed stumbling block for the Cannons, who find themselves in the thick of the title race. 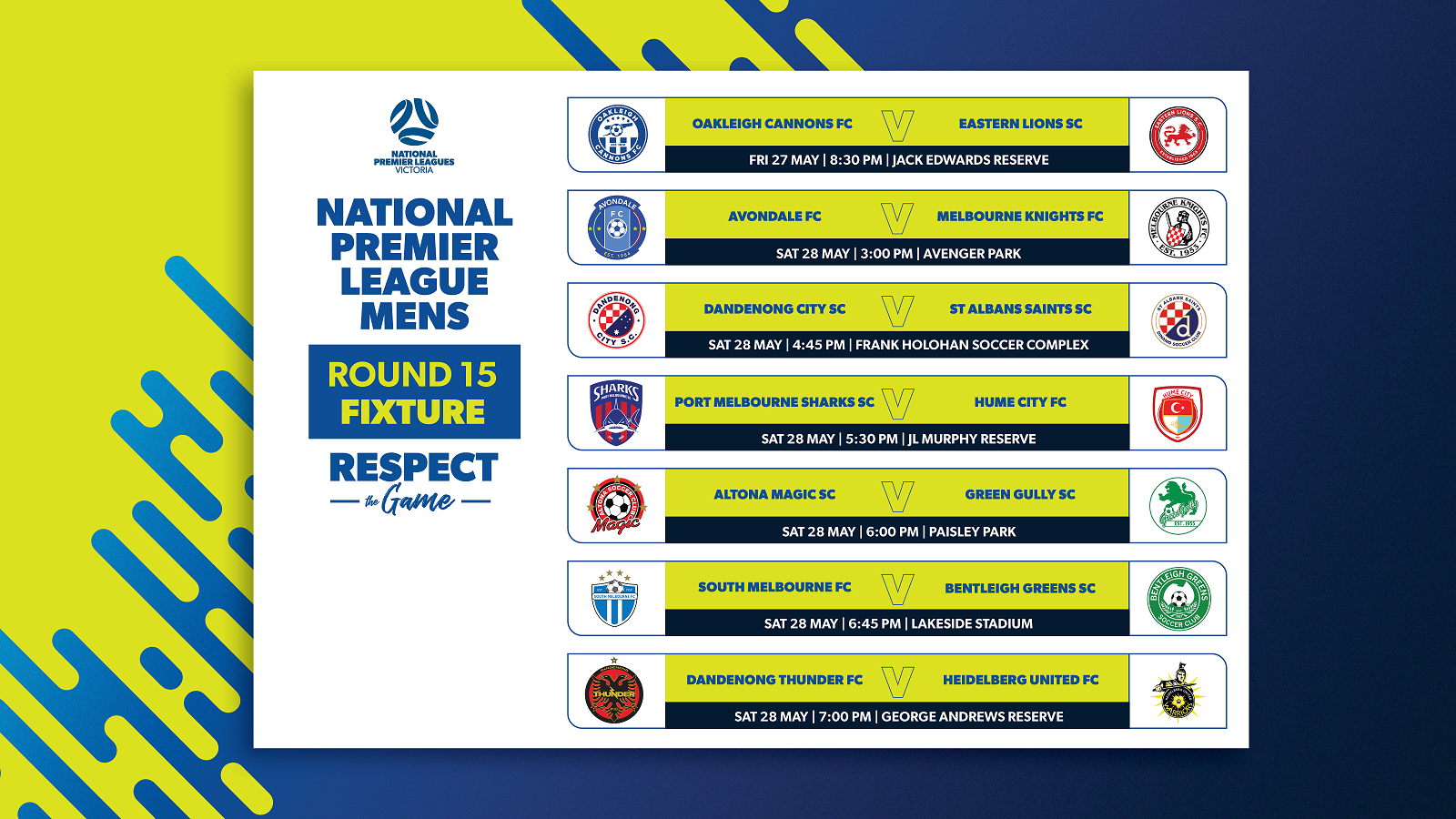 Melbourne Knights’ victory over Dandenong City saw them leapfrog Altona and St Albans in the table before they were brought back down to earth by Oakleigh on Tuesday. They now they now take the trip to Avenger Park to face an Avondale side who’s season has stalled somewhat in recent times.

After a promising start to their campaign, Avondale now find themselves without a win in four league games. After being on the wrong end of South Melbourne’s heroic comeback victory in Round 13, they were able to come from behind themselves to earn a point at Bentleigh Greens on the weekend; thanks to second half substitute Joey Katabian.

Despite the loss midweek, Knights main goal threat Gian Albano has now netted in the past two games taking his tally to seven for the season. Liam Boland has once again been the main man for Avondale, having six goals to his name this season , last scoring from the spot against South Melbourne two weeks ago.

After being as high as second in the table earlier this season, Avondale now find themselves firmly in the middle of the pack and would be only two points ahead of the Knights, should they lose on Saturday.

For the Knights, they will continue to mount their charge up the table and a win could potentially result in another two position jump should other results go their way. However, their position is volatile and they could also see themselves return to the back of the chasing pack should they fail to secure three points.

Dandenong City is in dire straits at the moment, as the weekend's loss to Melbourne Knights coupled with Hume’s victory over the Magic saw them drop into the relegation places.

On Saturday they’ll host a St Albans side also struggling for form of late. The Saints were the suprise packet early in the season, but since defeating Eastern Lions in Round 10, the team has lost four straight. Most concerning for Saints fans is the struggles in front of goal recently, with the Club only scoring twice across that run of games. The lean run has seen them slide to 11th in the table, at the back of the chasing pack, but still eight points above the bottom three.

For City, they must find a spark from somewhere or risk slipping further and further away from the field, with the prospect of relegation now appearing distantly on the horizon.

A last gasp winner from Christopher Dib was all that could separate the two sides in Round 2 and the Dandenong faithful will hope the script is flipped this time around.

After losing two on the bounce in April, Port Melbourne have steadied the ship nicely and have flown somewhat under the radar while they climbed to 3rd in the NPL Victoria table.

A 1-0 win away at St Albans on the weekend made it three in a row for the Sharks and they will look to build on that when they host Hume City this weekend.

After a disappointing start to their season Hume seem to be turning a corner in recent weeks. A win against Eastern Lions at the end of April before dramatically rescuing a late point at Dandenong Thunder a week later; which was followed by a game where they were unlucky not to take a point against in form Oakleigh.

A 3-0 win over Altona on the weekend saw them finally climb out of the bottom two, as they look to keep this momentum going.

They face another tall task again this week, however, against a Sharks side who’s two game blip in April were the only losses the club have been delt this season.

Port Melbourne’s strike partnership of Chris Duggan and Jackson Courtney-Perkins have converted 10 times in 20 matches combined so far, with the latter scoring the winner to down the Saints on Saturday.

Josh Bingham scored his sixth for the season for Hume against the Magic and will look to keep it rolling to give his chance the best side of causing an upset this Saturday evening.

Two sides will look to bounce back to winning ways when Green Gully travel south to Paisley Park to take on the Altona Magic on Saturday night.

After a spellbinding 4-0 win over St Albans in Round 13 the Magic were brought back to reality by Hume on the weekend, and now sit in 10th with only goal difference separating them and the Saints in 11th.

A game that could have seen Green Gully put real pressure on the top two by winning, couldn’t have gone much worse as they fell 3-0 to Oakleigh, finishing the game with nine players on the field.

Gully will be without in form live wire Mamadi Kamara, after a rush of blood saw him given his marching orders just before half time. They will also be without captain Jeremy Walker after he was shown straight red for deliberately handling the ball on his defensive goal line with 10 minutes left to play.

The men in green and white will be hoping that last weekend’s result is nothing more than an outlier as going into the match against the Cannons they had been in stellar form.

Altona, meanwhile, will look to capitalise on Gully’s key outs in the hopes that a win on Saturday could hopefully spark a run of consistent form which they have struggled to find this season.

The Magic’s season has been a mixed bag so far, with impressive victories and disappointing defeats, but they haven’t yet been able to string two wins together.

When the sides met in Round 2, Gully were 1-0 victors, and while February seems like a long time ago, the result will surely be fresh in Altona minds as they look to get one back.

A week ago South Melbourne were sitting pretty, six points clear at the summit of NPL Victoria. Fast forward to today and all that separates them at the top from the red hot Oakleigh Cannons is a goal difference of five.

The warning signs were there when South had to come from three goals down at half time to win their seven goal thriller against Avondale; and a week later they were handed their second loss of the season by Heidelberg United at Olympic Village on Sunday.

This week Lakeside stadium plays hosts to Bentleigh Greens, a side with only four points from their last four games, who would love to take advantage of a South side potentially still reeling just a touch from the events of the last two weeks.

Last Saturday night they let a first half lead slip at Kingston Heath, eventually sharing the points with Avondale.

Piece Waring, one half of Bentleigh’s goal scoring duo alongside Yagoub Mustafa, was out for the clash against Avondale and the Green’s faithful will be hoping the two are back together this week. Between them they have netted 10 times in the league, with Mustafa also converting twice in the Australia Cup.

As for South, finding the net has not been an issue as they lead the league in scoring, led by 10 goals from Harrison Sawyer and contributions of five apiece from Alun Webb and Pat Langlois.

When the two sides met earlier this season, it was an enthralling five goal thriller, and there is nothing to suggest we can’t expect something similar this time around.

After two games away in a row for Dandenong Thunder and two straight at home for Heidelberg United the Thunder will now play host to the travelling Bergers for the final match of Round 15.

This will be the second of three contest between these two sides this season as yesterday they were drawn against each other in the round of 32 of the Australia Cup.

The Heidelberg are proving to be one of the most unpredictable teams in the competition, as a week after being frustratingly being held to a point by bottom side Eastern Lions, the Bergers downed league leaders South Melbourne 2-1 on Sunday.

The impressive result saw them jump up two spots in the table to 8th, however, still two points behind the opposing Thunder, who saw off Eastern Lions 1-0 on Saturday thanks to a second half header from Brayden Mann.

It was the Thunder talisman’s eighth goal in 10 games, in a campaign that has also seen him score a potential goal of the season candidate against Hume City in Round 12.

Heidelberg have usually looked to Kaine Sheppard (nine goals in 14) for attacking prowess this season, but it was the A-League pedigree of Ivan Franjic that shone through at Olympic Village, as his 80th minute header proved the winner over South last round.

Dandenong ran away 4-0 winners when these two last fought it out in Round 2, but with the Bergers’ tails up it’d be difficult to assume a similar outcome this Saturday night.

We encourage everyone to get down to your local game, but if you can't make it tune in via NPL.TV where all games will be streamed live & free.