On May 22, history was made as South Melbourne FC and Brisbane-based Olympic FC competed in the the first ever national blind football match.

Held at the Hangar in Tullamarine, the home of Essendon Football Club, players from around Australia came together to take part in a  a 3-day training camp between 20-22 May.

The camp was followed by the inaugural National Series clash between South Melbourne FC and Olympic FC.

Spectators created a thrilling atmosphere for the clash, as following a tense first half the teams went into the break locked at 0-0. Play opened up in the second period however, with South Melbourne FC seizing the lead courtesy of Brendan Spencer.

Spencer dribbled three players before finding the back of the net and quickly doubled his tally with a well-struck free kick into the bottom right corner. His brace  proved to be the difference as South Melbourne ran out 2-0 winners.

Spencer, who was awarded Man Of The Match was thrilled with his team's performance.

“It was a hard-fought match against Olympic. The skill, the intensity, the camaraderie really showed through with the way we supported and encouraged one another. I am really proud of myself in being able to score those two goals and it has shown the hard work I’ve put toward the game in the gym and on the training track has really paid off,” he said.

South Melbourne Coach Ankit Singh was delighted with the success of the event.

“It was a brilliant match. The whole occasion was beautiful for the players. The result didn’t really matter but it is always good to get one over your rivals.”  Singh said.

Olympic FC will get its chance at revenge as both teams get set for a huge rematch on Sunday 24 July 2022, once again taking place at the Hangar. All Victorian Football fans are invited to attend and watch.

The series and the accompanying national training camps act as preparation for the Asian Cup, which will take place in India during October. 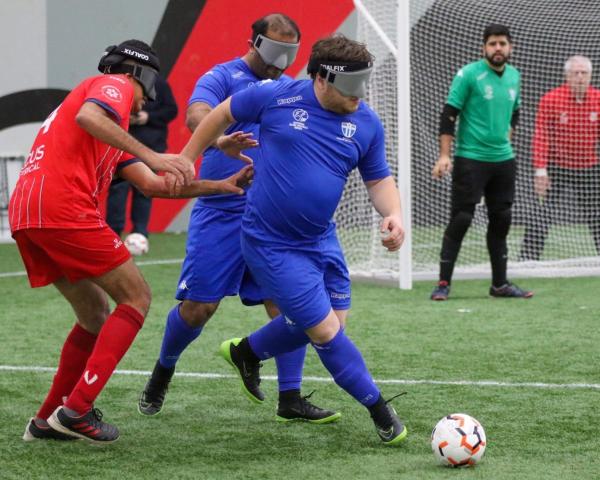 The blind football program at South Melbourne FC is now in its second year. The club hosts fortnightly training sessions for its players between April and October. The club also partners with Football Victoria to run free come-and-try sessions each fortnight for children and those who would like to try the sport for the first time or participate socially

If you would like to get involved as a participant in Blind football, please visit the following link.

If you would like to get involved as a volunteer for the camps, please email Dave Connolly football@blindsportsaustralia.com.au. The next camp dates are Friday 22 July to Sunday 24 July and Friday 14 October to Sunday 16 October, located at the Hangar, home of Essendon Football Club in Tullamarine.