The remaining Round 6 ties of the Australia Cup kick-off tonight, as four more sides look to book their place in the next round following last week's scintillating midweek action.

Two NPL Victoria powerhouses will get the round underway as Dandenong Thunder host the Port Melbourne Sharks at George Andrews Reserve. The Thunder left it late in the last round, piling on three goals in the final 20 minutes to overcome a determined FC Clifton Hill outfit. Slipping to seventh in the NPL Victoria following a 3-3 draw with Hume City and a 3-0 defeat at the hands of Green Gully, the home side will be looking to bounce back and regain momentum. 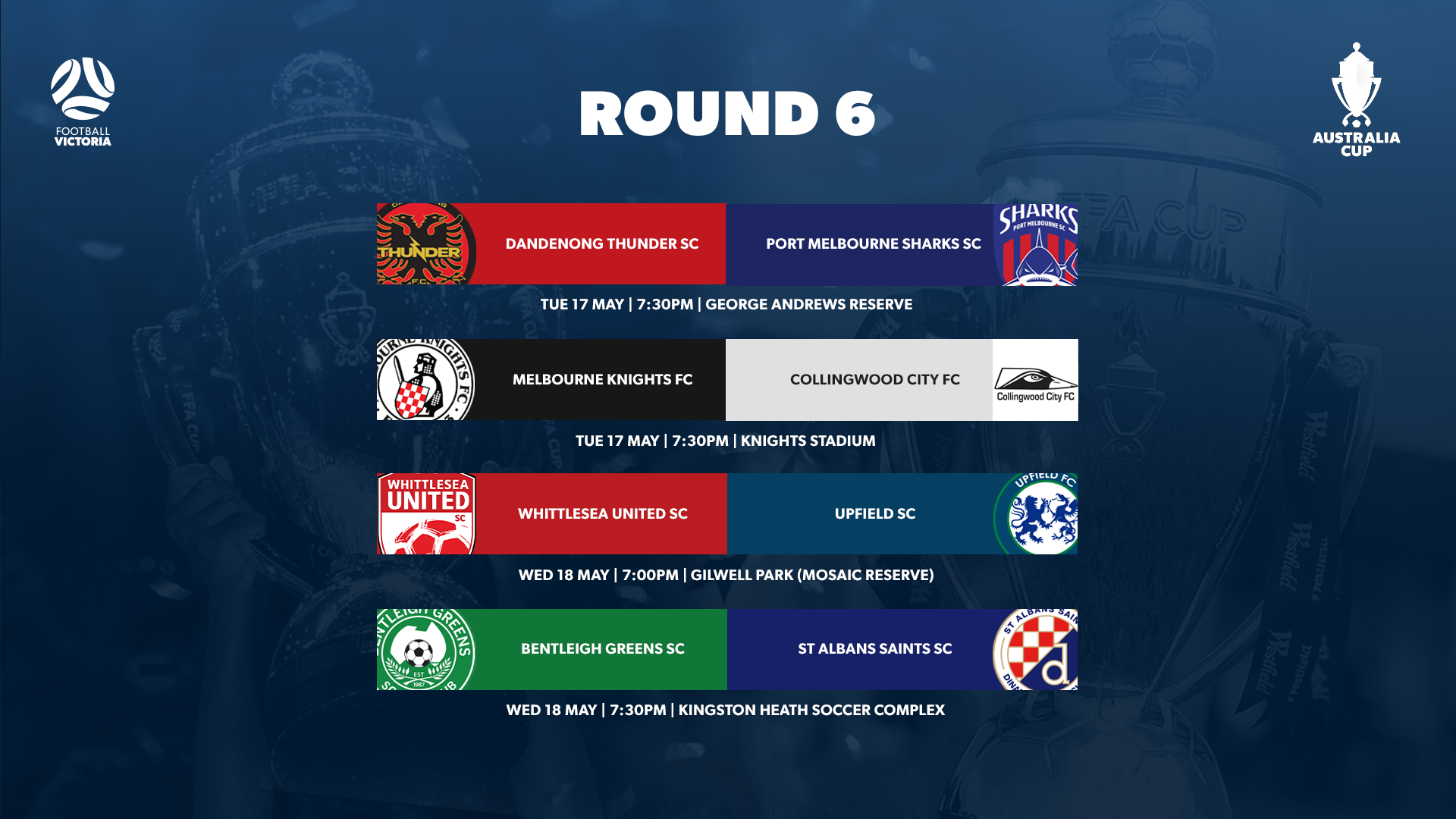 Port Melbourne had it far easier in the last round of the Cup, defeating NPL2 side Manningham United Blues 4-0. To match their Cup form, the Sharks are coming into the game off  back to back league wins and have bragging rights over the Thunder, having won the last encounter 1-0 in Round 5. This promises to be a tight contest.

On the opposite side of town, Knights stadium will play host to a David v Goliath fixture, as Collingwood City travel west to take on the Melbourne Knights. Second in the Men's State League 2, City dominated Elwood in the last cup encounter, winning 5-1 and will come into the game high on confidence off the back of some strong league form. The Knights had a solid showing in the last round of the cup, easing past FC Bulleen 2-0. League form has been a concern though, not withstanding the round 11 washout, the Knights have lost three league games on the trot and have slid to 11th place in the NPL.

Despite the gulf in standings between the Clubs, this match-up represents everything the Australia Cup stands for and the Collingwood City faithful will be relishing the opportunity to be this year's Cinderella story.

Wednesday night will also see two more top-tier sides lock horns as St Albans Saints travel to Kingston Heath to take on the Bentleigh Greens. Bentleigh came from behind to beat Altona Magic 2-1 in Round 5 while the Saints weathered a second half challenge from struggling NPL3 side Whittlesea Rangers to win 4-2.

After a slow start in 2022, the Greens have steadily climbed the table and secured a spot in the top six after snapping a three game winless streak over the weekend with a gritty 2-1 win over Dandenong City. St Albans on the contrary exceeded expectations early in the season, but after an early surge three league defeats in a row have seen the Club slide into mid table. Both Clubs will be eager to reignite their seasons with a deep cup run.

Rounding out the cup ties is the sole all-State League tie between State League 1 Whittlesea United and State League 2 Upfield SC. Upfield head to Gilwell Park having yet to lose a game this season, with six wins and two draws. It took extra time for Upfield to get through Beaumaris 2-1 in the previous round, but having already taken the scalp of a State 1 team the underdogs will be brimming with confidence.

Whittlesea United won't shy away from the challenge though. The club has won two - yes two - consecutive penalty shootouts against the Doncaster Rovers then Williamstown SC. The drama continued in Round 5 of the Australia Cup as the Whittlesea once again defied fate, storming home against the Keilor Wolves thanks to an 88th minute equalizer followed by two extra time goals.

By continuing to survive and advance, Whittlesea United is proving to be something of a cup specialist this year, Will the Club's dramatic run continue? Or will the inform Upfield SC once again prove too strong for a higher ranked opponent? It shapes up as a must watch contest.

While we encourage you to get down to your local game and support your team, Football Victoria is thrilled to confirm that ALL games will be streamed live and free to Facebook, Youtube and NPL.TV.