The draw for the penultimate round of the Victorian preliminaries for the Australia Cup features a rich mixture of NPL and State League Clubs, setting up a massive round of action. In Part 1 of our Australia Cup preview, we highlight the six fixtures taking place this week.

20 Clubs have been drawn in Round 6 and will be vying for a place in the final preliminary round, which ultimately could lead to a chance to meet a an A-League heavyweight in the round of 32. 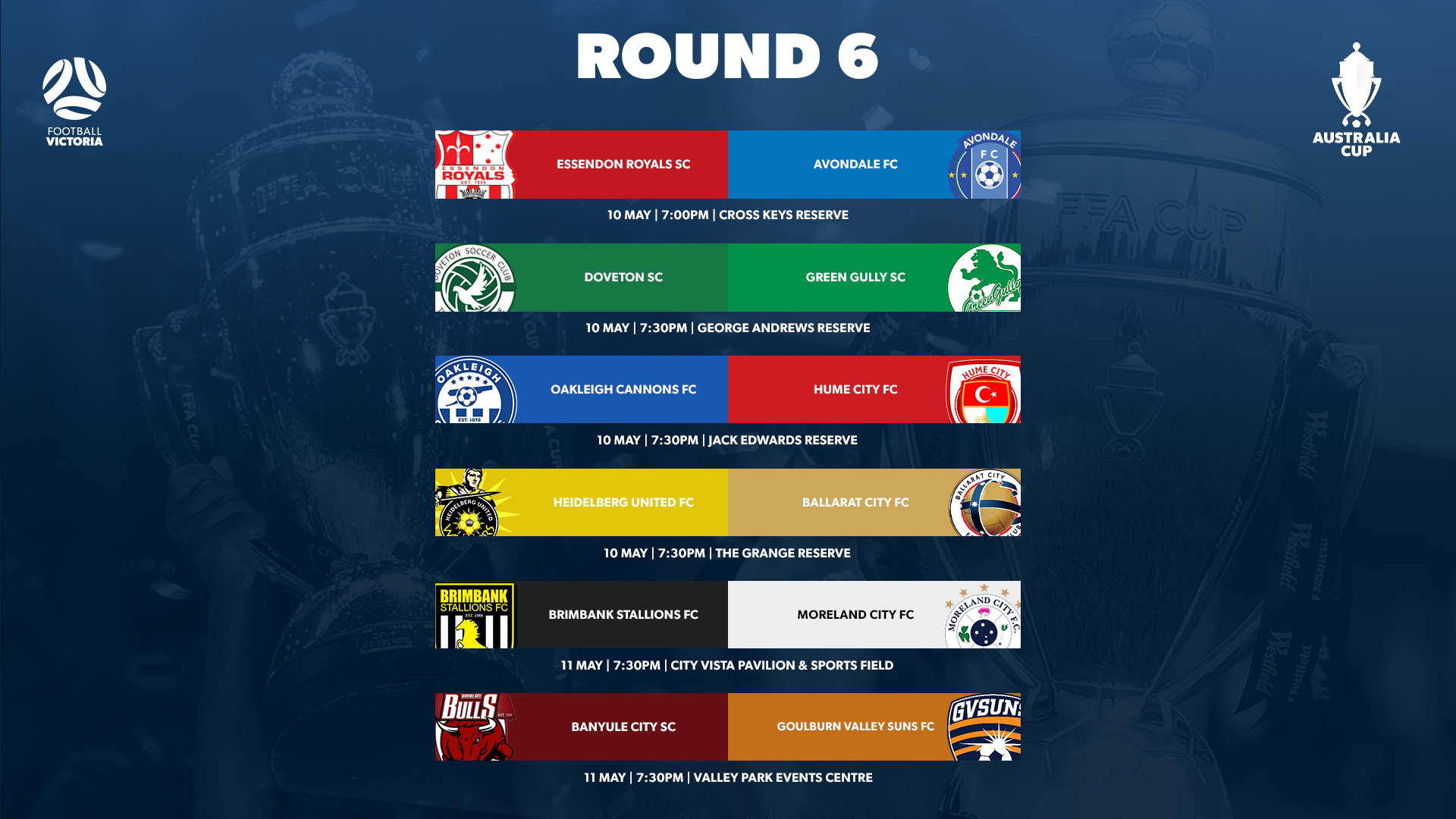 Kicking first on Tuesday is State League 1 side Essendon Royals hosting NPL Victoria powerhouse Avondale FC. The Royals currently sit 6th in State League 1, albeit with a game in hand after a frustrating two weeks in the league. A washout against Brimbank Stallions was followed by a 3-0 loss to Corio FC, with the Royals going down to 9 men in the first half. The red cards mean Greg Lombardo and top goal scorer Graham Kelly will miss this tie, but on the positive side Essendon's Cup form has been tremendous.

Essendon stormed home in the second half against fellow State League 1 side Eltham Redbacks to win 4-2, after defeating NPL2's Moreland Zebras 2-0 in the previous round, thanks to a wonderstrike from Irish talisman Ryan McEvoy.  Avondale, currently sitting 3rd in the NPL won a hard fought battle against Kingston City in the last round of the cup, with Manny Aguek's last gasp equaliser forcing the tie into extra time before finishing strongly in a  thriller. Zoran Markovski's side will be keen to get back to winning ways after also experiencing a frustrating fortnight in the league, drawing 0-0 with Dandenong City before going down 3-1 to Heidelberg United last Saturday at Avenger Park.

Next will see two sides at opposite ends of the NPL Victoria table faceoff as Oakleigh Cannons host Hume City. Yet to play in the league yet so far, this will be the first competitive clash between the sides in 2022. The Clubs have endured different fortunes in the league to date, with the Cannons sitting in 2nd place  after 12 rounds, while Hume lie second from the bottom. Oakleigh flexed their muscles in the their last Australia Cup tie with a brutal 12-0 win victory over State League 5 side White Star Dandenong. Despite a challenging season, Hume will take confidence from its recent performances. An Australia Cup Round 5 win against Dandenong City has sparked a mini revival with the team going on to find its first NPL win of the season against Eastern Lions, followed by a last gasp equaliser in Round 12 to rescue a point against Dandenong Thunder.

Licking their wounds from the 6-0 thrashing given to them by Melbourne Victory on the weekend, NPL 3 side Ballarat City have a chance to bounce back against NPL Victoria side Heidelberg United, who will be boosted by a 3-1 victory over Avondale FC on Saturday. Both teams have performed similarly in the league, sitting 9th and 10th in their respective league tables. In the Australia Cup, Ballarat City head into this clash on the back of a 4-1 win over Springvale White Eagles, while Heidelberg put five past Altona East Pheonix. A deep cup run could be the catalyst for either team turning their season around. With the expectation heavily on the shoulders of Heidelberg, the travelling side will hungry for an upset to make the trip down to Melbourne a memorable one.

Doveton SC is struggling to replicate the success it had last season, but there’s nothing like hosting a tie against an NPL Victoria giant to galvanise the Club. Picking up a second win in the league this term, a 4-1 over North Sunshine Eagles FC, Doveton SC will looking to build on it's Australia Cup run after a comfortable 5-2 win over State League 3 opponents Whitehorse United in the last round. Visitors Green Gully sit 5th in the NPL Victoria table after back to back 4-0 victories and find themselves just one game off 2nd placed Oakleigh Cannons. A hattrick from Mamadi Kamara saw them ease past State League 1 opponents Fitzroy City in the last round and the former Australia Cup quarter-finalists head into this clash full of confidence.

The first of two cup fixtures on Wednesday provides another State League team with a chance to channel the Magic of the Cup as State League 1’s Banyule City take on Goulburn Valley Suns from NPL2. Last round saw both teams defeat NPL3 opposition, as Banyule upset Box Hill United 3-2 and the Suns put North Sunshine Eagles to the sword, winning 5-0. The sides have had differing starts to their season, Banyule sit in 2nd place in the league while Goulburn Valley are bottom of the NPL2 table. Despite their struggles this season, the Suns cup form has been sound, thrashing North Sunshine Eagles FC 5-0 at home in the last round.

State League 1 side Brimbank Stallions face an uphill battle when they host NPL2 league leaders Moreland City. Brimbank have had a good start to their season in their own right, sitting 3rd in the league table and beating fellow State League 1 side Yarraville in the previous round of the cup. However, the visitors will travel to City Vista Pavilion undefeated in 2022, averaging more than three goals a game so far. Moreland City put away their State League 4 opponents Watsonia Heights 5-1 as their strong start to the season means they will head into this clash as heavy favourites.

While we encourage you to get down to your local game and support your team, Football Victoria is thrilled to confirm that ALL games will be streamed live and free to Facebook, Youtube and NPL.TV.