Congratulations to the winners of the 2021 FV Community Awards!

The response from the football community was tremendous following the call for nominations in late September. FV would also like to thank and acknowledge all of the nominees in addition to all of the other volunteers, administrators, Clubs, coaches, referees and people in our community who contribute making our game so special. 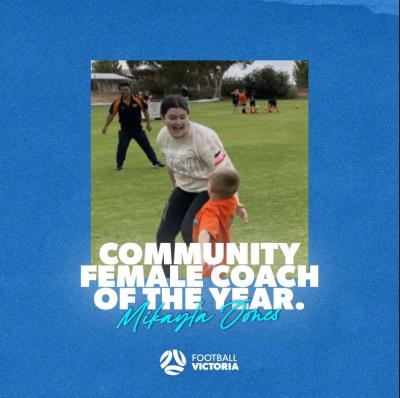 A 17-year-old who plays senior football for Nichols Point, Mikayla has made a considerable impact on her football community since she started coaching. Incredibly, in addition to playing she coaches the Under-6s and Under-8s while acting as an assistant for the Under-13s and Under-16s.

Mikayla has been nominated for her exceptional ability to communicate effectively with the younger players and act as a positive role model in her community. She has been praised by parents, players and coaches for connecting with her younger players in a meaningful way and ensures training is always training fun, engaging and educational. 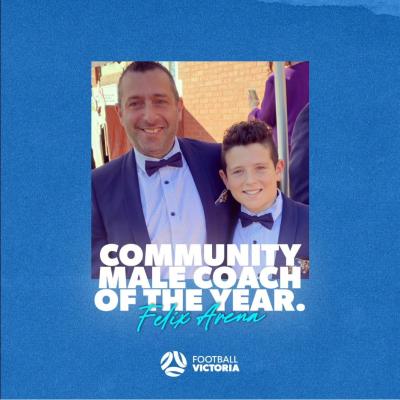 Felix founded the Somerville Eagles SC and has had a remarkable impact since stepping in to coach the Club’s Under-13s team. His ability to keep the boys engaged through goal-setting and documenting progress has led to strong improvements throughout the group and most importantly, an enjoyable atmosphere which promotes growth and development.

Felix has gone above and beyond for several of his players who have special needs. He has created a safe and inclusive environment where everyone feels safe and can football. He was also instrumental in maintaining engagement during Victoria's lockdown through hosting online quizzes and other activities. 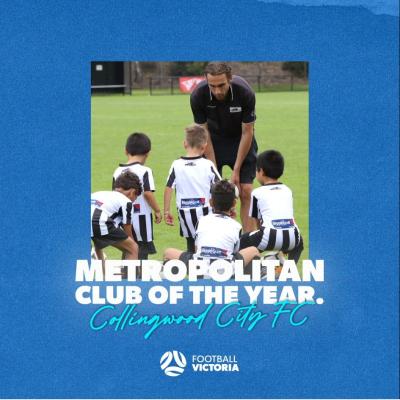 With more than 500 junior players, CCFC has built a strong program that emphasises enjoyment and player development. Every team has at least one dedicated coach, many two, who have progressed through the Club’s education system and focus on providing their players with the best possible opportunity to thrive.

The Club holds a 5 star rating in the National Club Development Program and is an enormous presence in its community on and off the pitch, supporting its players with educational workshops, resilience building exercises and on the ground coaching courses.

CCFC lives and breathes diversity with something to offer for anyone wanting to play the world game. There are 120 female players at the Club and it has invested in having female specific uniforms, female-only changerooms and access to the best training grounds for all its players. The Club also has more than 40 All-Abilities players, runs kinder programs, holiday clinics, Come and Try Days and a Soccer Mums program. 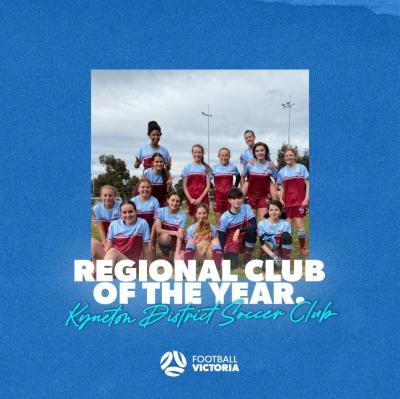 KDSC is a fully inclusive football Club which prides itself on being a home for people of all abilities, cultures, genders, orientation and age groups.

The Club has displayed a commitment to inclusion, striving for 50/50 gender representation at committee level and has put considerable efforts into sustainably growing female participation in the region. Its program has grown from 25 females in 2013 to 132 in 2021, a number which represents 42% of its overall player base. KDSC is looking to further build on its existing program and is developing an All Abilities program through engaging local schools and families in the area.

The Club also provided full first aid training to its members in 2021, upskilled its coaches through formal qualifications and consistently went above and beyond to support its community during a challenging year with COVID-19. 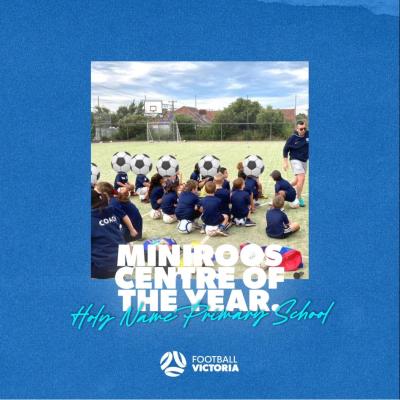 Based in Preston, Holy Name Primary School has a network of dedicated parents and staff who have created an inspiring program for kids aged between 4-11. The school has a ‘no-profit’ motive, meaning all funds are directed back to improving facilities and opportunities for its players.

Holy Name prides itself on being accommodating to families of all backgrounds and cultures, resulting in a strong bond forming between people in what is a heavily multicultural community in Melbourne's north.

This approach has led its Miniroos program to thrive. 30 kids signed up for Holy Name’s Autumn program with the highlight of the year being a Family Fun Day where the Miniroos program was the shining light that brought kids and their families together through their common interest of football. With another 60 kids expected to take part over Summer, Holy Name Primary School’s Miniroos program is continuing to go from strength to strength. 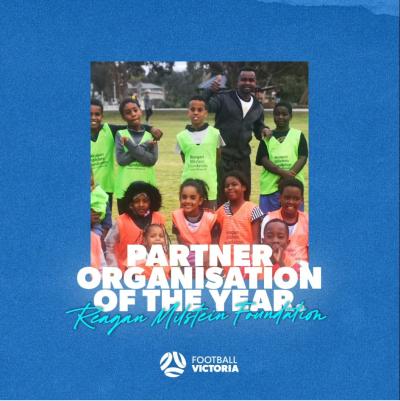 RMF collects pre-loved and unused sports gear and delivers it to less fortunate communities both locally and around the world. A long-term supporter of refugee communities, indigenous youth, people with disabilities and other disadvantaged groups, RMF does an incredible amount of work to reduce barriers for people to play our game.

To date, the foundation has been able to supply communities with over $800,000 of gear in replacement value. Thanks to this dedication and generosity,  RMF has opened the door for countless people who have faced adversity to live and love football. 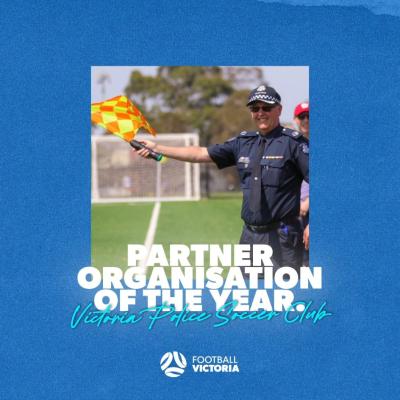 VPSC truly showcases how football can be used as a vehicle for positive change. VPSC doesn’t play in a league, but rather plays showcase matches designed to build bridges in the community or raise funds for much needed causes.

The Club is renowned for its commitment to developing relationships with disadvantaged youth and people from culturally or ethnically diverse backgrounds. These events are recognised as best practice methods to break down barriers and build relationships within community. 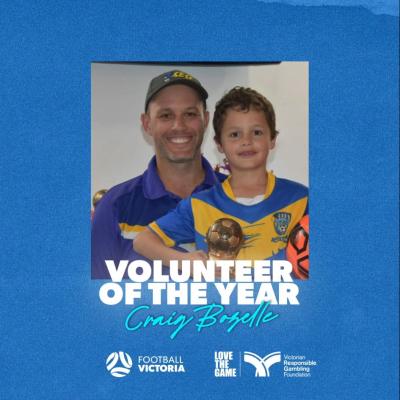 A parent at the Somerville Eagles, Craig is said to be the heart and soul of the Club. His commitment to the Eagles’ community is simply incredible - he coordinates all of nine junior teams, Coaches the seniors, acts as the barman, manages the canteen, referees junior matches and is a major sponsor.

He performs all these tasks and many more with a smile on his face and every week is known to bring an esky full of drinks for the kids and cooks for the players. Generous with his time and efforts, he stores much of the Club’s equipment, cleans and when the Club couldn’t afford a new set of goals for the juniors, he hand-made a set that he transports to and from trainings and matchdays.

With people like Craig at the helm, the Club has grown its junior program from one team to nine in just four years, including two girls teams and an All Abilities program. Although he is known for his humility, he was nominated by his peers as in their words “He is the most hard-working person we know and he always puts everyone else before himself”. 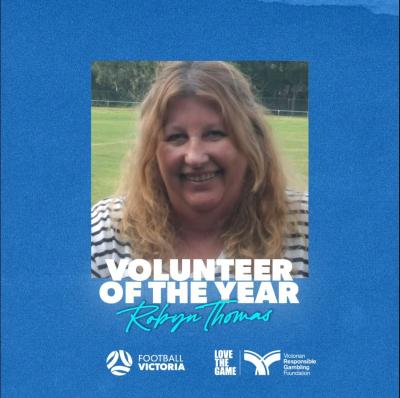 Robyn is the Club Secretary at Brunswick Juventus but has gone far beyond her official role to become a pillar of her local football community.

She manages many of the behind the scenes tasks and is known for her fair approach with organising venues and allocating resources, ensuring that everyone gets an equal opportunity regardless of age, skill level, gender or background.

Robyn is involved in every aspect of running the Club and is a passionate advocate of inclusive participation. She has been the driving force in growing Juventus’ female program and advocates for the refugee community, working with people and families to ensure that no one gets turned away from playing the beautiful game.